No matter how bored with it you are now, you have to admit that the original Wii Sports (the launch game that was included with the Wii) provided a very memorable experience. Seriously, look back in time before all the “dust off my Wii” jokes and horrific wave of waggle minigame fests. Remember the first time you opened the Wii box, set up the console, and played Wii Sports for the first time? It was a pretty unique, and altogether magical experience, am I right?

With the sequel Wii Sports Resort — which comes packaged with the much talked about Wii Motion Plus peripheral — Nintendo is hoping to create a little of that unique gameplay magic once again.

But how does this new collection of motion-controlled sports games play? And is all the hype surrounding the Wii Motion Plus warranted? Hit the jump for my hands-on impressions of Wii Sports Resort. 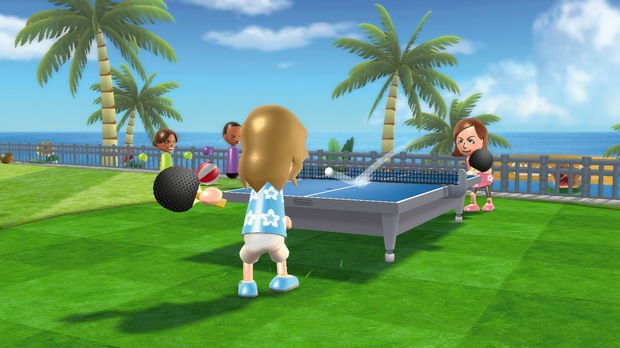 I know the first thing I say is going to make most of you want to comment right away, but hear me out for a second.

The Wii Motion Plus accessory that plugs into the bottom of the Wii remote is amazing. It truly changes the way Wii games are played and will have you feeling the same excitement and wonder for the Wii as you did the first day you got it.

Now, here is the part where you want to comment and say “it should have been included in the original technology of the Wii remote.” To that I … well, I really don’t have anything to say. That comment is completely right. Once you pick up a Wii remote with Wii Motion Plus and genuinely see what it is like to experience 1:1 3D movement you are absolutely correct in wondering why the original controller didn’t respond like this.

My only (annoyingly positive) thought is this: I genuinely feel the advanced technology did not exist at the time of the Wii launch (well, at least to Nintendo it didn’t). While it sucks to have to use a new accessory to mimic what the Wii should have done in the first place, at least Nintendo is upgrading its own equipment and not just letting us, the players, suffer with inferior technology. Basically, I am just happy that my Wii remote is fancier now. The Wii Motion Plus is an enormous step up in terms of motion control and that is, in the grand scheme of things, a good thing.

Now, on to how this cool new technology worked in relation to Wii Sports Resort.

Wii Sports Resort includes twelve sports events — a huge step up from the five that were in the original game. And some of these twelve activities actually include sub-events, such as when you choose Frisbee and are approached with the choice of Dog Frisbee or Frisbee Golf. While both control similarly, they are completely different games. Because of these branching events, the total amount of sports in Wii Sports Resort jumps up to over twenty.

To get my impressions explained quicker, I will just focus on a few of the sports I liked the best.

Archery is probably my favorite of the new sports included in Wii Sports Resort. Basically, you choose a difficulty level, stand in place, and shoot arrows at an increasingly distant target. It sounds simple (and dull), but the actual gameplay is pretty awesome.

To shoot an arrow, you have to hold the Wii remote and nunchuck vertically, right next to each other, in front of you (just like how you would hold a bow and arrow). As you pull back the nunchuck towards your face and hold down the C button, increasing the power of your shot, the aiming circle on the screen gets smaller and smaller. In addition to this, the added motion sensor in the Wii Motion Plus accessory senses each and every little movement of your hands and arms, making the screen shake every time you make a real-life movement. When you are ready to fire, you let go of the C button and the arrow goes flying, accompanied by a very satisfying “woosh.”

This event may not show off the Wii Motion Plus peripheral perfectly, but the way you handle shooting the arrows in the game is both super intuitive and very fun. 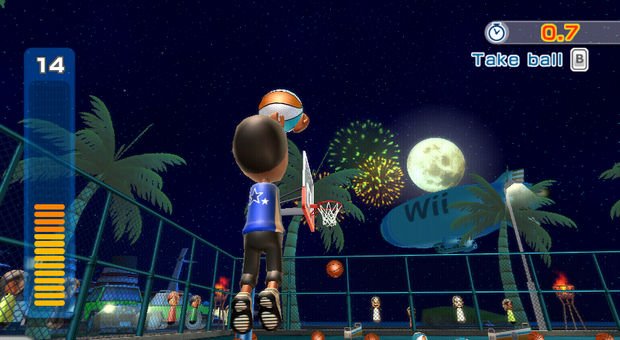 I didn’t think I would like basketball, but of the two modes I played, 3-Point Free Throw was the best (the other was an actual 3-on-3 game that involved passing, dribbling, and shooting). In 3-Point Free Throw, your Mii stands at five different positions on the 3-point line and is given five balls to shoot into the basket.

The controls in this game are brilliant. You just simply push B to pick up a ball (you don’t even have to hold the button down) and then just gesture the Wiimote into the air just like you would throw a basketball. It is hard to explain without physically having the game to show you, but the Wii Motion Plus accessory is so accurate that you really have to shoot the ball like you would in real-life. There is no more of that lazy, flicking of the wrist cheat you can use in something like the first game’s Tennis. If you do that the ball will go out-of-control, You really have to swing the Wii remote in the air, and flick your wrist in the perfect way to get the ball to land in the basket.

The whole experience just feels so fluid and really cool. 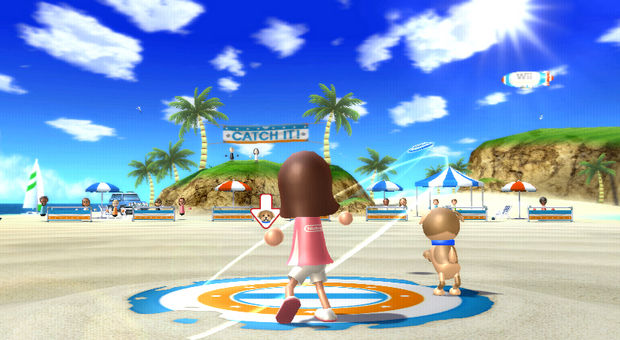 I played this sport at last year’s E3 (as well as Fencing and Jet Skiing), but it is worth quickly mentioning again. Basically, you grab a Frisbee and throw it towards a target so a ridiculously cute dog can catch it for points. There is not much to it, but, again, throwing the Frisbee is so accurate it is scary. 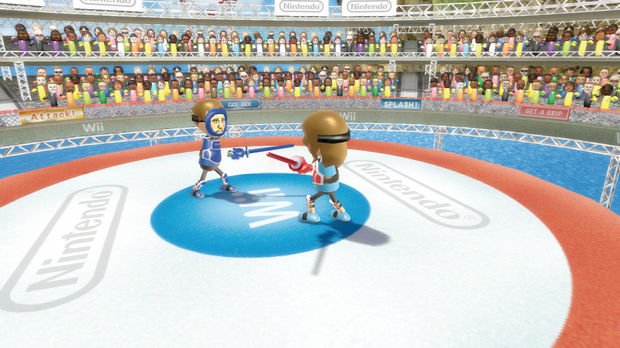 For a true example of Wii Motion Plus’s potential, try out Fencing. In the activity, you duel with another player on an elevated platform. By swinging your Wii remote, you have to try to knock the other person off the platform.

What is truly revolutionary about this event is how the sword controls in your hands. You grasp the Wii remote with two hands (no nunchuck needed) and swing it around just like you would a real sword. But I swear, I kid you not, the sword moves in a 3D environment exactly as it does in real-life. And don’t think that means just a simple waggle back and forth like so many other Wii games try to get away with. When using the Wii Motion Plus, the sword can be turned, pointed, even moved behind your back or under your legs and the in-game sword will do the exact same thing. Seriously. It is almost fun just to stand there before attacking and just marvel in the fact that the Wii remote and the sword move exactly the same. This perfect motion control can even be used to defend against incoming attacks by holding the sword in just the right place. It is such a cool thing. 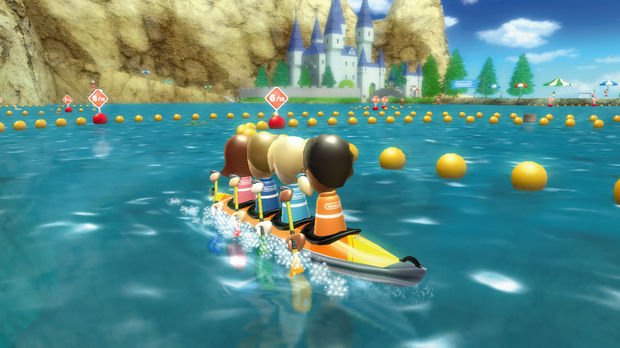 Those are my four favorite sports, but all the others are really fun as well. Sky Diving involves moving the Wii remote around, mimicing the movements of the falling Mii on-screen; Kayaking has two players racing each other, using the Wii remote as a paddle, swinging and switching back and forth to row down a river; Jet Skiing uses both the Wii remote and nunchuck as handles of a Waverunner, allowing them to be rotated towards you for acceleration.

Even classic Bowling and Golf return from the original game, this time with new Wii Motion Plus control that makes everything that much more fun and accurate.

Wii Sports Resort is not a “hardcore” game, but it doesn’t pretend to be. It is just a really entertaining, technologically impressive, surprisingly pretty party game that offers hours of harmless fun for up to four people. A lot of my friends don’t play videogames, but I know they will fall in love with Wii Sports Resort. It is a blast to play and is guaranteed to bring back those nostalgic feelings you once had when the Wii was truly something special.

Based on my hands-on time with the game, I am giving my impressions of Wii Sports Resort an 8.5.*