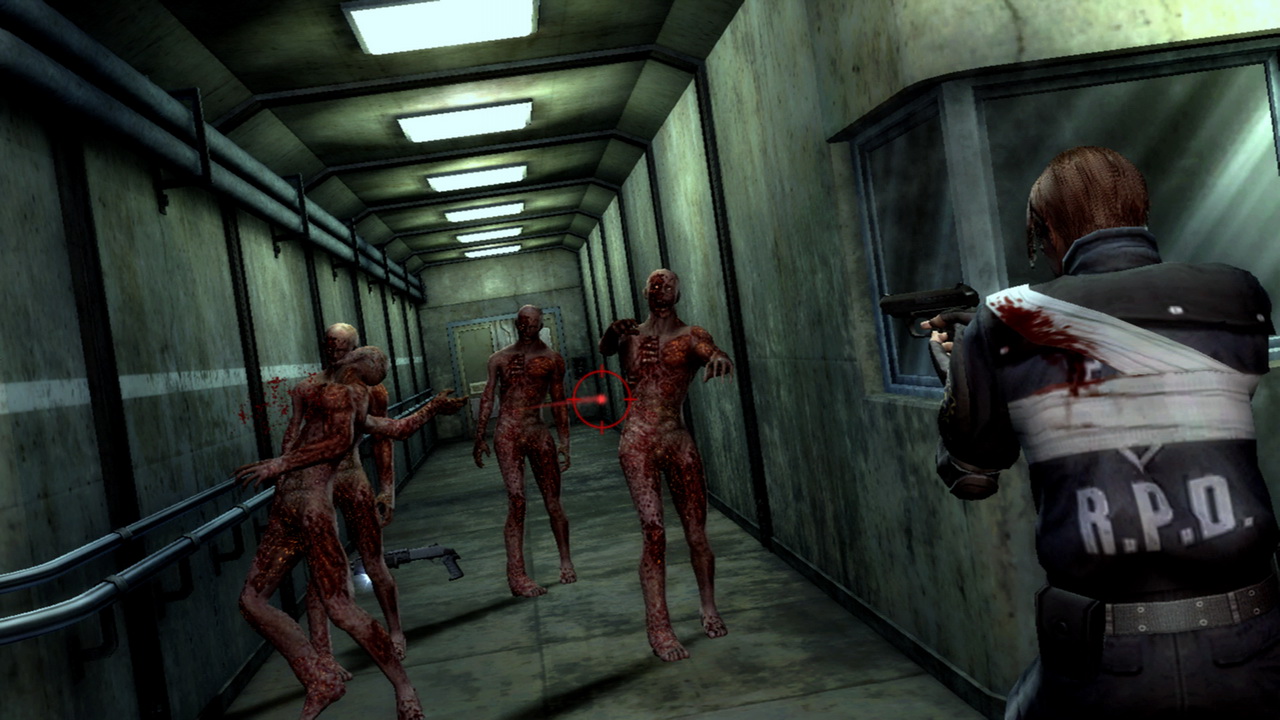 I liked Resident Evil: The Umbrella Chronicles a lot, but after finishing it, I had no desire to play a sequel. It worked for what it was, but there was nothing about the game that made me want to see more. You can guess that when Capcom announced Resident Evil: The Darkside Chronicles, I was pretty underwhelmed. My gut reaction was that it just wasn’t a game that needed to be made.

Still, this is Resident Evil we’re talking about. Other than the Outbreak games, which were of questionable quality, the series is yet to fail me. Plus, mining material from Resident Evil 2 and Resident Evil: Code Veronica is sure fire way to tickle my nostalgia bone. With both my initial disinterest and my always present love of the RE franchise in tow, I gave Darkside Chronicles a spin on the E3 show floor.

Hit the jump for my thoughts.

The first thing that hits you when playing Darkside Chronicles is how much better it looks than it’s prequel. Umbrella Chronicles looked alright, but in part because it relied so heavily on reusing of graphics from RE Remake and RE Zero, the whole visual experience was a little uninspiring. Darkside Chronicles suffers from no such issues. The game is clearly costing Capcom quite a chunk of change to make. It features all new, highly detailed polygon models, some nice bloom lighting tricks, great blood splatter effects, and so highly competent character animation. On the Nintendo show floor, the game is being presented right next to Dead Space Extraction, which just begs for a head to head comparison. I’d give Extraction the leg up on visual detail in regards to the backgrounds, but when it came to effects and character models, Darkside Chronciles had a slight edge, though both games looked pretty damn nice.

In terms of how the game plays, Darkide Chronicles’ biggest improvement over Umbrella Chronicles that I noticed is the in-game camera. A lot of effort was made to give the game a Blair Witch Project/Diary of the Dead sort of feel. Water (or blood, depending on the situation) spatters realistically on the camera lens, which works well to explain to the player right off as to why they aren’t in full control of the player movement. This isn’t a game about being someone stuck in a zombie hell, it’s about being the gun-toting arm of someone stuck in a zombie hell, who’s also is filming a documentary about it.; a someone you’re tasked to protect from danger, despite the fact that they are such a shitty cameraman.

It’s this shitty camera work that really makes Darkside Chronicles a step up from the original in regards to tension and psychological believability. Being at the mercy of a camera direction of a terrified idiot does a ton to keep the game feeling real and unpredictable.

The first level I played through was based on Code Veronica, and featuring Claire Redfield and that doofus Steve Burnside bas the take in their surroundings and making a brief battle plan. This all takes place at the iconic Code Veronica graveyard that shows up early in the original game. Before you know it, zombies are rising from their graves left and right, but dumbass Steve Burnside (our camera man) is usually too freaked out to focus on any of them for long enough for the player to get a good shot in. He pans the camera to the left and sees a zombie standing in place, swaying harmlessly. Then he quickly pans over to the right, where two zombies are coming at Claire. You have enough time to get in maybe one shot before Steve pans over to the left again to see that the swaying zombie has come a lot closer. Just as you try to take a shot, Steve pans the camera to the right again, this time to see Claire getting attacked by a disgusting (but  very well rendered) naked zombie. It only takes a couple of shots to get it off her, but by the time you do, you can bet your ass that that zombie to the left is going to be right in your face next time you get at look; and it is; and it takes a huge bite out of you; and it’s awesome.

That wasn’t the only well thought out use of the in-game camera that I witnessed in my brief time with the game. Whenever the game blesses you with one the classic RE “cheap scares” like the appearance of the first licker drooling on your head in RE 2 chapter, or the zombie being dragged off into the basement window in RE:CV, the camera felt extremely smart in its movement and timing. Maybe it’s just nostalgia-goggles talking, but there was something extremely fitting about playing through classic RE scenes from the first person perspective, but without the ability to control the camera. The classic RE games never let you control the camera either. In fact, those games were well known for intentionally sticking the camera at odd angles in order to create a pseudo-cinematic sense of tension, as well as keep the player from seeing the location of enemies so they may more easily scare the hell out of you. Darkside Chronicles looks to maintain that tradition, only from a pseudo-documentary view, and so far, it’s working.

The game is planned for a winter release, which I’m led to believe means early next year.