When I saw the unveiling of New Super Mario Bros. Wii I got all traditional Chad excited and all (ya’ know: arms flailing, high pitch screming), but it wasn’t until later when I realized what is pretty darn significant about this upcoming Wii release: New Super Mario Bros. Wii will be the first traditional 2D Mario game played on a big, normal television set since the days of the SNES. Seriously, that is crazy!

Once I realized this, of course, I got even more excited and couldn’t wait to get my shaky little hands on the game on the E3 show floor.

But did I like it? Well, it is me we are talking about, so unless the game actually figured out a way to punch my own mother in the face, I was probably going to love it. But, hey, maybe that happened? You won’t find out if New Super Mario Bros. Wii punched my mom in the face until you hit the jump and read my hands-on impressions. 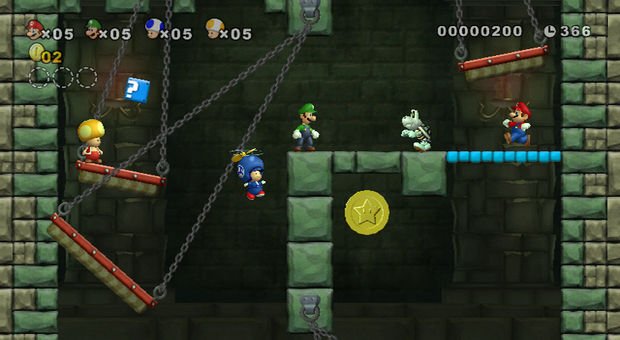 As most of you know by now, New Super Mario Bros. Wii is a sequel of sorts to the best-selling game of the same name (sans the “Wii” part) for the Nintendo DS. Luckily, it is a brand new game and not just a simple upgraded port. Whew!

Most significantly, the game features simultaneous 4-player co-op, which is a first for a Mario game. And before you jump into the comments, yes, playing it reminded me a lot of The Legend of Zelda: Four Swords Adventures for the GameCube. And that is most definitely a good thing (I love that game!).

Oh, and one more thing before I give you these impressions: I was a little concerned that New Super Mario Bros. Wii would be nothing more than a multi-player party game without a significant story or any really emphasis on playing by yourself. To my relief, however, the Nintendo associate informed me that New Super Mario Bros. Wii is a full, traditional Mario adventure (world map, bosses, and all) that can also be enjoyed with up to four players (obviously this way of playing being the best).

So, while the game was designed with multi-player in mind, there are no worries about being able to tackle this epic Mario adventure with none other than you, a bowl of ice cream, and your cute puppy sleeping at your feet. Great news for single players like me!

As for the game … well, how should I put this: it is quite the awesome experience. 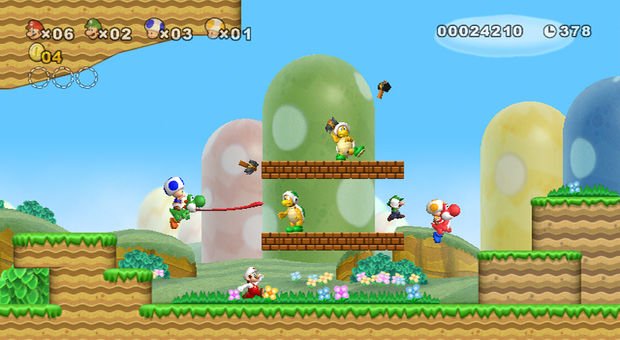 Imagine everything you love about every Mario game and putting it together in a slick, polished, multi-player package. At the Nintendo booth on the show floor, New Super Mario Bros. Wii could only be played with four players. If there weren’t enough people to play (that was never a problem), the Nintendo associates would jump in to give you the full experience.

Playing a Mario game with other people on the screen at the same time sounds like nothing special, but in practice it is unique, addictive, and gloriously entertaining. Everything about a normal Mario game is intact: you run around, collecting coins, stomping enemies, and bashing blocks to find hidden power-ups. In New Super Mario Bros. Wii, however, all of this is a given a slightly competitive edge. At the end of each level, when playing with more than one person, the game tallies how many coins were collected and how many enemies were defeated. Each type of coin and each type of enemy is given a point value, and whoever has the most points at the end of a level is the victor! In a cool twist, whoever hits the traditional Mario flagpole at the end first gets a little bonus, while the other players only have three seconds to grab the pole as well to receive any extra points at all.

The demo offered a whopping ten different levels to play, each displaying classic Mario settings, from a desert landscape to a field of ice. Inside each of these levels is some of the most creative and giggle-inducing level design you have every seen: platforms sway from side to side, giant gears turn in out of huge pools of lava, platformers twist and turn in the air over bottomless pits. And all of this looks absolutely beautiful. If you missed 2D graphics before, you will almost start to cry after playing New Super Mario Bros. Wii. The way the sprites rotate and the backgrounds scroll — it’s all classic stuff and will leave any retro fan with a giant smile on their face. 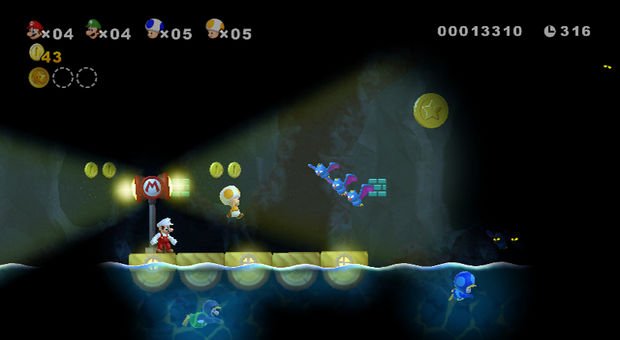 As far as control goes, I know there are a lot of people that are concerned it may feel like the far too floaty New Super Mario Bros. for the Nintendo DS. The good news: it feels much better than that game — characters move a lot less like they are constantly walking on a bed of ice. The bad news: it still is not as tight (as of now) as some classic SNES 2D Mario games like Super Mario World or its sequel, Yoshi’s Island. But, rest assured, it feels fine and just as intuitive as any Mario game that has come out before it.

One of the best things about the game is just how clever the multi-player stuff comes into play. For example: there are three giant Mario coins in each level that are worth a ton of points. A lot of times they are in tough locations that can only be accessed with the help of another player. And by “help” I mean, you have to use their body to grab it without them really knowing it. Like, if you jump on another players head you will get a huge boost in height. When there is a Mario coin just out of reach, and all players are clamoring to jump on each other’s heads to reach it, it’s hilarious … and so much fun! 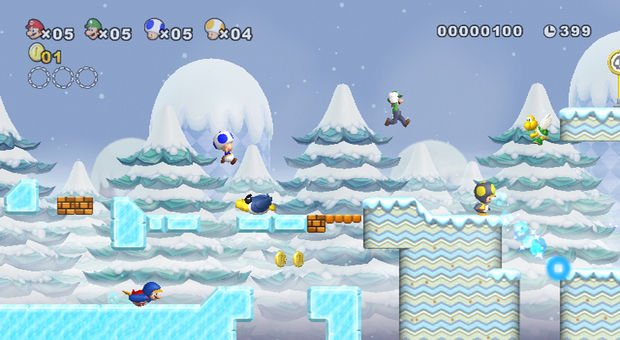 I could go on about all the little touches I adored about the game, but I will force myself to stop here (besides, finding this stuff out for yourself is part of the fun). I will mention that Yoshi is back, and you can eat fellow players and spit then into pits (amazing!). A bunch of new power-ups are going to be introduced, but only two were available to us: the propeller hat (jump extra high and float around!) and the penguin suit (slide on your belly to break blocks and look cute!). Oh, and the Koopalings are back. Um, yeah … awesome.

Based on my hands-on time with the game, I am giving my impressions of New Super Mario Bros. Wii a 9.5.*