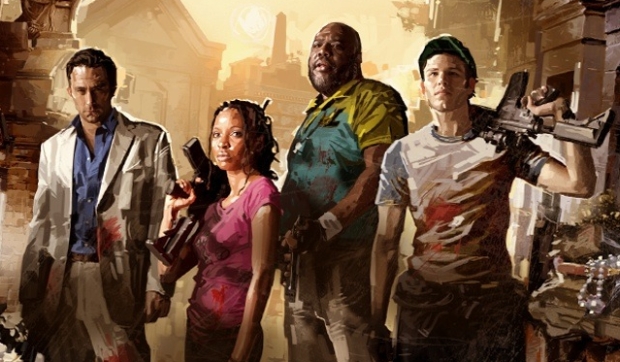 Bizarrely accurate predictions aside, I was surprised as anyone to hear Valve announce Left 4 Dead 2. I still play the original Left 4 Dead on a daily basis (under the assumption that more levels and game modes would be coming a la TF2), and Valve isn’t exactly known for their quick turnaround time. What the heck was going on?

I felt ambivalent about the prospect of a sequel. What more could they possibly add to make it feel like a totally new experience? I was sure it’d be fun if it shared anything in common with the original game, but what was so important that it couldn’t have just been added to the first game as DLC?

Today, I headed down to Valve’s private Left 4 Dead 2 room off the show floor to see what the big deal was.

Left 4 Dead 2 doesn’t really feel like a sequel, so much as an expansion pack or a modification: in my playthrough of the first two sections of “The Parish,” set during the day in the post-apocalyptic south, I honestly didn’t see enough new content to warrant Left 4 Dead 2‘s status as a true sequel.

The same firearms and grenades are back from the first game, although the guns have undergone a skin change. The shotgun is more of a white color rather than a dark grey, the uzi has a completely superfluous silencer attached to it, and the auto-shotgun looks like…a different auto-shotgun. The only new weapons we saw were the melee weapons, but I’ve gotta say — they’re awfully satisfying.

I got to play around with the frying pan and the axe, though one didn’t handle much differently than the other. These melee weapons are carried not as a backup that can be carried around without being used, but as a droppable item that holsters whatever guns you’re carrying (much like the propane and gas tanks found in the original game). Both the frying pan and the axe do devastating damage to normal infected. They don’t just kill in one hit, they also seem to have a very large attack radius. At one point, I ran up to one of my comrades who had been totally surrounded by the infected, and after a couple of swipes with my axe the entire crowd had been annihilated. The melee weapons have their downsides in that they’re useless against Boomers and Smokers, but they made me feel like a true badass once I found myself  squaring off against droves of the regular infected. They didn’t seem to break or wear down, either, which I’m still not sure how I feel about.

The graphics have been marginally updated, most obviously where gore is concerned. Zombies not only spray way more blood than before when shot, but parts of their body will actually degrade and blow off with every round, exposing shiny ribcages and intestines. You can now blow off arms without killing the actual zombie, and I saw more than a few armless infected angrily charging my teammates. It’s pretty gruesome, but the act of taking out regular infected is now way more satisfying.

Only one new type of special infected, known as the Charger, has been confirmed thus far. To be honest, he’s pretty boring — at least, from a survivor’s perspective. He can run and charge into the survivors, knocking them around, disorienting them and leaving them much more vulnerable to special infected attacks, but not doing a significant amount of damage with each charge. He can also grab individual survivors and begin pounding them into the ground face-first, only stopping when either the survivor or the Charger is dead. I ran into a good half dozen Chargers throughout the two levels, and they really just feel like Diet Tanks — everyone has to shoot him at once and keep their distance, and you’ll deplete his remarkably low amount of health pretty quickly. I get the feeling that this guy will be much more entertaining if you get to take control of him in versus mode; in Campaign, he’s really more of a minor annoyance than anything else.

Witches also wander around in daytime levels (which, by the way, are no more or less creepy than the night levels from the first game), rather than just sitting still and allowing the survivors to move around him. It’s kind of a neat change as it makes it much more likely that you’ll end up pissing her off, but we still easily took her out via the normal method (move away, torch her, everybody shoot her at the same time).

Incendiary bullets can now be picked up in special circumstances, and they’re exactly as satisfying as you’d assume. they are: with a single shotgun shell you can light up an entire crowd of infected. You’ve  gotta watch your ammo, though, as you typically only get eight or so incendiary rounds at one time. When they’re gone, they’re gone.

Perhaps the biggest change I found came at the end of the second section. You know how in something like the No Mercy campaign from the first game, you’d come across a door that would slowly open once activated, alerting a huge group of zombies and forcing your team to hunker down until the road was clear? Left 4 Dead 2 puts a slight twist on those moments by, essentially, not allowing you to just crowd into a corner and turtle up.

Near the end of the level, my team entered a large trailer with only two exits, one of which slammed shut behind us after we were all in. A pop-up message explained to us that the second we left the trailer, an alarm would begin to sound. An alarm that would never turn off. An alarm that would never stop spawning zombies. We had to get through the next area, full of narrow corridors and very sparse ammo stations, as fast as we possibly could. The safehouse awaited us at the gauntlet’s end.

These gauntlet sections are, without a doubt, the most satisfying and interesting improvement on the first game. The crescendo moments in the first game became woefully dull once players found good corners to camp in, and that sort of strategy is actively discouraged in these new gauntlet scenarios. You’ve really gotta keep moving and keep the pace up in order to make it through, and the tension is much more palpable than ever before. My team ended up dying, because I was playing with a couple of idiots who thought that it’d be cuter to stand in place and watch me get smokered to death rather than take two steps forward and hit the fucking right mouse button to free me, but I really quite enjoyed the gauntlet up to that point.

And yet, it still felt like I was playing a slightly tweaked version of the first game. I was hanging out with new characters, in a new environment, with a few new weapons and special infected and a new type of crescendo event, but…it still felt almost exactly like the first game, up until those last few moments. My strategies didn’t change significantly, nor did the emotions I felt while playing the game. I’m all for new maps and everything, but what little I saw at this E3 playthrough didn’t feel like enough to warrant Left 4 Dead 2‘s sequel status. I’ll be interested to see what other new things the game will offer in the coming months before its slated November release, but I just don’t feel all that thrilled for Left 4 Dead 2 just yet. It’s fun, exciting, and tense, sure — but it’s all of those things in almost the exact same way the first game was.