I often tell people that the original Dead Space was one of the most stressful games I have ever played. It probably sounds like an insult, but I mean it as the highest form of flattery: for a survival horror game to immerse me so totally that I not only experience fear but also stress while I play it is a tall order indeed. When I heard Dead Space would be coming to the Wii, my biggest concern is that the transition to an on-rails shooter would somehow lose that sense of tension in the shuffle.

I finally got hands on with Dead Space: Extraction yesterday, and while it is definitely different than the original Dead Space experience, it’s actually pretty good. I was also amazed at how much fun it is to take out a Necromorph with a Wiimote. Hit the jump and I’ll share my impressions with you.

As you may already know if you’ve been following the updates on it, Dead Space Extraction is a prequel to the original Dead Space showing off the events that lead up to Issac Clarke’s arrival on the Ishimura. There are four playable characters in Extraction, all who you will be able to play as at different points in the story. I did see a few cutscenes as I got started, but I’l be honest with you: I skipped them to get to the action. After all, you want to know what it’s like to play it, not a detailed retelling of the story, right? 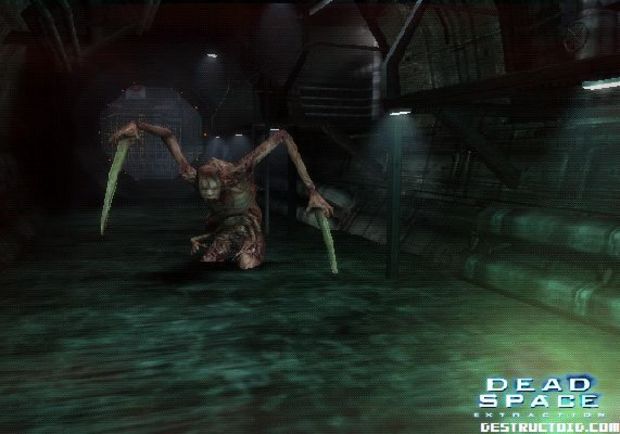 You can’t control where you move in Dead Space Extraction, as the game is on rails. Sometimes, that can be restricting, but in this game it honestly didn’t bother me at all. As I explored a part of the ship and watched some of the crew I was with argue among themselves, I came to a point where I saw two paths ahead of me on the floor (marked by the blue lines you may remember from the previous game) and I was able to choose a path. I found out later these forks often allow you to choose an easier or more difficult path through the game.

Even though I’m not big on the Wii control scheme, I found myself actually enjoying the way it was implemented in this particular title. You don’t have to worry too much about movement as the game does that for you, but the Wiimote acts as your gun, which you can aim straight on to fire or turn slightly to the side to use the second function. This control choice feels especially organic. On the other hand, shaking the Wiimote and nunchuk to get Necromorphs off me seemed an obvious use of the controls, but I enjoyed that a lot less. Not a waggle fan, I guess, but if you are this certainly won’t bother you. 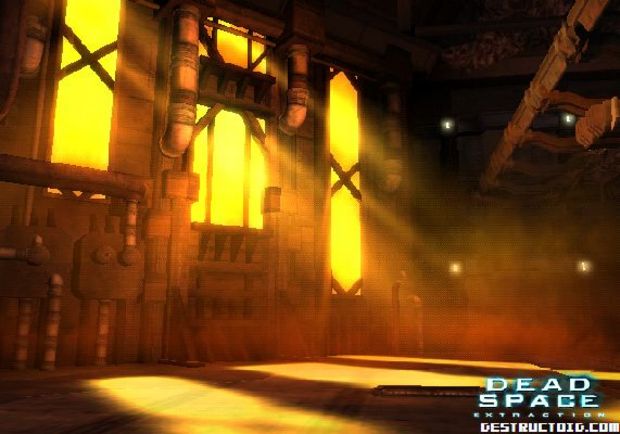 One of the biggest things I took away from Extraction was that targeting your enemies was vastly easier than in the previous game. This could be a good or a bad thing depending on the level of challenge you’re seeking, but I personally enjoyed it — I felt like I was actually able to dismember Necromorphs with more precision than before. You also have ten weapons to choose from, so the options are there: take em out as you like!

You can also shake the Wiimote to activate the light of a “glow worm”, which honestly wasn’t that much help and more of a distraction while fighting. You’ll also want to keep an eye out for boxes, crates with weapons within and health items. You need to be quick about scooping these up, because once you move past them there’s no way to go back and get what you missed.

Near the end of my play time, I stood at the opening of an elevator and defended myself from an oncoming wave of enemies while I worked on a puzzle minigame to bring the elevator back online. You use your Wiimote to drag a node from point A to point B, C and D while alternating between that and defending yourself. It certainly made the action more tense, but the game wasn’t overly involving and pretty fun to play. 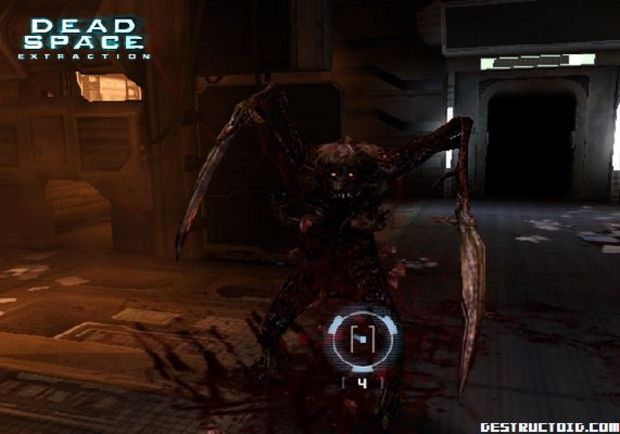 Comparing Extraction to the original Dead Space is the easiest way to overlook this game, which would be a shame: it’s a hell of a lot of fun to play, and while the Wii simply can’t provide the same level of graphical quality, Extraction does look really good running on it. This is also a very different game, and I found myself thinking of it as an opportunity for fans to dig more deeply into the story behind Dead Space. If you loved the first game, you really shouldn’t miss out on this one.