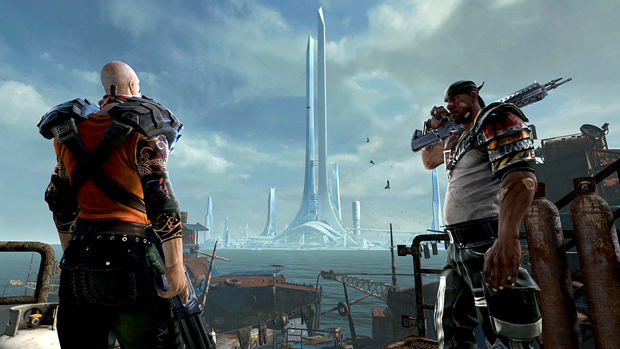 Surely I can’t be the only one who was utterly confused by the teaser trailer for Brink last week? The teaser was vague, made no sense out of context, and did exactly what it was set out to do … tease.

Thankfully, the wait wasn’t terribly long, and we now have actual information to share about the game. First off, Brink is a first-person shooter bound for Xbox 360, PlayStation 3, and PC in spring 2010. I know the FPS market is crowded as it is, but this one sounds very ambitious.

Taking place on a man-made city called the Ark, players will have their objectives, missions, inventory selection, and more dynamically generated to best match their current situation. The goal here is to make it so you always know what to do, and the game’s helpful nature is expanded upon with the “SMART button.”

When pressed, the game guesses what you’re attempting to do, and does it for you. The example given was trying to land a particularly tricky jump. Another unique aspect of Brink is its experience system, which lets you upgrade your persistent character as you gain points across single-player, multiplayer, and co-op; this is something I’ve been dreaming of seeing in shooters.

Stay tuned for impressions later this week from our team at E3.