That’s the first thing that the Guardian of Metal — voiced by one John Michael “Ozzy” Osbourne — says to roadie Eddie Riggs (Jack Black) when Riggs shows up in the Guardian’s lair, the Motorforge. The cave just happens to be the place in the heavy metal world of Brütal Legend where you go to upgrade or buy weapons, abilities, and your trusty steed transportation, The Deuce (or “Druid Plow”).

The game was playable on the E3 show floor, and I checked out the rather long demo so I could bring you good folks my impressions. The first part of the demo was the same thing that Nick saw two months ago, so hit up his preview to read about that. But if you’re interested in more, please do hit the jump. 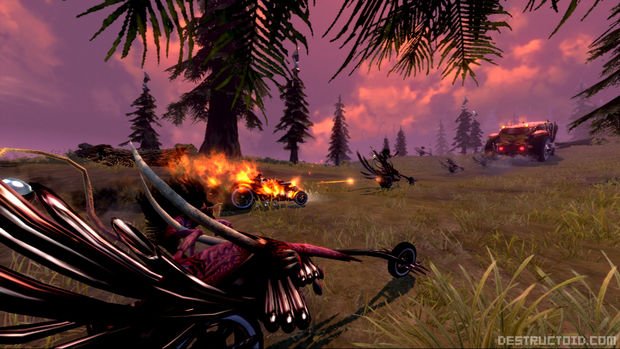 As I said, I played through the same section that Nick did, and the man at the EA booth explained that the next part of the demo would have me driving through the game’s open world. But there was a catch — first I had to take care of a boss that was blocking my way. It was a giant worm beast, but luckily, I had two assets: The Deuce, my bad-ass ride, and the beautiful-but-deadly Ophelia. She scampered away before the battle began, though — I had no idea where she went, but I had bigger problems anyway. As I drove around the space, the worm dashed in and tried to get me, but thanks to The Deuce’s boost (“Nitro”), I was able to evade the creature’s mouth.

I did a 180° and noticed that three appendages near its mouth had become stuck in the ground when it stabbed at me and missed. So I went up to one of them and hacked away with my axe, The Separator, and eventually it snapped, leaving the worm writhing in pain. After taking care of the other two, it became particularly enraged (understandably so), and that was when Ophelia called out to it. She was standing in front of a massive open gate, and she definitely got the thing’s attention; it rushed toward her and grabbed her. Of course, Riggs was none too happy about it. So after the cutscene ended, I noticed that the creature’s momentum had carried it under the gate. 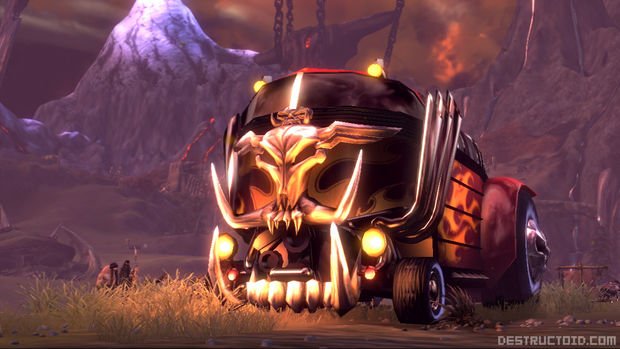 It was then that I saw the gate’s counterweights holding it up. I tried hitting them, but the EA booth guy suggested trying a special move. Pressing A and X unleashed the “Earthshaker” attack, and the gate came crashing down on the beast (while Riggs shouted, “Decapitation!”). Afterwards, Ophelia hopped back into the Druid Plow, and we headed out into the world. Of course, the art style of the entire world is inspired by (and contains) all kinds of heavy metal imagery, so there are things like giant swords sticking out of the ground everywhere. It’s great. And as soon as I drove out into the world, Mötley Crüe’s “Kickstart My Heart” began blaring from the car’s speakers. The game features a long list of songs — I looked at it in the pause menu, and with eight to ten songs available, it said that only 14% of them had been unlocked.

As for our next destination, the vehicle’s taillights lit the way (and there was also a “rock show” spotlight shining up into the blood red sky, somewhere off in the distance). That destination turned out to be the aforementioned Motorforge, the home of the Guardian of Metal. Sadly, I was forced to stop playing at that moment (I had to head off to another appointment), and even worse, the EA booth was too damn loud for me to hear most of what was going on in the cutscene. But I was told that the Guardian explains the game’s currency system: for doing particularly bad-ass things, you get “fire tributes” — imagine a fan at a concert holding up a lighter. 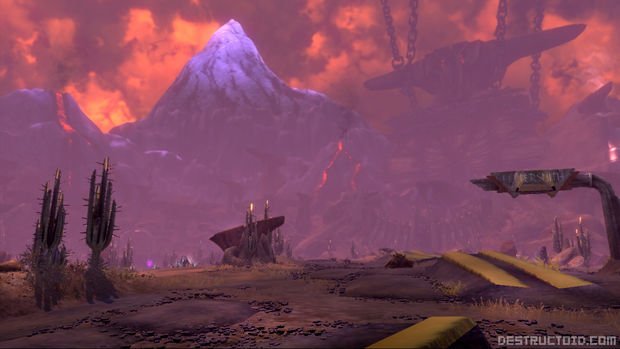 If Brütal Legend can mix up the gameplay enough to keep things fresh, I expect it to be a big hit when it launches on Rocktober 13th (assuming Activision’s dick move of a lawsuit doesn’t delay the game). It’s certainly got the trademark Tim Schafer humor, brought to life by awesome voice work from people like Jack Black, Ozzy Osbourne, Lita Ford, Lemmy Kilmister, and Rob Halford. I can’t wait.