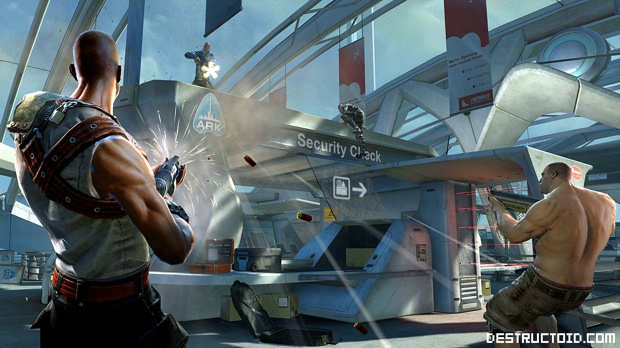 We clued you in the other day with information about Brink, the FPS heading to systems next year (PS3, 360, PC). What we learned when we saw the demo, though, is that looks freaking awesome.

The whole game takes place on floating island city called the Ark. While meant to be a utopian city, the Ark eventually lost contact with the rest of the world. After that, or during (?), refugees showed up on the Ark from other countries and upset the balance of the Ark populace, thus creating the two opposing sides in the game.

The mission we saw had you on the side the Ark military type folks as they were being sent into refugee territory. Even though you go in as a squad, you only play as yourself. But, there are these command posts throughout the level where you can do so many different things, it’s insane. You can change your class type on the fly, select mission objectives, choose experience building quests, and all sorts of crazy stuff and you do it all while the action is till going on around you. The level we saw barely even scratched the surface of things to do, but even what we did see certainly impressed.

The coolest thing ever, and you may have to see it in motion to really comprehend, is the terrain traversing mechanic that they call S.M.A.R.T. Just by holding a button and running, you can cross, climb, slide over anything in the levels. Imagine cruising through Mirror’s Edge at full speed with the “win” button turned on, then put a graphically gorgeous and complex FPS on top of that.

For example, the game engine can determine exactly where and what you want to do. Say you’re on the second level of a mall-like level and you want to be on the other in a quick minute. In any other FPS you would have to run around to the next place to cross over, or have to go downstairs and run across to another stairway to get there. In Brink, you just aim in the direction you want to go, hold the button to actuate the S.M.A.R.T. and just go. You’ll automatically jump over the railing, run across the first floor, jump on top of something, and then pull yourself up to the second floor again.

Anything can be overcome like this, and depending on the height of the reticule you can also determine the way in which your character will clear the distance. In one instance, the demo person had the character run and slide under some laser beams because the reticule was aimed low. He then turned around and ran at it again with the reticule aimed high, and the character jumped over the casing holding lasers. This mechanic makes it possible to make far more complex levels than most shooters have, and the level areas we saw really showed the difference that can make for gameplay.

Coming out in Spring, 2010, Brink already looks amazing in its current form, so we can only assume it may be even more impressive later. Again: Hotness.