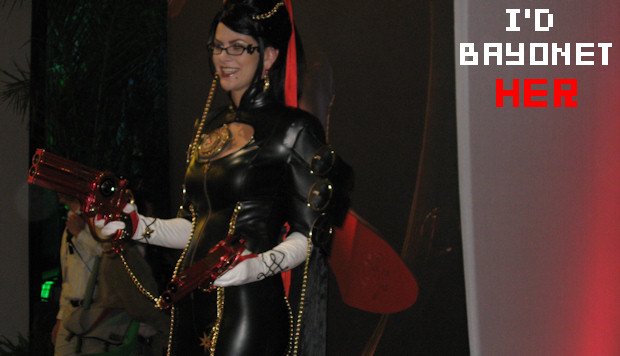 Yesterday, we were given a behind-curtains demonstration of Platinum Games’ incredibly sexy Bayonetta in action. My initial first impressions were very positive indeed, but after hearing that the game was playable on the showfloor, I had to get my hands on Bayonetta’s curves and take her out for a test drive.

It took three Sega reps to roll my tongue back into my mouth.

Bayonetta has been on my radar for over a year now, and I can see that the anticipation has been more than justified. If you love Devil May Cry, God of War, or games that are simply ludicrous, please hit the jump for our hands-on with what may well be the coolest IP Sega has acquired in years.

As we explained yesterday, Bayonetta‘s loading screen makes use of its time by allowing players to practice the titular character’s moves. Command prompts appear at the side of the screen and scroll to reveal more when attacks have been successfully performed. On the Xbox 360 version, A is to jump, X is to fire guns, B is to kick and Y is to pistol-whip. The moves can be combined to produce some powerful attacks. For example, Y, Y, B, Y will see Bayonetta summon up a deadly pillar of hair from the ground in front of her.

Yes, the hair. As you might already know by now, Bayonetta’s long hair wraps around her body and can create the appearance of her wearing clothes. The hair can be controlled and turned into powerful weapons and even devastating monsters. This conceit allows for the game’s most brilliant feature — the fact that Bayonetta becomes more naked with attacks that require her to use more hair. It’s gratuitous and shameless, but it’s also hilarious. Bayonetta herself is the sexiest videogame heroine I’ve seen in years too, which only adds to the brilliance of the whole setup.

The first stage I played was a boss fight against a fellow witch and showcases one of Bayonetta’s many talents, “Witch Walking.” When the moon is out, Bayonetta can walk along any surface by approaching it and pressing A. The enemy witch has access to the same ability and the battle takes place across the floor, walls and ceiling of the room. Combat is incredibly fast paced, and will feel instantly familiar to people who have played Devil May Cry.

Dodging is a simple case of pressing the left trigger, and when done just before an enemy attacks, “Witch Time” occurs. The game slows down for a very brief moment, allowing Bayonetta to get the jump on her opponent. I instigated Witch Time on a few occassions, but wasn’t able to react in time to do anything with it. It was also hard to tell when the boss would attack, due to the fact that combat is so fast.

Oh, and just in case you were wondering? The game provides the kind of stiff challenge you’d expect from a Japanese hardcore action game. While the sections I played were not insurmountable, they certainly tested me. Luckily, the D-Pad allows you to use mapped items, such as health potions. Be warned that you have to keep the button held down and wait for a delay before the item is used.

As well as the enemy witch, I also took on the opening level in which Bayonetta tackles some winged demonic minions. The enemy designs are fantastic and fighting a group of them can be very tough, especially if you’re not dodging. When defeated, enemies will leave their weapons behind, which Bayonetta can pick up. Her regular melee attacks will be replaced with new, weapon-specific ones. Swinging a ridiculously huge mace around is pretty epic.

As if all this nonsense wasn’t enough, Bayonetta can also punish enemies with context-sensitive button-mashing attacks. One particular example is approaching a downed enemy and repeatedly hammering Y in order to pistol-whip him in the head. The notorious “Torture Attacks” are also a huge deal of fun to perform. As Bayonetta attacks, she builds up With Points, and when full, she can initiate the Torture with a press of the B and Y button. She will then perform some gruesome moves, such as summoning an iron maiden and kicking her foe into it.

To close things off, I took on another boss, one whose design was so freaky and twisted, I couldn’t describe it properly to you. It had a kind of upside-down baby head though. Its weak spot was a red jewel on its back, and it was quite easy to take down by double-jumping behind it and hacking the hell out of the vulenerable area. The boss was ended with a magnificent Torture Attack that involved Bayonetta turning her hair into a gigantic slavering hound that snapped the boss into pieces while I hammered a button to build Gigaton power. The boss’ destruction was so utterly insane that the crowd watching me were laughing out loud.

Bayonetta is incredible. That’s the word I would use to sum up my experience with it. It’s challenging, it’s sexy, it’s a terrific laugh and it could well be my standout E3 moment. This is the kind of game that cold showers were invented for.