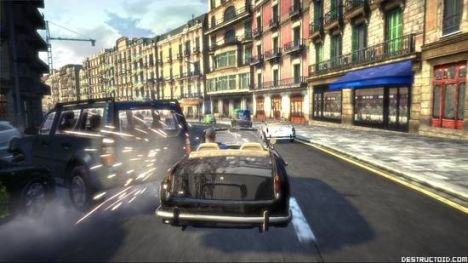 Wheelman is one of those upcoming games which might inspire a quick spark of recognition. A vague memory of a gameplay-devoid teaser trailer, or images of Vin Diesel’s shaven head may come to mind upon hearing its name. Developed by Tigon Games (Vin’s personal game studio) and released by Midway, I have to admit that I’d almost totally forgotten about it until I was given the chance to actually play it this morning.

Intended to essentially function as one big-ass cinematic, Hollywood-style chase scene stretched to the length of an entire game, Wheelman could best be described as Stranglehold meets Burnout meets GTA.

To find out whether or not this mishmash of different gameplay ended up being at all entertaining, hit the jump.

Wheelman is a sandbox auto-combat title taking place in Barcelona, Spain, but I hesitate to use the word “sandbox”: it conjures images of running around on foot, getting into huge gunfights and then running into a car and speeding away from the cops.  Unlike, say, Grand Theft Auto, Wheelman will overwhelmingly focus on chases, and replicating the feel of great car scenes from flicks like Ronin or The Bourne Identity. I was informed that on-foot gameplay would only comprise about 20% of the game’s running time, with car missions occupying the rest of the time.

The car gameplay itself feels like a racing game mixed with a brawler. The cars control pretty much as you’d expect (right trigger is gas, left trigger is brake), except where combat and “airjacking” come into play. By pressing left or right on the right analog stick at any time, the player can forcibly jerk their car to the left or the right without losing speed or changing direction. It’s basically a juke/bumping motion that comprises a lot of the car combat I witnessed.

Cop pulling up on your right side? Press the right analog stick in that direction and you’ll ram him from the side. If you time your rams right, or ram a car enough times, it’ll either crash into something or explode completely, sending its passengers flying out of the burning debris in a way which remained satisfying for the duration of my time with the game. Much of the car chase I played (which took place at the very beginning of the game, evidently) felt like a more tongue-in-cheek, somewhat old-school version of Burnout. The focus on ramming your enemies into stuff and boosting away was still there, but the actual combat mechanics felt more like actually throwing punches (if you can imagine the car as an extension of your fist, anyway) than just constantly sideramming cars into environmental hazards.

I was also shown  “airjacking,” a mechanic which reminded me a lot of Pursuit Force for the PSP. At any time, the player can hold B to lean out of the car, then target another car in front of them, and jump onto its roof, kick the driver out, and seamlessly take control of the vehicle. Allegedly, this mechanic was implemented to keep the pace of the chases up, and prevent the player from having to run around aimlessly looking for a new car after smashing theirs into a tree. With the ability to jump from one car to another at any time, with almost no effort on the player’s part other than holding B and choosing a target, I wondered: would this make the game too easy? I can’t know for sure, but I definitely understood what they meant about keeping the pace up. The producer jumped from car to car (I unfortunately didn’t get to play this part of the game) without pause and, as over-the-top as it looked, it seemed pretty damn fluid.

Also of note are the “cyclone,” a very Stranglehold-esque move where (in slow motion, of course), the player turns the car in a quick 180, aims out the windshield, and can shoot at specific areas of any cars which happen to be pursuing him. The player’s bullets are much more powerful when using this move, so I got to watch as the producer flipped around, shot a car’s engine twice, and blew the whole thing up before turning 180 degrees in the other direction and continuing the chase without losing any speed.

Overall, the game looked like a lot of goofy fun. It remains to be seen whether the car mechanics can remain entertaining and varied enough throughout the rest of the game (Stranglehold comes to mind once again), but Wheelman nonetheless has my attention.