For those that love strategy role-playing games, Sega’s upcoming title Valkyria Chronicles is a no-brainer. But, in the pictures and footage we’ve seen over the last year, it seems that there’s some appeal here for the non-SRPG fan as well. I couldn’t tell from my TGS Japanese-language hands-on last year, but my first English-language hands-on session at E3 with the title confirms some of that. There truly is a little bit of something for everyone in Valkyria Chronicles.

I managed to land an extensive play session, where I had the privilege of going through multiple stages of Chronicles.  After a guided walkthrough by Christopher at Sega to show me the in-game ropes, it took me all of…oh, two minutes to fall in love with this game.

Hit the jump for more on Valkyria Chronicles.

This title, the one that is not coming out for the PSP, looks absolutely beautiful in person. The watercolor, sketched look is thanks to the CANVAS graphics engine, and it does major justice to the “in the country” 1930s Europe setting of Chroncles. In person, it truly does look like moving art. Thankfully, they saved some of that creativity for the gameplay as well.

Forget hexagons and grids. Valkyria Chronicles’ BLiTZ battle system lets you individually control dozens of characters in your army, letting you command their next move from an overhead map. After this move, the game switches into a third-person view, letting you actually carry out your orders on foot.

Let’s say you’re a scout. When the game switches to full control, you’re given the opportunity to move your scout on foot. You’ll have to pay attention to the gauge that limits your range, but other than that, what you do is up to you. You can run and duck behind sandbags, or you can aim and take fire on an enemy. You’ll actually take control of the gun in first person, lining up the shot and then executing it.

As with other SRPGs, you’re granted a certain amount of “moves” per turn. You can opt to bring out another ally to provide cover, call over a medic, or even resupply your ammo. The difference here is that you’re doing all of this in real time, actually going through the motions. If you’re in a tank, you actually drive that tank to the location, aim, and then fire on the enemy. And your other characters can actually use that tank for cover later on! 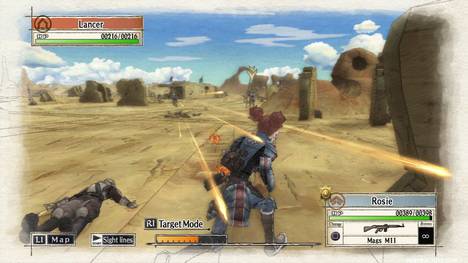 Aside from the typical stats like hit points and range, your characters also have individual traits to keep mind of. One character may be fond of others, and will fight better alongside them. Christopher at Sega pointed out that one character I was controlling loved nature, and when I was among the tress and grass, he was happy, and that made his defense stat increase.

Even with as much time as I spent with Valkyria Chronicles, I only got a small glimpse of the characters and their types. Each of the dozen or so I controlled were their own individual character, and not faceless clones. One female scout spoke in a valley girl accent. Hilarious! As far as character types, I played as scouts, troopers, snipers, and artillery persons. There’s also multipurpose engineers, which can do just about everything you’d need… except fight well. I even had the chance to play as Aika, who Sega geeks will remember from Skies of Arcadia.

Valkyria Chronicles looks beautiful and has really great gameplay to match. I don’t doubt that Sony is happy that this exclusive is coming down the line for them, as they’ve needed something like this, that would appeal to the role-playing gamer, for some time now. Tactical action may not be for everyone. But, so far, from what I’ve seen, I’d recommend this to just about anybody.

Valkyria Chronicles will be released this fall on PS3.