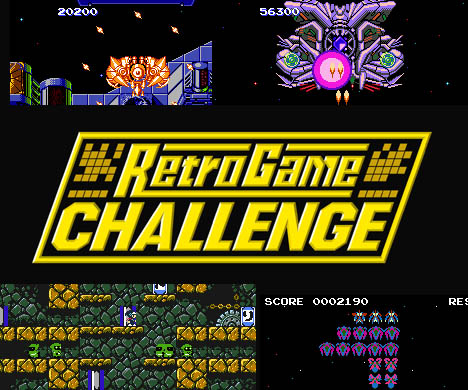 Retro Game Challenge is known in Japan as GameCenter CX, a Nintendo DS game based on the Japanese television show Retro Game Master. We were thrilled to hear that XSEED Games would be bringing this title over and would have a playable version at E3.

Players are transformed into a little boy and thrown back into the 1980s, back when the Famicom ruled the game scene.  You were sent back by Game Master Arino, who requires you to play and complete various retro games challenges to return to your own time.

Retro Game Challenge is made up of 8-bit one-offs of your favorite classic NES/Famicom games.  Racing, platforming, shooting, and even role playing make an appearance in this title, complete with retro graphics and music. The experience is rounded out with 1980s game magazines, full of news and game tips. I don’t know about you, but with all of this at my disposal, I’d rather stay in the 1980s!

Hit the jump to read more on Retro Game Challenge.

The 8-bit titles in Retro Game Challenge aren’t real Famicom games, but they get really close to some. I managed to play about half of them. One was a dead ringer for Ninja Gaiden, and another was a spot-on Galaga. I really liked the RC Pro AM rip-off called Rally King, and I got my ass handed to me in shooter Star Prince. These all looked and played like 8-bit classics, down to the die-retry nature of them.

At first, you’ll only be playing specific challenges in these fake titles. An XSEED rep said that once you complete these challenges, the full title will be unlocked for you to play at your leisure. He says that even a full Dragon Warrior style role-playing game is included.

The fake news stories included give tips and cheats for these games. But what you may not expect is the included history lesson they also give. The history of retro gaming, down to the game market crash in the 1980s, makes it way into Retro Game Challenge. Those that lived it can reflect back, and those that didn’t may learn a thing or two about their hobby.

My time with Retro Game Challenge was fun. I died often, but I did that in the 1980s as well. If anything, it shows that these games also emulate the unforgiving nature of the games of that time.

I’ll be looking forward to getting my faux-retro on this winter.