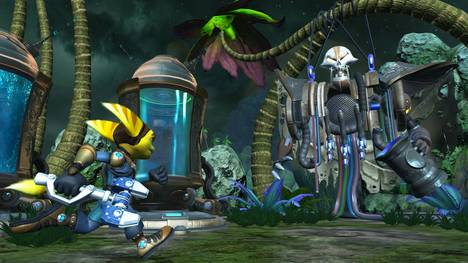 The Insomniac Games-developed title will offer up to four hours of brand new Ratchet and Clank Future-style gameplay as a standalone title that will not require the original title. Booty will feature an entirely new story that finds Ratchet washing up on the shores of a small village, and even teaming up with Ratchet and Clank Future‘s baddie, Rusty Pete. The game will feature new enemies, including the totally sweet sounding “Undead Robotic Pirates,” and will take Ratchet across four different locations (Planet Merdegraw: Pirate Fleet, Hoolefar Island, Morrow Caverns, and Darkwave Cover).

Insomniac are saying that the game will have a stronger focus on platforming and puzzles, with new wrench mechanics that will allow Ratchet to push, pull, and manipulate objects in the environment. With new areas and all new gameplay, it really looks like Insomniac are taking downloadable titles to another level, offering a quick Ratchet and Clank experience on par with a retail title for only $14.99.

The fact sheet says Ratchet and Clank Future: Quest for Booty will be available this fall, but Sony’s Jack Tretton told an entire crowd of people that the game will ship this summer. We’re excited, and we’re going to hold him to that.

Filed under... #E3#Ratchet and Clank