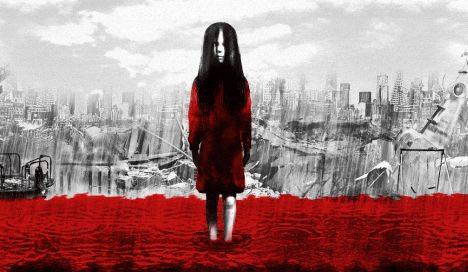 If you played and enjoyed FEAR, but were irritated at the PDA-driven story and repetitive office environments, then congratulations: you are officially qualified to annoy the community manager for Project Origin, the sequel to FEAR.

Of course, he was very gracious and kind when I asked him, in a not at all subtle or generous tone, whether the entire goddamned game would be taking place in office buildings once again, but one could sense a silent, almost invisible irritation. The moment after I spoke, I realized that (probably) nearly every single person who approached the Project Origin demo today had the exact same condescending-complaint-phrased-as-a-question, and took great relish in throwing it out to celebrate what they assumed to be their own immaculately critical eye.

After I mentally (but not verbally) apologized, I played the demo.

Project Origin starts a half-hour before the end of FEAR. You do not play as the Pointman, the mysterious superpowered protagonist from the first game, but rather as a totally different character altogether. While you witness the same events of FEAR’s epilogue from a different  (but spatially close) point of view than that of the Pointman, the Warner Bros guys on hand were sheepish about revealing whether your paths ever cross directly. They didn’t want to comment on whether or not you’ll ever actually meet the Pointman in Project Origin.

Which means, you probably do.

Anyway, my demo started off with a few of FEAR’s trademark scary hallucinations: a bloodshot eye foretold of a coming apocalypse (like they do), and, after exiting a trashed subway station, I suddenly witnessed a 747 plummeting to the ground overhead, its wings aflame. It was a startling thing to see considering how the previous game strayed away from ingame scripted sequences, instead unfortunately preferring to tell most of its story through optional PDAs and emails. It also reminded me of a scene from that crappy movie Pulse, which doesn’t really say anything about the game so much as my own propensity for watching horrible films.

I was told that the story will be much more integrated with the gameplay this time around (and if the scripted 747 sequence is any indication, it’ll be reasonably impressive), and that Alma would play an even more central role in the campaign – not just in her creepy child form, but also in her real-life teenaged form (glimpsed at the end of FEAR. Don’t you dare say spoilers or I’ll rip your larynx out and pee on it). I was explicitly told that “Alma will touch you.” Insert your own joke here.

The game looks good. It’s more colorful than its predecessor: the baddies have bits on their armor that glow various  color, which nicely differentiates them from the background. Had they been wearing the jetblack armor from FEAR, I probably never would have seen them.

Speaking of background, I spent the entirety of a demo running through a ruined city. I dunno how varied the rest of the game’s environments will be, but hey – there wasn’t a single cubicle to be found in my ten minutes of playtime.

As a fan of the first game, the combat felt pretty standard: the new protagonist can still use slow-mo and melee attacks, the enemies still convulse satisfyingly from every bullet impact, and you can still only hold a few weapons. I was admittedly pretty upset to find that you can no longer dual-wield pistols (by far my favorite weapon combo from FEAR), but the community manager attempted to assure me that the rest of the weapons would more than make up for the loss. Dunno if I buy that, though – I loved my akimbo pistols.

Things were pretty much status quo for the rest of the demo, which is in no way an insult considering how fun FEAR was: the shooting felt solid, the melee is still satisfying, and the giant robot mech controlled really well.

Yeah, sorry: there are robotic mech suits in the game.

They control pretty much the same as when you’re just on foot – the button layout doesn’t drastically change or anything – except you can take a crapload of damage, have two machine guns with infinite ammo (watch out, they overheat), and a missile launcher. I would liken the mech mechanics (the MECHanics?) to those of a game I recently played, but I don’t want to identify the name of said game for fear of spoiling it for people.

But if you’ve played the game, you know exactly what I’m talking about.

The mech was a total surprise to me for Project Origin, and a pleasant one: it broke up the gameplay nicely, and felt satisfying in its own right.

In the end, Project Origin looks even better than FEAR. None of the issues I had with the original were present in the demo, but time will tell if that holds true for the full game.