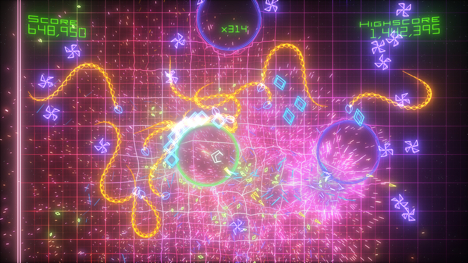 Those Microsoft guys really know how to put on a conference. The last XBLA post detailed what we know of Portal 2, Galaga Legions, and Uno Rush. If those titles weren’t awesome enough, XBLA has three additional cards up its sleeve. Geometry Wars 2, Banjo-Kazooie and South Park are all headed for the downloadable service this year as well.

The sequel to Geometry Wars, Geometry Wars 2: Retro Evolved, appears to be everything that a fan could want. Nothing was specifically mentioned about it at the conference, but the trailer is revealing. Geometry Wars 2 looks more frantic than its predecessor, especially when you factor in the four-player multiplayer shown in the footage. A couple of new enemies are making their way into the game as well, including a massive yellowish-green blob and little white sticks with flashing orbs on the end. There may even be other special attacks than just the bomb, because at one point the commentary of the game calls out for an attack called “Freeze.”

Microsoft’s new favorite first-party studio, Rare, will sort of be making its debut on XBLA. The title won’t be the rumored Goldeneye that we have all had our fingers crossed about, but it will be a highly regarded series nonetheless. The original Nintendo 64 smash-hit Banjo Kazooie is on its way to XBLA this holiday season. CVG had a chance to visit Microsoft and see the game first hand. Essentially it is a perfect port, complete with Nintendo logos. The weird part is that while it was originally a Rare developed product, another third-party developer is porting it entirely. The target is either before or with the release of Nuts N’ Bolts, which should make every Banjo fan happy.

Lastly, we have a Southpark game on the horizon. Nothing was shown except a small tease with Cartman sounding off, so it’s up to you to speculate. Check out the trailers for Geometry Wars 2 and Southpark after the break, and look down for some screens of Galaxy Wars 2.