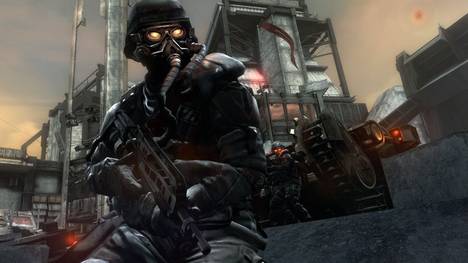 Question: Where was Killzone 2 during Sony’s Press Conference today? They showed footage of the game during the video montage of Sony games, but they really didn’t mention the game at all. You’d think they would want to hype up another one of their first party titles. Whatever, Sony. If you don’t want to hype up one of your own damn games, I guess I’ll do it for you.

Killzone 2 will follow the ISA forces as they try and defend themselves against the Helghan invasion. The ISA wants to put an end to the war for good so they’ve concocted a plan to go to the Helghan home world and capture the Emperor of Helghan. Will their plan work? Find out when the game drops February 2009.

Hit the jump to check out the latest trailer for the game as well as a guide to the new multiplayer Badge system for Killzone 2.

Rather than adhere to a rigid character class system, Killzone 2’s online mode allows the player to mix abilities from different roles to better suit his / her preferred style of play. Abilities are represented by badges: the primary badge defines the main role of the player character, as well as its outward appearance, while the secondary badge serves as a complementary ability that enhances the main role.

Although their player characters look different, both Helghast and ISA factions have the same set of roles and badges to choose from. Here they are, from left to right:

The default multiplayer character is assigned when no primary badge is selected. A secondary badge may still be added. Riflemen can start with most weapons, except for the specialized ones.

Sets up an automated turret which targets the enemy.

Throws a health pack, which can be picked up by other players.

Tags all on-screen enemy players with a hidden marker, which broadcasts their coordinates to team mates.

Throws a coloured smoke grenade, which serves as a spawn point.

Requests air support from a sentry bot which targets the enemy.

Assumes the disguise of a randomly selected enemy player.