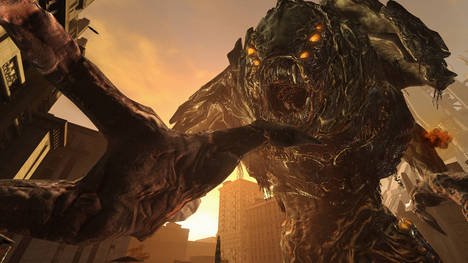 With giant monsters like these, it’s understandable why Sony forgot to mention Killzone 2 in their keynote!

At the Sony keynote earlier today, a new level from Resistance 2 was shown off. On this level, you encounter the Leviathan, a gigantic monster that’s too stupid to just knock over the building you’re hiding in. At the beginning of the fight, the Leviathan will grab you and throw you to a nearby building. From there, you will make your way across a make shift bridge that’s strong enough to take two hits from the beast. Eventually the Leviathan grabs you again and throws you a few blocks to another building. At this point, you have to lure the Leviathan towards a building filled with explosives to take out the creature.

This is why I never liked giant creatures much. The damn thing could easily plow right through the building you’re in at one point, but instead, it just stands there waiting for you to pop out.

Hit the jump to check out the Leviathan footage as well the president of Insomniac Games, Ted Price, talking about some of the back-story to Resistance 2.