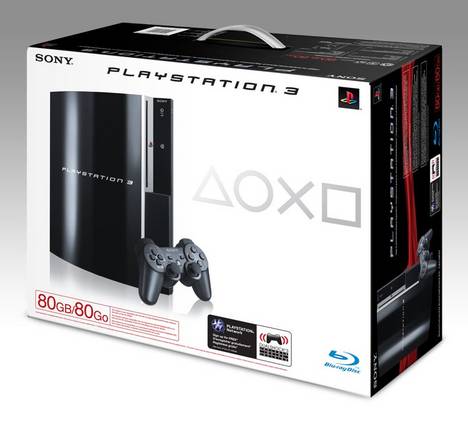 At their press conference earlier today, Sony unveiled the new 80GB PlayStation 3 “Core Pack”. This latest model will have the same features as the 40GB PS3s, but with double the harddrive space and will retail for $400, the same price that the 40GB models are right now.

The 40GB models are now on their last legs and will soon be taken off the market, joining the 20GB and 60GB in the console graveyard. It hasn’t really been made clear yet by Sony, but since the 80GB ” … will offer all of the features and functionality of the 40GB model”, then it looks you’ll have the same backwards compatibility issues. So you can play PS1 games, but no PS2 games.

What do you all think? Do you even care anymore about backwards compatibility?

LOS ANGELES, Calif., July 15, 2008 – Sony Computer Entertainment America (SCEA) held its annual press conference today at the E3 Media & Business Summit, making a series of announcements which demonstrated the strength of the PlayStation brand across all three of its platforms and further leveraged the heritage and momentum of PlayStation’s family of products to provide consumers with more compelling entertainment options than anyone in the videogame industry.
Starting in September 2008, the newly announced PLAYSTATION®3 (PS3™) 80GB model will become the mainstay of the company’s hardware line-up.  The 80GB model will retail for $399, and will offer all of the features and functionality of the 40GB model with double the storage to accommodate more movies, graphics, music, photos and other entertainment content – all for the same price.  As with its predecessor, the new 80GB model will be a complete entertainment system comprising of a Blu-ray™ player, HDMI output, an integrated Wi-Fi connection, Cell Broadband Engine™ and a built-in 80GB hard-disk drive. The multi-functionality of the 80GB PS3, combined with more than 140 exclusive and third-party titles and the PLAYSTATION®Network, is a comprehensive entertainment value designed to appeal to a wide range of consumers from hard-core gamers to general entertainment enthusiasts.