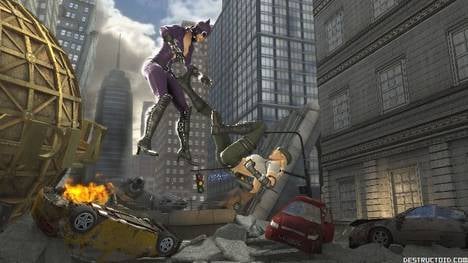 We’ve already heard the complaints about Mortal Kombat vs. DC Universe — how can DC super heroes like Superman go head-to-head with the likes of Sonya Blade or Sub-Zero? I mean, it’s Superman. Without kryptonite there’s no contest, right?

Well look: he’s apparently also vulnerable to magic, and with the number of mystic projectiles and resurrections found in the Mortal Kombat universe, they’re going to find a way to make it work. You didn’t hear anyone bitching when Capcom’s universe collided with Marvel, now did you? While they wouldn’t go into details, they’re promising that it will all make sense as told through the game’s narrative.

But regardless of how many random plot points they have to shoehorn into the game to make it work, all of it’s worthless without some solid gameplay. Because let’s face it — who’s playing Mortal Kombat for the story? I had a chance to get some first hands-on time with the game, and was pleasantly surprised at what I came away with.

Impressions and details after the jump. 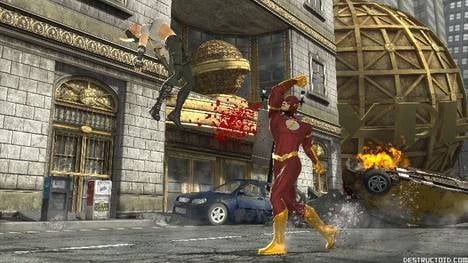 Admittedly, the Mortal Kombat has never been a particular deep or competitive fighting experience. But if anything, the MK team has consistently delivered decent — if not necessarily remarkable — titles since the series launched in the 90s. So my hopes for Mortal Kombat vs. DC Universe were check accordingly, and at the very least expected a solid but unremarkable experience. Surprisingly, I was wrong — MK vs DCU is shaping to be a lot of fun, and perhaps deeper than some would have expected.

The game was up and running on both PlayStation 3 and Xbox 360 units in Midway’s E3 booth. Six characters were playable: Sonya Blade, Scorpion, Sub-Zero, The Flash, Superman, and Batman. Dale North and I picked up the SIXAXIS controllers and without much help from Midway reps, dove right into the action; Dale chose Superman, I went with the more familiar Scorpion.

Moving the characters can be done in two ways: the d-pad will cause them to move left, right, and jump on a 2D plane; the left analog stick moves the characters about freely in 3D. The face buttons are pretty much what you’d expect from any Mortal Kombat game — two for kick, two for punch. Double tapping towards your opponent causes you to run, and one of the shoulder buttons is block.

With those basics under our belts, Dale and I went to town, easily stringing together brutal combos without much effort. Special moves are also typical and should be familiar for fans of fighters and Mortal Kombat in particular: back, back, and then square threw out Scorpion’s spear, as an example. Using the basics, Dale was thrashing me left and right; it was embarrassing. 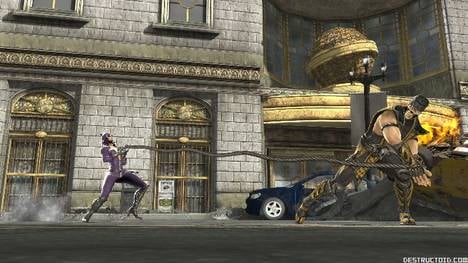 Then I discovered the game’s close combat, which helped turn the tides. By pressing R1 when close to an opponent, a close combat mini-game begins. The camera zooms in close to the fighters and by pressing various buttons, punches and other strikes would be unleashed. As with most Mortal Kombat games, the action is brutal, with punches landing with loud cracks and streaks of blood flying across the screen. The player on the defensive must anticipate their opponents button presses to evade; if the offensive player taps circle, for example, the defensive player would press circle to dodge.

Dale quickly caught on, and I noticed him looking down at my controller to see what buttons I would press next. My solution was to simply hide the controller from Dale during close combat encounters. That seemed to even things up a bit, but these encounters still seemed to rely mostly on guesswork and button mashing than anything else. Still, the encounters happen so quickly, but don’t take you out of the experience; in fact, if it does anything, it brings you closer.

Three environments were playable, including Hell, Metropolis, and a graveyard. Each had slightly interactive areas, like in Metropolis where you can pick up your opponent and quickly run him or her through a wall and into a building. During this sequence, players “test their might” by rapidly tapping a button to maximize (or minimize) damage. 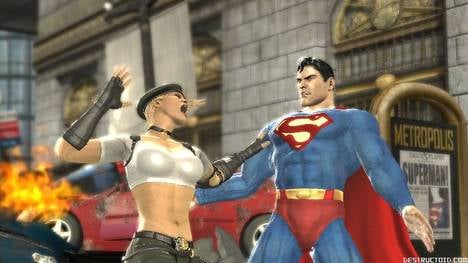 In the graveyard, it’s possible to toss an opponent through a wall and down to another area. Following them down, you’ll fight in the air, which plays out much like the close combat button-tapping anticipation game. As the defensive player pummels their opponent, a super meter is build up; when the meter hits a certain point, the player can tap a button to unleash a devastating attack that quickly ends the falling sequence. The super can be built up higher for more devastation at a risk — there’s always a chance of it being reversed, and the super move being stolen.

Visually, MK vs. DCU is looking pretty good running smoothly on the Xbox 360 and the PS3 using the Unreal Engine 3. The DC character designs have been tweaked to fit in with MK universe and not the other way around; characters look more “realistic,” and not necessarily ripped directly from a comic book. Characters take damage over the course of the fight as well, with bruising and clothes tearing as the battles progress.

Also, important to note. Unlike has been previously reported, MK vs. DCU does indeed have finishing moves. DC heroes will have “Brutality” moves, like one we saw in which Superman hammered and pounded his opponent into the ground. Mortal Kombat characters and DC villains will have more traditional fatalities, like when Scorpion pulls his mask back and chars his enemy with fire. While you won’t be seeing any heads rolling or limbs being ripped off, Midway are promising to push the expected T rating as far as they can.

Mortal Kombat vs. DC Universe is expected to ship with ten characters from the Mortal Kombat universe and ten DC characters, and will be available this Fall.