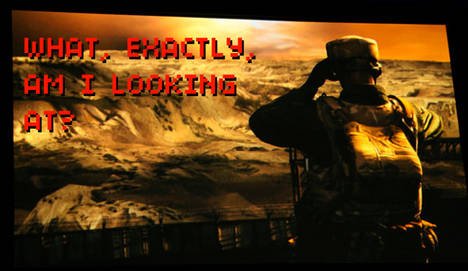 The trailer for a new, modern combat shooter, Massive Action Game, debuted at Sony’s event today. There’s a lot of guys running around, blowing stuff up and shooting one another. Apart from that, we get the title, a flowchart that shows a chain of command and a maximum player count broken down into squads of eight.

It really isn’t a lot to go on. The chain of command first made me think this was some sort of tactical affair, where higher-ranked players would plan out strategies to be executed by ground-pounding players in the squads. If that’s the case, this might be the most ambitious online wargame ever attempted.

Of course, there are obvious problems that could arise from having 256 players connected to one game. Not to mention getting even half that many to all agree to cooperate towards a single goal. Still, if Massive Action Game is going to be more involved than our standard shooter fare, I’m interested in seeing exactly what that might be.

Follow the jump to watch the trailer and give me your thoughts on it.