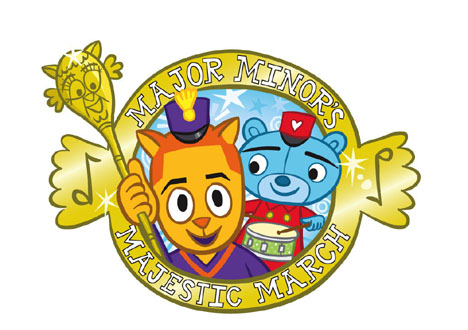 I know what you might be thinking: A marching game for the Wii? Don’t tell me – the Wii Remote is the baton, right? Kill me now!

Normally my reaction would be about the same. Major Minor’s Majestic March marches to its own beat, though. It’s not some poorly-made Wii crapware. This title comes from the creative team of Masaya Matsuura and Rodney Alan Greenblat, the guys who made PaRappa the Rapper. It’s polished and creative, and there’s nothing else out there quite like it. Oh, and it’s a lot of fun to play, too.

You play as a bandleader, and your job is to march with your baton (Wii Remote), in perfect tempo to recruit other band members along the way. If your marching is good, you’ll have a massive band parading behind you down the street. If you suck, you’ll be marching alone. Simple, right?

Hit the jump to see a video my boss making obscene hand gestures while wearing a smoking jacket and smoking a cigar.

The gameplay is deceptively simple. You keep tempo to typical marching band music by simply raising and dropping the Wii Remote in time with the music. It’s not as easy as it sounds, though. You can’t simply wave the Wii Remote around. You have to hold it upright, and snap to the correct beats. When you encounter another potential performer on the street, a well-timed tip of the baton in their direction magically recruits them into your band. If done right, you’ll end up with a massive band behind you. If you can’t expand your band, you’ll look lame marching down the street by yourself.

A Majesco rep played Majestic March for me to show me the ropes. He made it look so simple. But when I watched others play, it was apparent that his time with the title made him that much better. After watching a few others fail, I tried. It took me a few tries in a tutorial mode to get the up and down motion correct, and a couple more to get the baton recruiting moves right.

When I finally did get it down, Major Minor’s Majestic March was a blast to play. I managed to build a nice sized band quickly, and somehow it really felt like I was leading players down the street. There’s a kind of pressure you feel to keep things going perfectly that makes things fun. One false move, and your band is gone! I found that you could increase or decrease your tempo with baton movements by gradually increasing or decreasing your Wii Remote movement speed. But the trick is doing it in perfect time. When I was done, the rep was quick to show me up, marching at about twice my speed, adding in a fancy baton twirling move to put me in my place.

Rodney Greenblat’s artwork is the icing on the cake. At first glace, it may look a little young. It’s the colors that give it that kindergarten look. If you look past that, the design is truly crazy. As expected, the game is made up of musically inclined animals and talking flowers. I think I saw a xylophone playing cactus at one point. All of these characters and their environment are very brightly colored, and the level design is out of this world. I remember marching down a dock into the ocean, with band in tow.

If you can get past the slightly perverted-looking hand motions this game requires, you’ll find a lot of fun in Major Minor’s Majestic March.  Its design and gameplay are fresh and fun, and the level of interactivity should be an example to other Wii developers. It’s totally worth the upper arm ache.

Keep an ear out for Major Minor’s Majestic March this holiday season.