This fall, developer Traveler’s Tales will be merging their popular cooperative LEGO videogame titles with DC Comics’ Batman universe in the form of LEGO Batman: The Videogame. Publisher Warner Bros. Interactive and Traveler’s Tales had a playable demo of the game as part of their games showcase at E3 this year, and I came away more impressed than I had expected I would be.

Now don’t get me wrong — Traveler’s Tales LEGO Star Wars games were cute fun, but not particularly deep in their execution. By the time LEGO Indiana Jones hit the market, the voices in my head couldn’t help but think “Here it comes again.” So while I’m admittedly a bigger fan of the Batman universe than either the Lucas or Speilberg properties, I couldn’t quite bring myself to be excited about the idea of a LEGO Batman title.

The Xbox 360 demo I spent some time with changed all of that, proving that Traveler’s Tales have taken the time to make significant improvements to both the game’s visuals as well as providing a number of cool new play mechanics that should keep the game fresh for the promised 19 plus hours of gameplay.

LEGO Batman will not only feature LEGO-ized versions of Batman and his sidekick Robin, but a full roster of villains as well, including The Joker, Mr. Freeze, The Riddler, and more. The game will feature two separate story modes as well, each featuring 15 distinct levels. One story mode will give players control of the heroes, with the other putting them in the nasty-pants of various villains. Each will follow their own story arcs, but unless you murder Robin and cripple Batman at the end of the villians’ storyline, I’d imagine you’re fighting a losing battle.

Traveler’s Tales were only demoing the hero side, and I took on the role of the caped crusader alongside another journalist who controlled Robin. In this early level we prowled the rooftops of Gotham City in pursuit of the slippery Catwoman, taking out thugs and various other baddies along the way. Immediately noticeable was the amount of work and detail put into the game’s visuals; despite the simple design of the LEGO characters themselves, the environment had a sharp, impressive next-gen look, with impressive lighting and textures.

When I was at a distance from my partner, the camera would pan out, giving us a view of the gorgeous city skyline, the moon casting a subtle glow across the rooftops. Little touches like a flurry of bats rising up from an alley really brought the world to life. 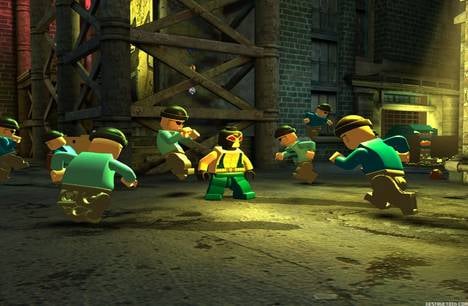 Outside of visuals, gameplay has been given some interesting upgrades as well. The simple button mashing combo action of previous LEGO games is still here, with the hand-to-hand combat consisting entirely of a single button press. Holding down the attack button will also make a bat logo reticule appear on the screen, which when released makes Batman or Robin toss the iconic a Batarang.

But the real fun came in the form of different suits which the heroes can swap out at designated areas. Each hero has five suits, including their original costumes. Batman can don Glide, Demolition, and Sonic suits; Robin has access to Magnetic, Technology, and Dive suits.

During our demo, Robin was required to his Magnetic suit which allowed him to walk up a metal wall in order to build a ladder that Batman could access. In another area,I swapped out to Batman’s Glide suit to float across a rooftop, and used Batman’s demolition suit to plant and then detonate explosives. Robin’s Technology suit was particularly cool, giving him control over a radio controlled car to access some switches. 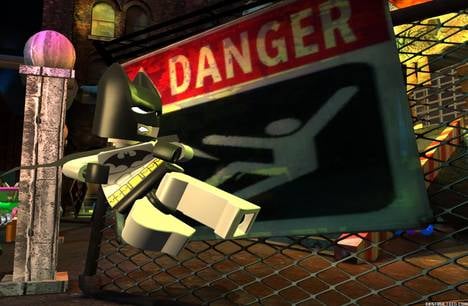 With the inclusion of the new suits and powers, the gameplay was fun and varied in our short demo. There were some light platforming elements, which included some hopping and rope climbing in certain areas. Especially cool was the Batcopter, which my co-op partner flew as I swung freely from a robe below, taking out enemies as best I could.

A bit disappointing to hear was that LEGO Batman will not feature cooperative online play, supporting local multiplayer only. Still, with somewhere close to 19 hours, a freeplay mode where you can use any of the game’s unlocked characters in any level, and dozens of collectibles and unlockable bonus content, there looks to be plenty of value included in LEGO Batman.