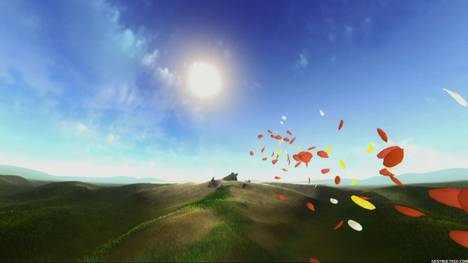 Talk about a palette clenser after playing 30 or more minutes of Killzone 2. Sony are classiying thatgamecompany’s upcoming PlayStation Network title Flower in the “Zen Gaming” genre, which could also be applied to the developer’s last title, flOw.

It may seem like a silly marketing tag, but it’s surely appropriate — Flower is more of a decompressing and relaxing experience than it is an actual game. The goal of the title is to enter and restore beauty to dream worlds, acting as the wind to sweep up flowers and petals that cause different reactions in the environment.

By tilting the SIXAXIS left and right, I was able to control “the wind,” targeting blooming flowers in otherwise dead fields of grass. Sweeping over yellow flowers would cause red flowers to bloom, and I’d have to tilt the controller around to touch them in order to cause the grass to bloom and have that area come to life.

Each flower I touched had a slightly different effect on the environment and was also attached to a different musical sound. By sweeping areas, not only would I bring the world to life, but I’d also caused the relaxing music to swell. In a smart move, Sony had headphones attached to the demo unit, and I was able to hear the subtle sounds of the wind and rustling of thousands of blades of grass as I swooped by.

The “dream” sequence was complete when I restored beauty to the entire area, in effect making “the flower” happy. While one of the game’s producers tried to explain that the dreams were puzzles of some sort, this first dream was fairly linear and required little to no thought. As a “game,” I’m not sure how successful Flower really will be (an argument that still plagues thatgamecompany’s other title, flOw); but as a “zen” experience, I don’t think there’s anything else like it on the PS3.

As part of our E3 coverage, be sure to check out Sony’s E3 trailer of Flower.