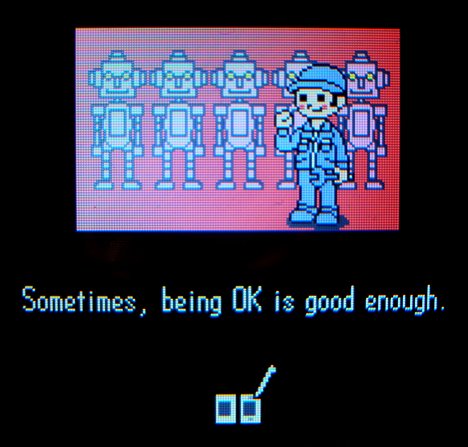 Tucked beneath the ruckus regurgitating out of the WiiMusic stands, Rhythm Heaven, the sequel to Rhythm Tengoku, sat quietly on its own amidst the other DS games by Nintendo. I had plenty of time to try out all three mini games featured at the show, and after a session of ten or so minutes it had completely won me over with its offbeat style and catchy beats. Hit the jump for some hands-on impressions of the game that, in my opinion, is the best thing Nintendo has to offer this year at E3.

Rhthym Heaven basically uses the same format as Rhythm Tengoku but is enhanced by the use of the stylus and the touch-screen for a wider range of interactivity. Players hold their DS sideways like a book and use very simple actions of flicking or pointing the stylus on the touch-screen to complete the various tasks. I had a range of three different challenges to take my pick of, all of which you can find descriptions of below.

Robot Factory
In this exercise you’re working in a robot factory and your task is to perfectly fill each robot with oil at the right time in the music. By pressing the stylus to the touch screen, you move down the oil nozzle to the approximate location of the robot head. Keeping the stylus pressed keeps the nozzle down and fills the robot with oil if timed correctly. Robots start at the right side of the screen and are pieced together one by one to the rhythm, but once they’re finished you’ll have to time it right to fill them with oil when they’re conveyered away to the left. As the level goes on, the rhythm gets faster and it’s easier to accidentally not fill the robots up completely, or fill them up with too much oil and make them explode. But if you orchestrate your moves correctly, robots will light up and happily strut away. This level had me shaking my bum to the beat, and was probably my favorite of the three.

Chorus
In this challenge you’re a singer in a three person chorus and you can’t keep your mouth shut. As the training tutorial explains you need to “Tap to close your yap!”, otherwise you’ll embarrass the rest of the chorus with your constant wide-mouthed wailing. Lifting your stylus only when you want to sing, you have to listen to the music and pay attention to the singing patterns of the other singers in order to be successful. It was a little tricky figuring out when to sing, but I even when I messed up I was delighted by the sour faces of my singing partners.

Assembly Line
The last challenge is a bit tricky to explain. Your task is to shoot pins to connect two moving square pieces with a hole in the middle at the correct time. Once the music starts to play, the square pieces come out from either side and start making music, do-re-mi-fa… and so on as they roll. On ‘So’, you have to flick your stylus quickly across the screen to shoot the pin when the squares overlap each other. If you miss them, the squares will fall away and you’ll lose points. This challenge came close to the pleasure I got from Robot Factory, but the music was really quirky and the flicking made the gameplay a little more action packed.

So, I love this game. In fact, I think I’d be totally and entirely satisfied to yoink this game from its stand, huddle over in a dark corner in the showroom, and play my little heart out for the rest of the show. In comparison to Nintendo’s other offerings this year, Rhythm Heaven gives a music experience that’s unique and delightful to boot, the game strongly influenced by a quirky Japanese art style. Be sure not to miss this one when it comes out!