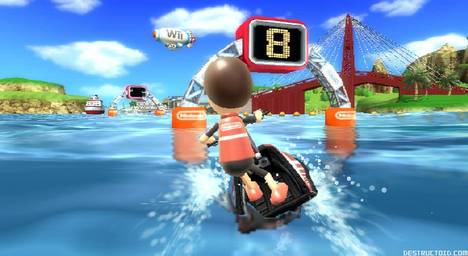 You know how Nintendo are making a lot of money sellings the Wii, sometimes based only on the desire to play WiiSports? Well, Nintendo are about the make a hell of a lot more of it next year when they unleash the fury of a WiiSports sequel, WiiSports: Resort, bundled with their new Wii MotionPlus accessory.

Officially revealed last Monday prior to Nintendo’s E3 press conference, the Wii MotionPlus controller adds functionality to the Wii remote functionality that should have been there from the start. I’m talking about 1:1 motion controls for a more accurate and realistic motion control experience.

I spent some time with three of the “mini-games” that will ship as part of the WiiSports: Resort package — Power Cruising, Disc Dog, and Sword Play — and boy are my arms tired. Hit the jump for details and impressions. 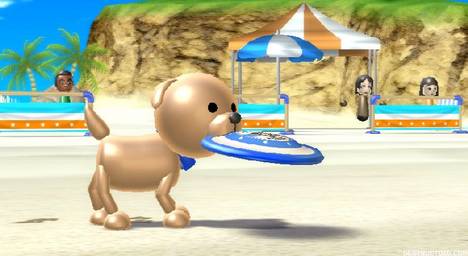 My first experience with the MotionPlus was with Disc Dog, a simple frisbee tossing game included in Resort. The premise is simple: your Mii avatar tosses a frisbee and a dog (which you might recognize from the WiiFit jogging game) attempts to catch it. A successful and accurate toss nets you points, a sloppy toss results in a sad puppy.

After grabbing the frisbee from the dog by pressing “A,” I immediately noticed the difference the MotionPlus made. If I turned my wrist slightly, my on-screen avatar did the same. Even the slightest movement of my arm in 3D space was represented on-screen. Tossing the frisbee required no button presses, simply a flick of the wrist. My first toss was sloppy, veering off to the right, and the dog didn’t even come close. The game offered up some hints, like telling me to keep my wrist straight, and after a few tosses I got better, but not great.

But the fact that I couldn’t toss the disc worth a damn says a lot — that’s how I am when tossing a frisbee in real life. The physics of the disc felt right, and when I threw the disc wonky, I knew it was my own damned fault. At one point, I tossed the disc straight up in the air, directly above me … just because I could. The dog, not surprisingly, did not catch it.

The second game, Sword Play, is what gamers have been crying for — one to one sword fighting on the Wii. To begin, you point the Wii remote at the screen to calibrate your center. Once calibrated, I started to swing and it works as advertised. The game’s training mode had me slicing a giant pencil up with the sword; I was able to slice horizontally and vertically, accurate enough to slice off the very tip of the pencil without problem. Holding the “B” button will put you in a block stance, which can be manipulated with with the Wii remote and MotionPlus. 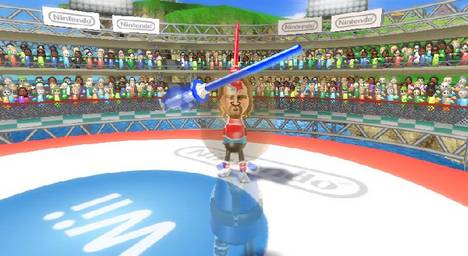 The actual “game” portion of the sword fighting was a tiring affair. I went head-to-head against a computer controlled opponent and tried to play it defensively, only swinging when I saw an opening. I was quickly knocked off the platform, which resulted in a quick loss. The second round I took a different approach: I violently whacked at my opponent, knocking him back until he tumbled off an edge. The third round I used the same tactic, only this time the A.I. played more defensively and time ran out, resulting in a sudden death that took place on a smaller, raised platform.

Like boxing in WiiSports, the hectic, wild flailing tired me out in no time flat. By the end of the third round, my arms were devastated. Granted, this might have something to do with the three hours of sleep I got the night before (and the fact that I’m dreadfully out of shape), but I’d say “Sword Play” is going to be a hell of a workout.

Finally, I had the chance to test out Power Cruising, WiiSports: Resort‘s water scooter game that Reggie Fils-Aime (Nintendo of America’s President and CEO) demonstrated at Nintendo’s press conference. By holding the Wii remote and nunchuck horizontally like handlebars and pressing the A button, I was able to shift left and right to turn, and pull back or lean forward to ride on small waves. Twisting my right wrist caused the water scooter to get a slight boost. The motion was good and responsive, and I felt like one of the actors in Wii marketing, really getting into the turns with my entire body. 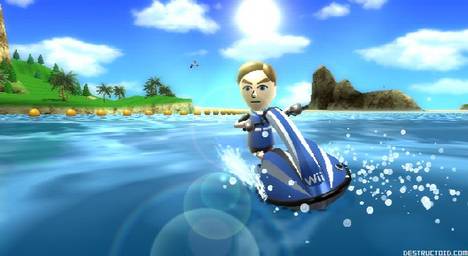 The goal was relatively simple, having only to pass through ordered gates. When I asked Nintendo reps whether or not there would be more variety added to Power Cruising, I was told that it was unclear how much more fleshed out these particular games would be (there will be at least ten total), and that they just wanted to give gamers (and developers) some ideas of how MotionPlus could work in games.

In fact, Nintendo claims that the announcement of the controller was a surprise to many developers. While I can imagine that many are going to want to get on board with the new tech, I wonder how long it’ll take for any one developer to make a worthy title that taps into the true potential of what the MotionPlus can offer. 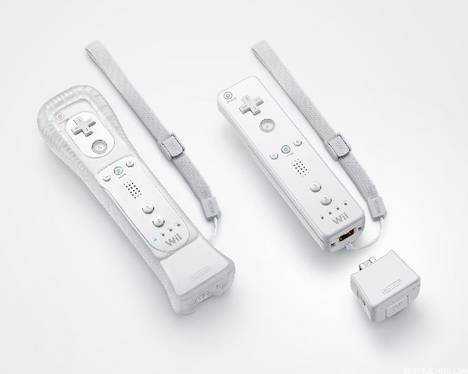 Additionally, I posed a question that Nintendo PR reps claim no one else had asked: since the motion plus snaps into the bottom of the Wii remote (the nunchuck attaches via a pass-through port), how would one fit that into the already established Wii Zapper? The answer: you couldn’t. In fact, they claim that they hadn’t even thought of it. The solution, they suggested, might be that a developer would have to choose between supporting the Wii Zapper or the MotionPlus. I suppose we can’t expect to have our cake and eat it to, but I wouldn’t be surprised if we saw a redesigned Wii Zapper introduced that renders the old one obsolete.

The MotionPlus, like I already mentioned when talking about Resort‘s Sword Play game, works as advertised. People have been wanting this tech since day one; It’s unfortunate this technology wasn’t included right out of the box with the introduction of the Wii. The word I got from third-party developers mirrored that thinking, but many are excited to finally have the chance to implement it in their games.

With no price announced price, the Wii MotionPlus and WiiSports: Resort Bundle will ship in Spring of 2009.