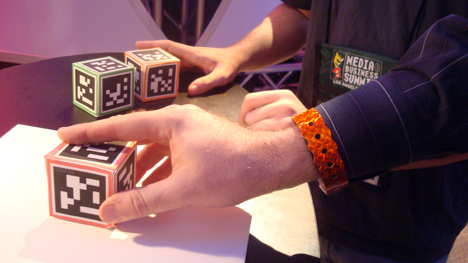 While taking my first quick walkabout the showroom floor, I was passing the IndieCade section and happened upon a curious display of three colored cubes sitting in front of a webcam. Approaching the game with no instruction, I picked up the red block, each of its sides mapped with a different barcode, and aimed one of the sides to the camera. To my absolute delight and surprise, the monitor above the display suddenly revealed a tiny 3-D room in the box with delicate little stairs, doors, and windows. I didn’t know what I was handling at the time, but I was instantly hooked.

While there were only three boxes/levels to tinker with, levelHead certainly made a thrilling impression on me at E3. Hit the jump to get a video demonstration on how the game works and my overall impressions of the game.

Spanish artist Julian Oliver’s stunning spatial memory game levelHead is a delight to play around with, each colored block a different level of difficulty. By aiming the first side of the red starter cube to the webcam, you see a white silhouette of a man standing at the top of some stairs. By tilting the cube to an angle, you can move the figure around and through the other doorway, into the next side of the cube. Once the figure makes it through all rooms of the cube, you move onto the next colored cube, the final orange cube being the hardest of them all. Take a look at the video demonstration to get the gist of it.

While the game may seem simple in execution, the tactical experience between rotating the cubes and observing the reactions that followed on screen was really unlike any other experience I’ve ever had. Part of the novelty was certainly manifested in the flux of scale between the tiny cube you held in your hand and the immersive space that was revealed on the display, but my curiosity never settled as I moved my figure from room to room. I had a very real, almost God-like influence on the tiny world in my hand, and in this respect the game veered closer towards an interactive piece that artfully explores gameplay interactions, and a wonderful piece at that.

Hypothetically, since the game only requires a webcam and barcodes to register the image, anyone with the ability to print out the codes and assemble the cubes can play the game. Oliver’s site notes that levelHead will be released as an open-source project on July 30th. Do you think you’ll be downloading it and trying it out for yourself once it becomes available?