I like the Cooking Mama series. It’s fun, easy to play, and best of all, easy to pick up and put down at any moment. I’m going to be honest though: I reviewed both DS incarnations, and as much as I liked them, I felt like I wouldn’t buy the next one unless something about the formula was majorly changed. It wasn’t that I didn’t like the games, but you can only take so much of one thing before you’ve had enough (except kittens and boobs, that is).

Hit the jump to hear my thoughts about Cooking Mama World Kitchen.

I really like cooking games a lot. I don’t know if I just like the life simulation aspect or some deep part of my genetic coding is trying to draw me back into the kitchen, but I have fun playing them. At a glance, I could already tell that Cooking Mama World Kitchen could be a lot of fun for a gamer looking for a lighthearted, casual experience. With that in mind, I grabbed a Wiimote and dived in headfirst.

The first thing you are going to notice (aside from the new 3D look, which is well done and looks adorable) is that you are not playing as Mama in this game. Instead, you play as a young boy who could easily be mistaken for a young girl, with Mama as your coach. I wasn’t sure if I would like this, but after seeing the way Mama is utilized to help you out, I actually walked away feeling I liked it better than playing as Mama (I’ll get into why later in this review). 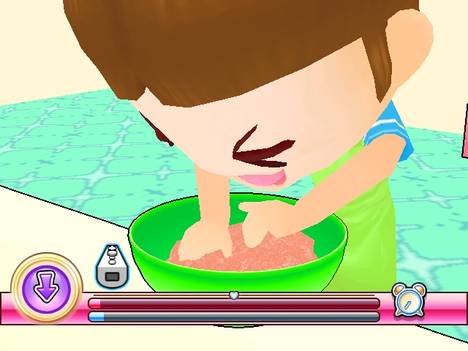 Of course, it wouldn’t be a Wii game without motion control, and the Wiimote is in full effect here, acting as your utensil as you chop, whip and dice your way through new recipes such as potato salad and ginger pork. My personal take here is that it is fun, but you have to be in the mood to swing your arms all over the place to play it (and that goes for any game that makes you use the Wiimote in this way). If you enjoy that, this game will be a lot of fun for you, but if you hate it, steer clear.

One of the new elements that have been added are mini-games where Mama attempts to “save” something that you have screwed up. For example, if you flip a burger too hard and it flies out of the pan, a dog will run in and try to grab it for himself. Mama can intercept by leaping across the screen and catching it with her pan, but you have to get the timing just right. It’s worth it to fail a few of these just to see the results — they definitely add new humor to the game that makes it even cuter than it already is. You can also view these scenes in an album after unlocking them. 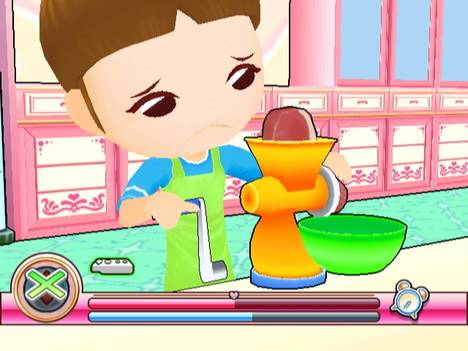 Unlike the DS titles from the past, making recipes takes longer than it used to. It changes the pacing, but I didn’t find it unpleasant at all. My only complaint about the title is that co-op play is only available locally. It’s not a shock, but I think it would have been fun to play this with friends online.

Of course, the question still remains: would I buy it? At $49.99, it’s probably a little steep for a casual title for me to snag right away, but I might pick up a used copy later down the line.The game does have a lot to offer, and for fans who thought the previous titles were cute and fun but felt the format could eventually get stale, Cooking Mama World Kitchen ought to offer up enough new twists on gameplay to keep you satisfied. Keep an eye out for it this holiday.