As I was watching Colette and Dale play Square-Enix’s Infinite Undiscovery on the E3 show floor, I literally backed up and bumped into Chrono Trigger DS. “Oh, look, it’s Chrono Trigger DS!” I exclaimed as I quickly pulled out the stylus from the DS display and began to play. “I’m so excited!”

Unfortunately, it is kind of hard to play an epic RPG at an industry show — since the genre is almost impossible to just pick up in play — but I tried my best as I was very much looking forward to getting my hands on the DS iteration of one of the greatest role-playing games ever made.

So, what did I think? Does the game hold up to today’s standards? What kind of DS-specific features were added?

Hit the jump for my hands-on impressions of Chrono Trigger DS. 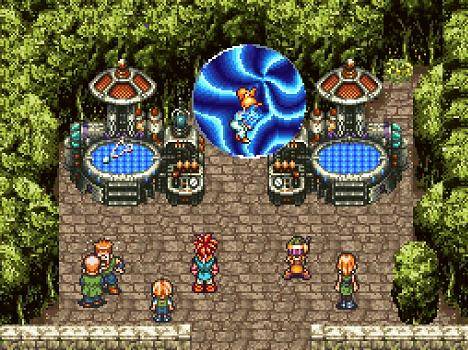 I won’t go too much into the basic facts about Chrono Trigger — if you haven’t played it yet then you really need to go find it on a Super Nintendo  right now. Seriously, stop reading this and get to playing! The game is a masterpiece.

I am assuming most of you are curious about this new port of Chrono Trigger if only to see how well it made the transition to the Nintendo DS.

I will take you through the demo I played to give you an idea how everything works. 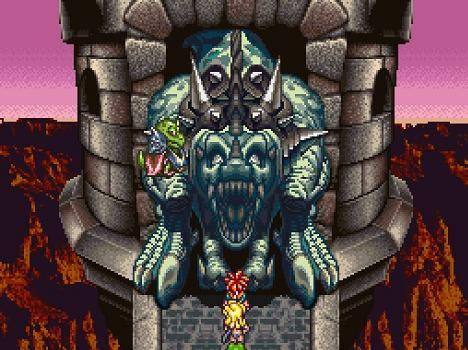 When I started up the game I was met with the classic swinging pendulum (the memories!). The pendulum starts on the bottom touch screen and slowly makes it way up to reveal the title on the top screen. Even seeing this basic dual screen action got me all excited.

After selecting to start a new game with the stylus, the screen went to black. My time traveling adventure was about to begin.

When the game starts, all the action takes place on the top screen. The bottom screen is composed of a few different parts. In the center is an overhead map of the area you are currently in. If you are on the overworld, however, the map is of the entire planet.

Hugging the left and right edges of the touch screen are different icons that work as your menu. This addition is pretty cool as you don’t ever have to access a separate menu screen. Every icon performs a different function, be it to use an item, check out your techs, or peruse the all new bestiary.

The last part of the touch screen sits long the top. Three small, gray rectangles display pictures of the members of your party along with his/her basic information (hit points, level, etc.). You can even tap these displays with your stylus to get a more detailed look at your character’s status. From this screen you can even quickly equip weapons.

Having all this stuff so easily accessible on the bottom screen is very helpful and makes playing the game a much smoother experience. 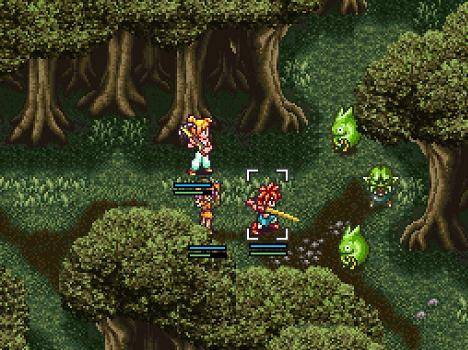 But now the big question:  Can you control your character with the touch screen? The answer is yes you most certainly can!

Imagine an invisible dot in the center of the touch screen. If you press your stylus above this mystery dot your character walks up. Press it to the right and your character moves right … and so on and so on. You get the idea.

At first I was bummed that I could only walk, as I wasn’t sure how these controls would allow me to run (in the original you just had to hold down a button), but as I fiddled with things I figured out how to do it. The farther your stylus gets away from the center of the touch screen, the faster your character moves. On a similar note, tapping the touch screen really quickly performs an on-screen action (such as talking to NPCs, etc.). I learned this while experimenting on the opening screen and trying to figure out how to close the curtains in Crono’s room.

There is nothing revolutionary about this touch screen implementation, but it all works fairly well. Admittedly, it took a while to get used to and may be too uncomfortable for some players, but the option to use the D-pad and buttons for everything is still there. In fact, there is even an option to eliminate the dual screen setup entirely — you can play the game on one screen, completely like the original if you want. I like the new features, but appreciate that this option is there. 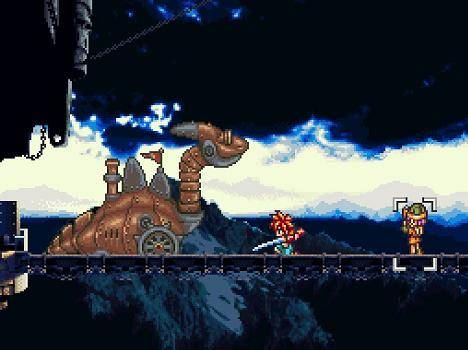 Once I mastered the new control scheme and said good-bye to Crono’s mom I headed out on my grand adventure. When I entered the Millenial Fair (north of the starting village of Truce) I really started to notice the graphical upgrade. Now, don’t get too excited: the graphics don’t really look that different. Being on the powerful DS, though, all the colors are extra bright and really pop off the screen. In addition, there doesn’t seem to be any slowdown. Of all the different versions of Chrono Trigger I have played (SNES, PlayStation), this one easily looks the best. 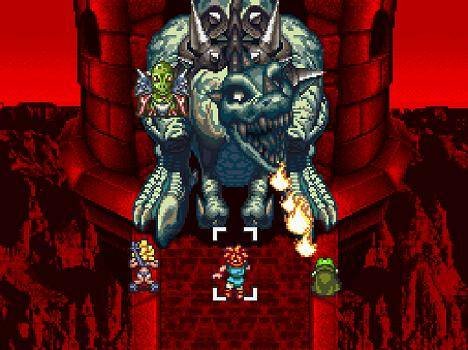 Sadly (and I am really sad about this), I didn’t get to see how the battle system worked with the dual screen and touch screen setup. As I mentioned before, trying to play an epic RPG with limited time is nearly impossible. Because of this, I couldn’t even play long enough to engage in one fight (I only made it to the part after you meet Marle for the first time). Do you select battle commands with the touch screen? Do the dual screens come into play? How does the newly added  active time battle system work? Argh! I really wanted to be able to experience the answers to these questions.

Overall, I left feeling very confident that Chrono Trigger DS is the perfect evolution for this timeless classic. Not much has changed, but I think we can all agree that this is a very good thing.