I have finally made a decision about how I feel about this game!

After the last few months of constantly switching between disappointment and cautious optimism concerning Banjo-Kazooie: Nuts & Bolts, I finally got a chance to sit down with a Microsoft representative here at E3 and put in a good amount of hands-on time with the game. And now I have finally formulated a solid opinion.

What did I think? Being a gigantic fan of the previous games in the series, was I even more saddened by the playable build, or was I pleasantally surprised? And most importantly, am I still angry the game is not called Banjo-Threeie?

Hit the jump for my hands-on impressions of Banjo-Kazooie: Nuts & Bolts.

Funny fact: While I was playing the game I kind of jokingly asked the ridiculously friendly rep if the game was ever going to be called Banjo-Threeie. Surprisingly, he actually said that was the final name until it was switched at the last minute. I couldn’t believe it! I think I even cursed under my breath a little after I heard the news. I really wanted the developers to name it that …

But, anyway, that is not why you clicked on this here jump, right? You want to know how this anticipated new entry in such a beloved series plays! 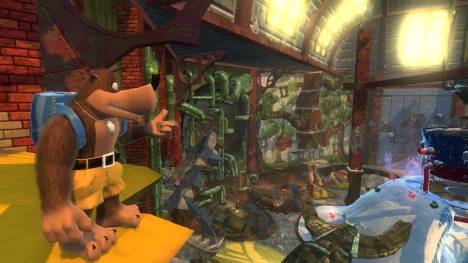 Well, I have good news for you: I loved Banjo-Kazooie: Nuts & Bolts! And I was really surprised that I did.

The build I got to play had two main parts: an enormous challenge world (one of 5, not including the more enormous hub world) and the vehicle creator.

As I started running around the world — a beautifully realized “museum” containing artifacts and objects from the first two Banjo games — I noticed how gorgeous the graphics were. Everything on screen was perfectly polished and the colors were bright and crisp. Right away I was happy because Banjo and Kazooie were running around on the ground. My fear of the entire game being one vehicle sequence after another was put to rest. Not only does Banjo-Kazooie possess all the old, classic platformer moves from the previous two games, the Microsoft rep told me the entire game was only about 70% driving. I know that still sounds like a lot, but for someone that was expecting that number to be around 95%, this figure was nice to hear.

But there is no reason for me to be negative about the vehicle stuff in the game anyway. When I did get to pilot the multiple vehicles lying around the world — a tank, helicopter, boat, and jet — I had so much fun! Each vehicle controls beautifully and appear to be designed by some mad LEGO scientist! But I guess I am getting ahead of myself. Let me really quickly give you an overview of how the game works. 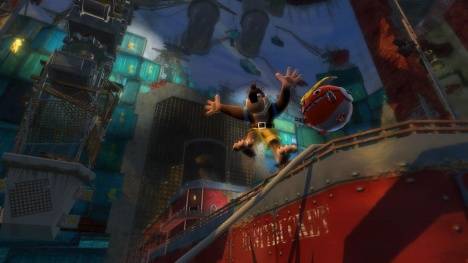 While running around one of the huge worlds, Banjo and Kazooie will be able to approach and talk to many different characters (side note: the nonsensical gibberish speak makes a glorious return!). Each of these characters offers a new challenge — a challenge that, if successfully completed, will award Banjo and Kazooie various things (jiggys, parts for your vehicles, blueprints, etc.). Luckily, the challenges are completed varied; some are traditional races, others are classic platforming bits. Some are even so strange that I didn’t even understand what was going on.

During the challenges that involve a vehicle, the player is given two choices: either use the pre-made vehicle on hand or call forth one of the crazy contraptions created in the vehicle customization garage (more on that in a second). Once a challenge is conquered, Banjo and Kazooie obtain items to help them move on to bigger (and tougher) tasks. It is a basic concept, sure, but everything is presented really well. 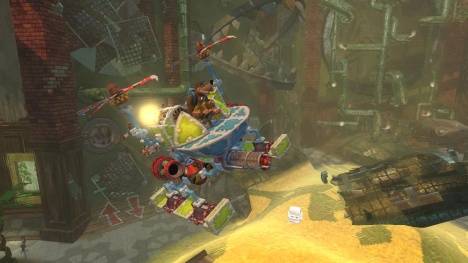 So, about the vehicle customization. At first, I was ridiculously overwhelmed at how complicated everything seemed. Luckily, the Microsoft rep informed me that almost every item was unlocked for the demonstration and that the final game will have a much more manageable learning curve. Basically, the way everything works is this: You start with a seat for your vehicle, add a body, an engine (or two), fuel canisters, and some wheels (this is only small chuck of the numerous contraptions you end up having access to). After preparing what looks like a sturdy vehicle, the game lets you try out your creation in a fun stunt course complete with all types of terrain. Are your wheels to small for your body? If so, the amazing physics will show you that your creation is not fit for travel. And that was the thing I found the most addictive about the vehicle creation mode. There are millions upon millions of possible combinations you can build, and each one handles completely differently. Creating something and testing it out on the stunt track was endlessly addictive. Honestly, they could design a game around this concept alone and I would probably buy it.

But that’s what makes Banjo-Kazooie: Nuts & Bolts so wonderful (and so unique!). The vehicle creation is implemented so well into the overall gameplay. And, yes, the gameplay does feel like the older Banjo games. Banjo collects musical notes (used as currency in this iteration); both Banjo and Kazooie can upgrade and learn new moves (by training in a gym); Grunty is back and the story and writing is as clever as ever. Trust me, I was one of the naysayers, but once you get your hand on the game it truly feels like the third game in a cohesive series. The vehicle usage is a little odd at first, but the way it is tied in with the overall gameplay is amazing. Say you are having trouble completing a challenge that involves transferring giant orbs into a large, fenced-in area. The vehicle the game gives you to use is perfectly fine, but you start to have trouble completing everything in a timely manner. By going into the creation garage, you can build a brand new vehicle using parts you have found in the game to create something that works specifically for the challenge you are trying to complete. Using the scenario I offered as an example, you could build a vehicle with a huge hand sticking out of the front. This hand could be used to push the orbs into the goal. On the other hand — and the Microsoft rep told me about this exact situation — another player may build a vehicle with a giant basket and claw that has the ability to store multiple orbs all at once! It is this endless, creative customization that truly blew me away! 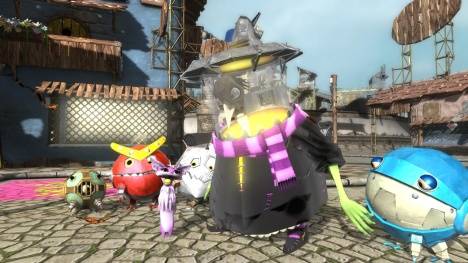 There is still so much more to see in Banjo-Kazooie: Nuts & Bolts, but already I am very impressed. The best thing a demonstration can do is make you want to play more of the game and I can easily say that happened. The creative possibilities of the vehicle designer are almost infinite and I already was thinking about what kind of fiendishly clever creations I would eventually be able to try out.

Finding out that Banjo-Kazooie: Nuts & Bolts feels like a real Banjo game was enough to leave me satisified. Discovering the game is superbly designed, eye-poppingly beautiful, and wholly original was just icing on the furry cake.