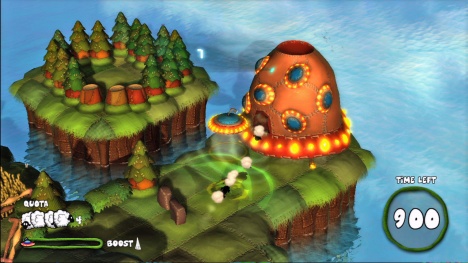 When I headed to Capcom to see Flock!, I wasn’t entirely convinced that I was about to play a game where I take the role of an alien beaming up sheep and other various farm animals into a UFO. I mean, I had seen the video, but … seriously? Because that sounds pretty much like the most awesome thing I can imagine doing. Tell me more.

Capcom certainly shared my enthusiasm, showing me more of the Lemmings-esque title and spilling some delectable new details. Developed by Proper Games, the fifty level beam-a-thon also comes packed with a level editor so you can craft your own fields for the animals to wander in and share them with friends. It’s for Xbox Live, PSN and PC, so most interested gamers should have a way to play it.

Gameplay is simple and clearly has that hook that makes it addictive — humor. As you fly around the levels directing your Tractor beam, the cows, sheep, pigs and chickens react accordingly. They also react to the enviroment, screaming at the sight of scarecrows, getting lost in crops, and being kind of generally dumb, which makes them ideal prey but leaves you feeling a tad sorry for them. Don’t worry, you’ll get over it.

The art style is polished with a slightly whimsical touch, but it avoids the pitfall of looking too childlike, which can sometimes be a turn off. Did I mention that the cows poop when you hit them and pigs come and roll in the poop joyfully soon afterward? Yeah. I couldn’t make this up if I tried. There’s all kinds of ways to play with physics in the game, from catapulting the animals across land to using them as bowling balls (and yes, you can score a strike!).

Flock! will be available this Holiday season. I expect to hear stories about flinging cow poop adventures in multiplayer, people. Don’t let me down.

Innovative Puzzles and Physics Based Gameplay with a Fuzzy Feeling Comes to the Downloadable SAN MATEO, Calif. — Jul 15, 2008 — Capcom® Entertainment, a leading worldwide developer and publisher of video games, today announced Flock! (working title) for PLAYSTATION®Network, Xbox LIVE® Arcade for the Xbox 360® video game and entertainment system from Microsoft, and Windows® PC. Developed by Proper Games™, whose talented team members are known for their previous work on Lemmings, Crackdown, and Battlefield 2: Modern Combat, Flock! is currently scheduled for a downloadable release this Holiday season. In Flock!, players take control of a UFO that has been given the challenge of herding farm animals to its mothership through a variety of puzzle-filled interactive levels, including corn fields, pastures and other “plushie”-like environments. In order to succeed, players will have to manage the quirkiness of the animal’s distinct behaviors, as well as solve a series of environmental puzzles using Flock’s! physics-based gameplay. The animals that populate these islands – sheep, chickens, pigs, cows and more – respond to the UFO in all kinds of eccentric ways based on their nature. By finding or creating a passable route across a level, players can herd the animals safely toward their ship. Solving the puzzles within the suggested time limit yields exciting rewards, but players can also take their time in order to find more hidden bonuses. With a unique theme, clever humor and easy pick-up-and-play controls, Flock! promises to be an instant hit with gamers of all ages! Flock! uses a sophisticated physics engine that drives the challenging puzzle elements of the game. Whether using the Tractor Beam to move obstacles out of the way or the Depressor Beam to stamp out crop circles to guide your herds, being an extraterrestrial has never been this fun! Friends will also be able to join in on the animal herding adventures through co-op play. And when all the levels have been completed, the journey is just getting started as users will be able to make their own customized puzzle-filled levels using the level editor. Flock! comes packed with so much content, the potential fun is out of this world!