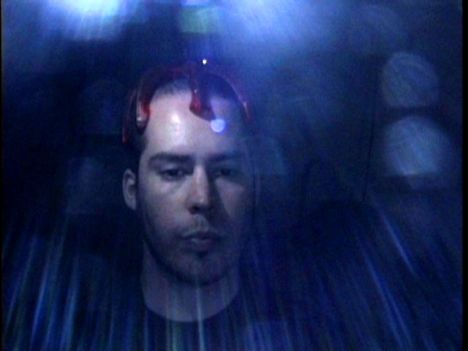 Do you love videogames, but hate the fact that you don’t look like a total tool while playing, then maybe Darkgame is for you!

Imagine a game where one player is the hunter and the other is the hunted. The hunted can see the game world, but the hunter is totally blind and must track his quarry by following electronic pulses transmitted to a little plastic glove which surrounds the player’s head.

It’s kind of fun — sensory deprivation is cool — but also sort of awkward and gimmicky, considering each player takes fifteen shots to die and you can only fire in eight directions. I got a little tired of playing after about three minutes, but the head-pulsing thing was kinda neat. It felt like someone lightly poking me on the head in the direction I was supposed to talk.

There’s not really much else to say, apart from the fact that the creators are looking at an Xbox (the creators didn’t specify retail or XBLA) release.