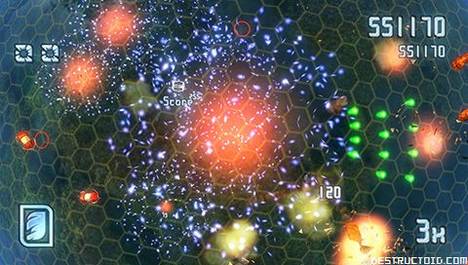 If you’ve passed on Sony’s PlayStation 3 “answer” to Geometry Wars, Super Stardust HD, you’re doing yourself a great disservice. Not only is it an arguable better game than Bizarre Creation’s twin-stick Xbox LIVE Arcade shooter, but it’s the PS3 title to award trophies, and your street-cred is in jeopardy if your trophy score is still “zero.”

Whatever your excuses for not playing it are, they’re dwindling. At this year’s E3, Sony announced that a portable version of the title, cleverly titled Super Stardust Portable, will be coming to the PlayStation Portable this year. Following the game’s announcement, we tracked down a playable version of the game in Sony’s private lounge and were surprised to find that, yup, it’s Super Stardust … portable.

More details and hands-on after the jump. 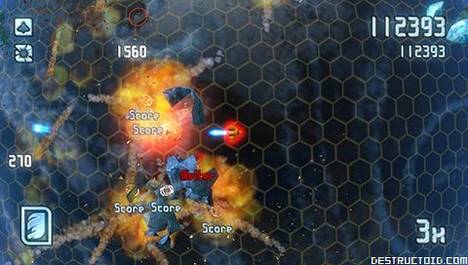 When visualizing Super Stardust on Sony’s handheld, there’s just one problem you might be not be able to get your head around: there’s only one analog stick. Yes, Super Stardust HD was of the popular “dual analog” shooter variety, where ship movement was controlled with left analog and firing with the right.

Developer Housemarque takes a hint from the book of the Super NES classic Super Smash TV, mapping fire to the PSP’s face buttons. Triangle fires up, X fires down, square left, and circle right; combination of two (triangle plus square, for instance) will fire diagonally. By pressing three buttons at once, it was possible to automatically sweep fire in a whirlwind-like fashion, which was nice for clearing out swarms of enemies.

Bombs were detonated with the right trigger, and the left would cause the ship to get a burst of speed, both of which should feel familiar to players of the PS3 title. Weapons could be swapped by using the PSP’s d-pad, which requires you to take your finger off of the analog stick, which unfortunately leaves your ship temporarily immobile. Overall, the controls work nicely on the handheld, although the age-old problem of things feeling “cramped” on the PSP remains. This couldn’t have been helped by the fact that the PSP was strapped down to the bar in the Sony lounge, as if I might have made off with the unit otherwise. (Note: I would have considered it.) 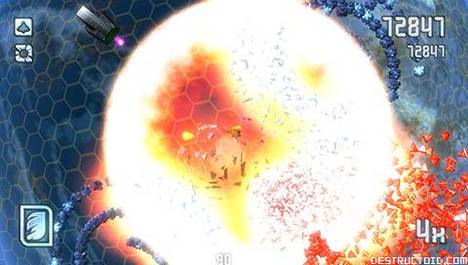 Visually, the game looks great on the PSP, and will retain all of the enemies, bosses, and modes found in the PS3 version. There will also be a PSP specific mode included in Super Stardust Portable, but it wasn’t selectable or playable in the demo. Listening carefully, I was also able to hear some of the game’s remixed music tracks, which sounds pretty slick and should hit home with Super Stardust HD fans.

So the good news: Super Stardust Portable is as good on the go as it is in high definition. Bad news: no word on release date, price, or whether it’ll be the first PSP game to support the rumored portable trophies. We’ll see when the game drops later this year.