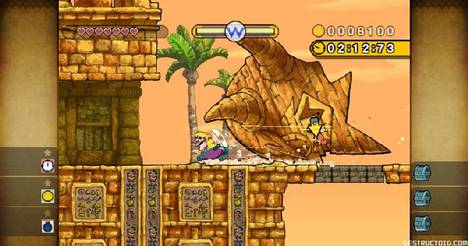 I’ve always been a big fan of Nintendo’s squat, greedy little anti-Mario, Wario. So when Nintendo asked me what I wanted to get my hands-on first, I didn’t say Animal Crossing: City Folk or the Kid Icarus game I hoped they were hiding. All I really wanted to see what Wario Land: Shake It!.

A classic-style side-scroller, Shake It! follows Wario as he travels to the Shake Dimension to shake down the tyrannical Shake King and help rescue the imprisoned Merfles by shaking cages. Like Jerry Lee Lewis said, “I married and had sex with my underage cousin, and there’s a whole lot of shakin’ goin’ on.”

Hit the jump for hands-on impressions. 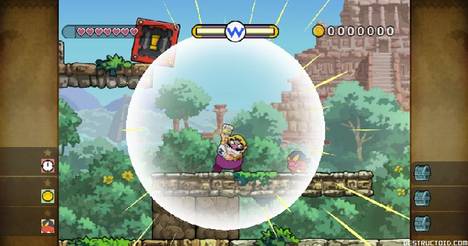 Good news for fans of the old-school, Shake It! is a traditional 2D side-scroller. The controller is held sideways in a more “traditional” controller fashion. You move Wario with the Wii Remote’s d-pad; one button will cause him to power-dash, and another will make him jump. The moves can be combined to do a horizontal power-dash, and jumping up and pressing down on the d-pad will make Wario perform a butt-stomp.

Of course, the motion controls of the Wii Remote come into play as well. Wario can grab bags of treasure, and shaking the remote vigorously will release the goods. Enemies can be grabbed and shaken down as well, to reveal more treasure and goodies. Objects and baddies can also be grabbed and tossed; the angle of an arrow reticle — similar to that found in Yoshi’s Island — can be manipulated by turning the Wii remote from side to side before the object is tossed. Finally, shaking the Wii Remote by itself makes Wario punch the ground and cause a mini-earthquake. 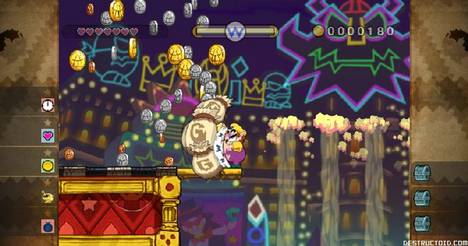 All of Wario’s abilities were used during the early level I played, whether it was slamming through blocks with the power-dash or breaking through the floor with a butt stomp or ground pound. The areas contained simple-yet-fun “puzzle solving” elements that required me to use a variety of Wario’s abilities to move forward or reach treasures and items.

You can tell from the pictures that Shake It! has a gorgeous hand-drawn, cartoon feel. What you can’t see is the game’s amazing animation; I was particularly impressed by Wario’s butt wiggling as he forced himself down a green warp pipe. OK, that didn’t sound right.

Based on my short preview, I’ll definitely be shaking money out of my wallet when the game hits ships on September 22.