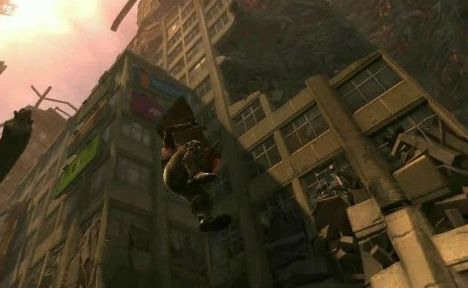 First things first: Chad did a damn fine writeup of his impressions of the new Bionic Commando at GDC, and Capcom has a similar build here at E3. The major difference between the two builds is a simple, but incredibly important one: the one at E3 was playable for everyone.

And I played it.

I’d highly suggest reading Chad’s article for a quick summary of the actual events of the demo (there’s a really awesome explosion!).

After you’re done with that, hit the jump to hear the impressions of a man who has never spent more than thirty minutes playing the original Bionic Commando, hated Lost Planet, and has a very tenuous grasp on grappling hook physics.

As I said, I’ve not spent a significant amount of time with the original Bionic Commando, so my understanding of how the game “should” feel to an oldschool fan of the series is pretty much nonexistent.

I did play Lost Planet, however, so I at least know how grappling hooks shouldn’t feel.

Again, my demo took pretty much the exact structure of the one Chad played: there’s a great looking explosion on a street, then a lot of grappling, then some shooting of random baddies and ultimately a fight against a helicopter.

The bionic arm is a bit difficult to get a hold of, at first. It works pretty much like you’d expect it to (left trigger attaches, your momentum determines your speed and jump length), but certain mechanics like ziplining or climbing a wall by jumping up the rope (think of it as reverse-rappelling) took a few minutes to really grasp.

When I say this, however, don’t assume that it means I spent thirty minutes fumbling with the controller, trying to find a way to attach my hook to a loose beam: within five minutes or so I was swinging and latching onto things with a serviceable (if not noteworthy) dexterity.

The first level was just about learning the grapple mechanics, where the second was about fighting soldiers.  You click the right stick to enter aiming mode, and pull the right trigger to shoot.

I didn’t try shooting while grappling (it just now occurred to me that that might have been possible), but evidently the miniboss fight which ends the level can be completed using only the grappling hook.

Yeah, there are bosses. The sound designer told me they were huge things which the player would actually have to jump onto and climb around on (I likened the idea to Shadow of the Colossus, and he agreed), and that they wouldn’t be as simple as just grappling the dude’s armor off and then shooting their weak point a bunch of times.

So, anyway, a miniboss. At the end of the second level, a big helicopter showed up and (in what I can only assume was either a bug, or a friendly way of keeping the player alive just for demo purposes) sort of hovered in place and didn’t shoot at me. Since I am a stupid jackass, I immediately shot five rockets and threw three grenades at it, only to turn, grinning, to find the sound designer holding back that awkward mix of pity and irritation we all feel when someone is doing a bad job of playing a videogame and they were trying to find the right moment to interject suggestion.

Essentially, I was supposed to (as in, I would have had more fun) jump off a building, grapple the bottom of the copter, zipline up, and kick the pilot in the face or something.

Instead, the boring, rocket-destroyed remains of the copter slowly fell to the water below, and I left the Capcom booth feeling a mixture of inferiority and gamershame.

But yeah, the demo was pretty fun.