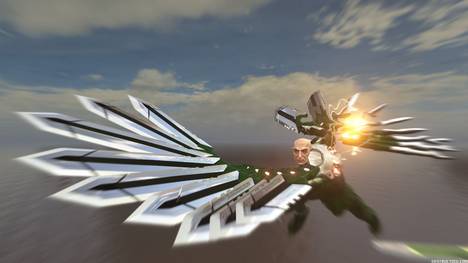 If you’re burnt out on Activision’s steady flow of Spider-Man titles, you might want to give a second look at Shaba Games’ Spider-Man: Web of Shadows.

During a video demonstration of the game at last night’s “not E3” press conference, Activision showed off some of the game’s cool looking and intense combat, which features both air battles and vertical wall fighting. Additionally, it looks like the game’s mechanic involves switching between Spider-Man’s red and black suits on the fly; the red suit will give Spider-Man quicker, more acrobatic abilities, while the black suit is for more aggressive power fighting.

Activision was kind enough to pass along a few screens of the game, including one image of one of the game’s enemies, Vulture. Is it  me or does his face look like it was ‘shopped into the picture and completely out of place?

Web of Shadows will be available on whatever videogame system Activision can get it on this Fall.