Oh, Scribblenauts, you held such promise. Your innovations were so fresh and exciting, I remember being blown away by watching God fight the Kraken at E3 and the wondrous tale of Post 217. A game where literally anything I could think of could be used to solve a puzzle? Effing Ess! This game is f*cking astounding!

Let’s start with the games primary conceit: the lauded ability to “write anything, solve everything”. As enamored as I was with this profoundly original concept, the glimmer began to fade several hours into the game. And in hindsight, I think I let my schoolgirl crush blind me to issues that showed up even before the games release.

I remember reading an early preview of Scribblenauts at E3. The writer of the article elaborated on one of the earlier puzzles in which Maxwell has to make his way past a bee. The player had a brilliant idea: make a beekeeper. Sadly, his beekeeper got too close to the bee and was stung to death. That’s funny, no doubt, but it’s also telling of the games shortcomings.

During my own playthrough, I was shown a man and told to entertain him. In what I considered a clever move, I generated a movie theater. No dice, dude just stood there staring at me blankly. OK, clearly not a film buff. This speaks to another issue I haven’t fully explored, but I ran into on occasion: the fact that buildings almost universally do nothing other than sit in the background. Their inclusion in the game seems to solely provide bragging rights for 5th Cell, not to help you solve puzzles. If specific buildings can be used to solve puzzles, I haven’t seen it.

Unfortunately the game just isn’t smart enough. I realize what a monumental task it must be to make sure every conceivable item works perfectly with every other conceivable item, but hey, it wasn’t my idea. You can’t promise us the world and then phone it in. The game ought to realize that a beekeeper would be able to handle one measly bee. Play the game for four or five hours and you’ll find that too often creativity is punished (or simply not acknowledged), and this negative reinforcement steadily chips away at the ethos of the game.

A symptom of the creative illness Scribblenauts suffers from is the Helicopter/Rope dilemma. At the risk of sounding like Yahtzee’s review, a helicopter and length of rope can be used to solve waaaaaay too many of the puzzles. I’m a staunch advocate of player creativity. I think finding one sick combo or method to beat a game and spamming it to win is antithetical to gaming in general. That said, in Scribblenauts it becomes impossible to ignore that a helicopter and rope are so goddamn useful, especially when all of your thoughtful, creative items fail to accomplish anything. 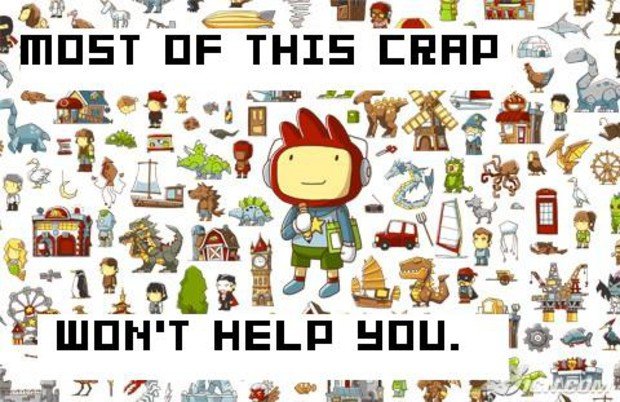 It also doesn’t help matters that controlling Maxwell feels about as natural as balancing an egg on a toothpick. It becomes apparent early on that you don’t control Maxwell so much as aim him. I understand what 5th Cell was going for with the stylus controls, they wanted to simplify the input since they’re already overwhelming the player with puzzle solution options. But it just flat out doesn’t work. I tell Maxwell to throw a rock and instead he spasms violently and lemmings himself off a cliff. After a point it stops being my fault.

So Maxwell controls like a drunken toddler, the “write anything” idea often fails to reward real creativity, and many of the puzzles can be solved with a helicopter and length of rope. These would be game killers if Scribblenauts weren’t peppered with those hot-christ-that-just-fucking-happened moments. Like creating a blackhole to kill the Dragon in your way. Or when the penguin I was supposed to feed decided to dive into the water and just eat the fish he wanted, regardless of my help. If there’s one thing I can give Scribblenauts: it’s random. Consequently, it’s hilarious.

Verdict? Scribblenauts is the right weapon, but 5th Cell are just piss poor marskmen. Regardless, I fucking love that it exists, and that 5th Cell at least had the balls to have a go at it. And while I don’t want to diminish the level of effort and originality put into the game, it’s impossible to ignore the glaring flaws. Doesn’t matter. 5th Cell now has a solid foundation to work with, hopefully they can tweak and refine the mechanics until we get a sequel that can actually live up to the brilliant concept.

This promoted blog was written for our April Monthly Musing assignment, “E For Effort.” You too could get promoted if you write something about games you hate but respect over on the Community Blogs.