Back in early 2003, little thirteen-year-old me came across an imported copy of an unofficial GameCube magazine, Cube. My father had told me about the magazine once since he had seen it before and suggested I pick it up since it came with codes and a DVD. Yet, I wasn’t expecting this UK magazine would be the start of wild ride I would endure for years. I can’t recall the exact copy since, for some reason, it only has the issue number on the cover and not the month/year, but something on its cover made my young heart pound madly. Written in big bold white letters over blood splatter were the words: “Resident Evil 4 – Monstrous 6-page feature”.

The article was written in one of the most unique ways I have ever seen in media as it was written from Leon Kennedy’s point of view. As he reported his experience and encounters, they revealed the little bit of information that Capcom had released to that point on the game. Talks of a Nemesis-like creature, Leon being infected, Sherry’s disappearance filled every line which slowly began to build up the hype within me. Not long after that was E3 2003 where some actual footage was shown. The game had a very tense, creepy atmosphere and showed the early development of the series new gameplay style. 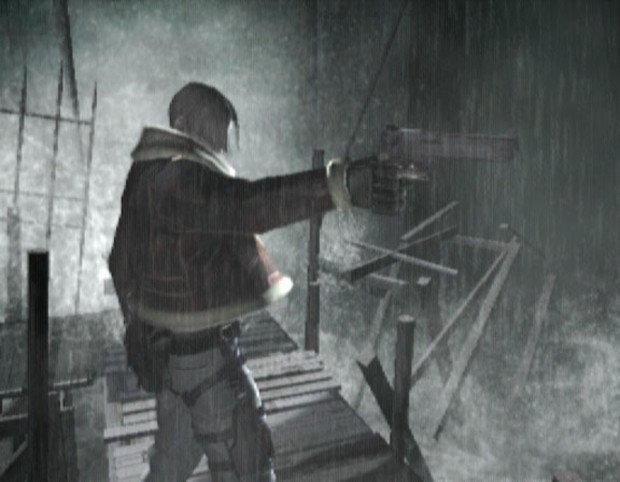 I purchased a few more copies of Cube over that year since the issues included mini-DVDs with the footage and trailers shown. I use to watch those DVDs multiple times as I began to be a little nerd and theorized on the direction the game’s story would go. At the time, Sherry had been kidnapped by Wesker, Spencer’s location was still unknown, and Umbrella’s headquarters was still untouched. I managed to figure out ways to get all these remaining plot holes to work. As time went on and more and more information was released, I was dying to play the game. Its heavy horror-atmosphere and on track plot line mixed with an updated gameplay style was beginning to become my “perfect” game.
A year or so later, another issue of Cube was released with another detailed look at Resident Evil 4. There on the cover stood Leon with a sacked man carrying a chainsaw behind him. Eagerly, I picked up the copy, bought it, took it home, and began to read it…

Wait the hell is this?

The name was the same. The character was the same but yet it felt like I was looking at a completely different game. The atmosphere of a large airship and castle engulfed by fog was gone. Instead it had been replaced with a depressing village. The sickle-carrying creature I was terrified of was gone. As for the story? It was a mess. What had happened to my “perfect” game?

In an interview, Hiroyuki Kobayashi said for fans to forget everything they had seen and knew about the game before 2004 because everything had been scrapped. The main reason behind the rebuilding of the game was that the development had felt the game had become too risky to release. Perhaps this is true but I can’t help feel that completely scrapping their previous work was unnecessary. Though regardless of how I felt, the gaming community’s opinion was the complete opposite. Critics highly praised Resident Evil 4 for its revamping of the series with new gameplay styles and action-based approach. Gamers loved it since it was easier to play. For many, this was their introduction to the Resident Evil universe. Yet as everyone around me shouted at the top of their lungs about how much they loved the game, I’d make the room fall silent as I stood my ground to say, “It’s not really that good”

For starters, Resident Evil 4 is a sequel that fails to fully progress the series properly. We may have seen the return of some known characters — Leon, Ada, and Wesker — but much of the game’s plot makes no sense within the series plot line. The game series contained many plot holes. Some were later filled with the release of the Umbrella Chronicles games years later such has who Krauser was and how Ada managed to survive plummeting to her “death” in Resident Evil 2. While those could technically be considered nitpicky complaints, others will always remain a mystery. For example, we still have no clue as to where Sherry Birkin is. The last time we heard about her was in Wesker’s Report when Code: Veronica was released. The original game was supposed to have Leon saving her. Instead, we were given Ashley Graham. Why couldn’t they have had Sherry still be the character you were sent to rescue?

Think about it. Resident Evil 4 takes place in 2004, six years after the first game, five years after Resident Evil 3.5. The official story has Leon becoming an agent. OK, that works, but his mission is to save the President’s daughter from a cult. OK, still works but it feels very unfitting for the Resident Evil universe. Now, imagine if Ashley was replaced with an eighteen-year-old Sherry Birkin. Let’s switch the plot around a bit. Leon could still be a government agent but now his mission is to retrieve Sherry since she was originally under government supervision before her kidnapping. The story would fit more into the series but still have the more “action based” plot line. The reason for her kidnapping could have been because Saddler discovered that she was being used as an experiment by Wesker and took her to use for his own terrorist plans, thus also giving a slightly better explanation was to why Wesker was there. Though that would require some tweaking for Resident Evil 5, but it’s possible nonetheless.

Enemies were another issue. A variety of interviews and comments throughout the years, even after the game’s official release, mentioned how they felt their previous idea was too “paranormal” to be a Resident Evil title by having a creature that could break itself down into a cloud of material in order to disappear. Well, they could have removed this boss or possibly made some changes to it to make it more suitable to the scientific approaches to enemies that the series is known for.

The removal of zombies was another upsetting situation, not just for me but for other fans of the series that I’ve spoken to. I fully understand and respect Capcom’s feelings about how zombies were growing dull, but they were a trademark to the series. Their removal wasn’t needed. If Capcom wanted a faster, more threatening enemy, why couldn’t they have expanded upon the concept of the Crimson Head? Surely a faster moving zombie with razor sharp claws and the ability to vomit acid on you would be just as threatening as villages. They could have even taken it a step farther by saying that over the years, Saddler managed to make them evolve more with his own viral creations by having “Land of the Dead” styled zombies that were more intelligent and capable of using some weaponry.

The game’s atmosphere was another factor I found disappointing. Up until this point, I had always had an uneasy feeling when playing a Resident Evil title. The feeling of isolation in the mansion hung heavily around me as I found that I had no contact to the outside world for help and was trapped within its walls. The desolate Raccoon City sent chills down my spine; I’m not sure why, but I always feel depressed and worthless in the world whenever I think about an abandoned town or city. The idea of thousands of people losing their lives or finding the city literally stuck in time as things remain just how people left them before their deaths messes with me. Or knowing you’re a trapped prisoner on an island prison controlled by a psychotic transvestite will certainly make you feel uncomfortable. Yet, I found Resident Evil 4 to be lacking of any of this.

There were a few moments that felt tense such as wandering around the graveyard during the thunderstorm at night or parts of the church, but the dreadful feeling I had grown to love from the series was gone. It’s been replaced with a more action feel to them. I can see where that is more appealing but that’s not what you should be playing a Resident Evil game for. Taking the horror element out of Resident Evil is like removing a roaring crowd from any Rock Band or Guitar Hero game. While that’s not the best simile, the feeling is pretty much the same. The crowd’s purpose is to make you feel like you’re a famous guitarist, singer, or drummer who is on the top of the world for your fantastic music just as the horror elements in Resident Evil is suppose to make you feel vulnerable. Removing these parts of the game wouldn’t really ruin the experience completely but it certainly would make the way you feel while playing it much different than you’d expect. You wouldn’t feel like a famous band member if Guitar Hero took place in nothing but a recording studio; just as how I didn’t feel very threatened while playing Resident Evil 4. 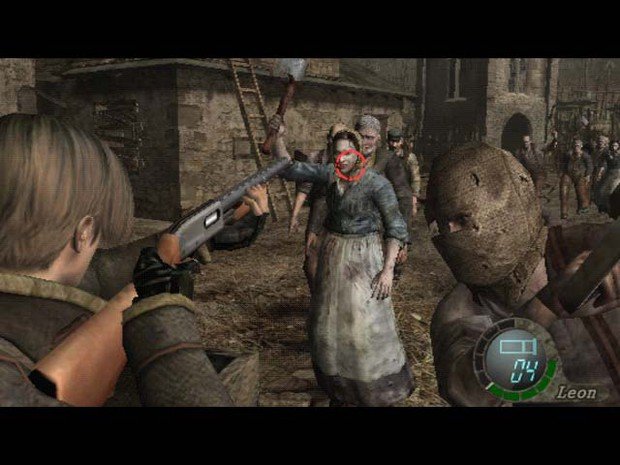 Finally, we have the gameplay and camera angles. While “Resident Evil 3.5” eventually did have the free aiming, it still housed fixed camera angles. Trailers and later-leaked gameplay footage showed an immature crossover of fixed camera views and free views. The angles themselves were fixed by the camera still moving along with the character, revealing more of the corridor as the player progressed. While this was still frustrating, I do not see why they couldn’t use their “final product” camera while still having the more horror-based theme and a story that fit better into the plot line. Just look at “Lost in Nightmares” scenario for Resident Evil 5. The chapter itself may not have been terrifying, but it showed a nice blending of the over-the-shoulder camera angle with free roaming aim while still having parts of it (like the doors opening and close quarters) that resembled what I use to know.

While I highly respect how Resident Evil 4 incorporated new gameplay mechanics and updated the series which brought life back into the dying series, I can’t help but feel that Capcom made a lot of wrong decisions when it came to its final product. They could have made very minor alterations to their original work in order to make the game more appealing and satisfying for fans while still opening the door for advancements with the series and welcoming new comers. Resident Evil 5 suffers from similar problems but at least it attempted to offer fan service via its plot by trying to add closer to some loose ends.

The game’s great and I’m happy for its success. I don’t mind people saying they love it though I can’t help but cringe when it’s called “the best” Resident Evil game on top-whatever lists because it’s almost the opposite of what Resident Evil is. I’m not ashamed or afraid to say it’s one of my least favorite games in the series; hell, I’ve tried to replay it but I can’t keep my interest in it beyond the first half an hour or so even though I’ve replayed some of the previous games multiple times just out of pure enjoyment. Though that’s just me.

This promoted blog was written for our April Monthly Musing assignment, “E For Effort.” You too could get promoted if you write something about sex in videogames over on the Community Blogs.