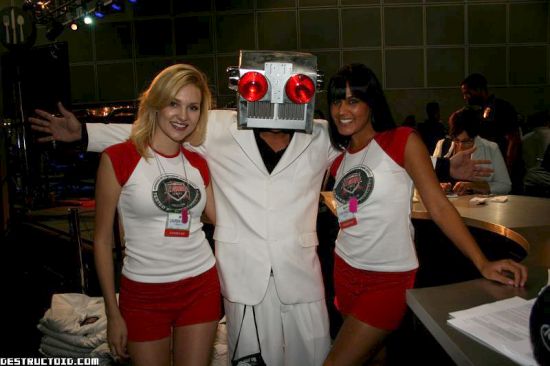 Well this was a pleasant great surprise: whereas E3 strictly prohibited hot scantly clad women in its new tight-lipped format, E For All proudly embraced the old tradition of hiring models to add a little eye candy to their booth.  We had the opportunity to speak to some of these ladies and, for the most part, they had little idea what a Mario is. Most are hired models from local agencies here in LA, don’t game, and kick puppies when nobody is watching.  Meh.

While the pickings were slim in comparison to TGS or the old E3 shows, the award for best pickings goes to Nintendo (of all companies) who had both the most booth babes and best outfits: very short skirts FTW. I think Nintendo also had some video games at their booth but we’re not sure what they were. Smash … something.

Want more? Check out our Booth Babe review and women in gaming archives.