We’ve been looking forward to spending more quality time with this portable prequel to the Silent Hill series, and we recently had a chance to get lost in our favorite freaky town at the E for All Expo.

A big concern has always been that the immersive world of Silent Hill has been crammed down into portable game, but I’m glad to say that most of my worries have been lost in the fog; the full experience fits nicely on the PSP. Visually, Silent Hill Origins looks a lot like its older brothers on the PS2, and especially similar to Silent Hill 2. Climax has done a wonderful job with the look and feel, and if you manage to get out of the sun and put a pair of earbuds in, you’ll be fully immersed.

Hit the jump for more on Silent Hill Origins. 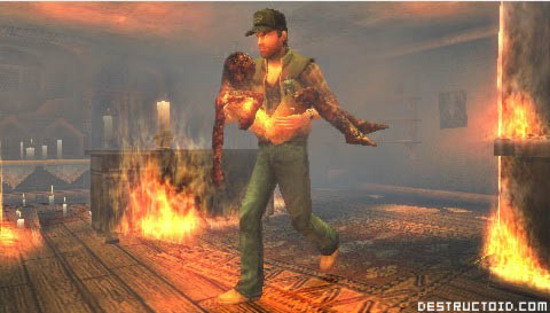 Attention to detail isn’t something you look for in portable titles, but SHO has detail in spades. For a grainy, gritty horror game, visual details like shadow and lighting are impressive, and the buildings and backdrops sometimes even give the older SH titles a run for their money. The game’s environment showed several details as well. Creepy visual distortion pops up when an enemy is nearby, and the fire and flame effects look closer to something you’d see on a Xbox 360 or PS3 than a portable. I also liked finding little touches like coming across the intersection of Crichton and Koontz — an obvious nod to horror writers.

While we’re relating SHO to past titles, it should be said that the game controls very similar to Silent Hill 2 and 3, with the “challenged walking” that so many have a love/hate relationship with. Our new trucker hero controls in a very similar way to past protagonists, with walking assigned to the analog nub and running assigned to a face button.

The combat is a bit tighter (read: easier) than I would have liked to have seen. Attacks seem more direct and less lethargic than in past games, and much like the movement control, some will see this as a plus while fans of past games may not like the change. Bare-fisted fighting can take down an enemy, but real world items like pipes and medical tools are equippable, though they eventually break and leave you bare handed again. 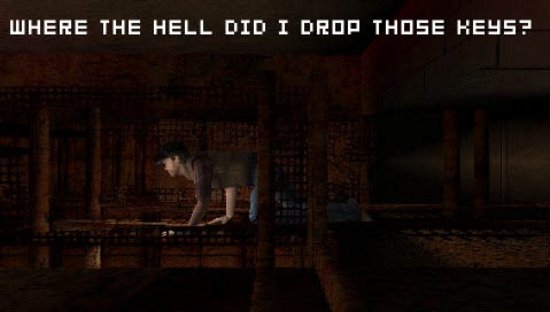 While Silent Hill Origins looks like older Silent Hills, and it plays similar to older Silent Hills, it’s not near as scary or tense as the previous titles. I don’t think that this has much to do with being a portable title — it’s every bit as immersive as it needs to be — but the reasons may lie more with the setting and developing story. We’ve already seen burning people, twitchy nurses, and creepy little brunette girls wearing blue dresses in past games and movies. I know this game series takes place in one town, but I couldn’t get over the “been there, done that” feeling that hit me around every corner. Nothing seemed fresh or new, and aside from throwing portable televisions at nurses’ heads, I felt like I had done all of this before. None of the enemy encounters were scary. I found myself running from zombie nurses, but it wasn’t because I was scared — I was running because I was tired of fighting zombie nurses.

I hope that the game gets a bit more challenging or imaginative as the game goes on, but my time with it left me impressed, but wanting much more. So far, it seems like a solid portable horror game, but I like a bit more scares and freak-outs in my Silent Hill.