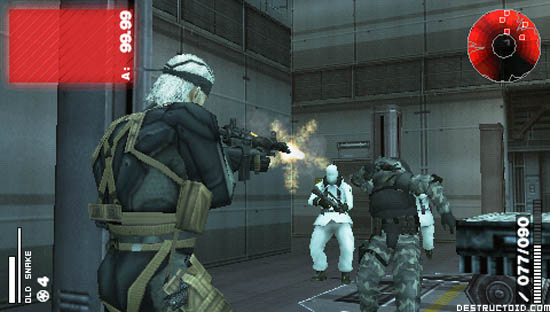 As a gamer who cites classic titles like Romance of the Three Kingdoms, Dragon Quest, and Shining Force as my “gaming roots,” it should’ve have been readily apparent that I am easily the worst candidate among Destructoid’s staff for a deathmath-style game hands-on. But, my sense of duty won out, and I ended up taking on a Konami rep to put Metal Gear Solid: Portable Ops + for the PSP through its paces.

If you haven’t heard, Portable Ops + is a sort of expansion to last year’s Metal Gear Solid: Portable Ops, bringing us a dedicated disc of multiplayer deathmatching goodness for the PSP. Think of it as a separate expansion, bringing new characters (from all over the MG universe), maps (some from older MG games), and missions to fans of online battling in the Metal Gear world.

I bravely took up arms as Snake in a one-on-one deathmatch against a Konami rep in a small arena where very little cover could be found. I picked up my PSP, gave my opponent a “ready” nod, and was promptly slashed in the back of the head by his Raiden. Great.

Hit the jump to read more on MGS: Portable Ops +.

The game play is simple, fun, and addictive, even if you’re losing badly. Each character has their own weapons, and Snake had a choice of four close combat and range weapons. I opted for the Sniper Rifle with enough subsequent deaths while aiming to know that I should stick to the Machine Gun. Sadly, that didn’t help much.

The control scheme is simple enough for a green horn like myself to fare pretty well. You can opt to switch things into a first-person shooting mode, all your favorite stealth moves are still there, and sniping from a distance is blissfully easy if you destract your opponent outside of game play. Unfortunately, that only happened once.

Several rounds and many, many “Raiden killed Snake” messages later, I came away with the genuine desire to blow off the rest of my scheduled meetings that day and punish this Konami rep, who, after the first couple of kills, would slyly look up at me and grin every time he managed to score another point. No one will argue that Metal Gear Solid: Portable Ops wasn’t a solid game, and that the multiplayer action was great. All of the greatness and several nifty upgrades have been packed into Portable Ops +, making for a very sweet package. It’s even more appealing knowing that the whole thing will only set you back $20.

I didn’t get a chance to toy with the “Infinity Mission” mode, which is a set of stealth obstacles you can take on to earn more goodies for online play. The online component itself was enough to sell me, and knowing that there are many more characters, maps, and this Infinity Mission in store, I’ll be ready to snap up my copy on November 13th.

That Konami rep had better be prepared for my revenge.