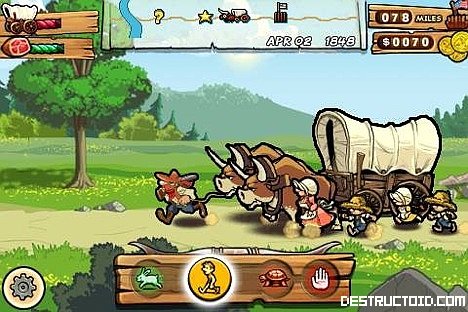 Gameloft just released a load of screenshots for their iPhone version of the Oregon Trail. Seeing the screens made me think of you and the adventures we had together. I know I killed several of your children, let your wife get dysentery, and often flooded your wagon. I know I drove you to exertion on those hunting missions that eventually resulted in the extinction of the great American buffalo and brown bear. I wrote because I wanted to tell you that I’m excited about Gameloft’s reimagining of the game, and that I cannot wait to put you through hell all over again.

You don’t have to be thrilled — honestly, I don’t care if you are or not — but there are some new things you need to know about. Gameloft is adding new skill-based minigames that use the iPhone’s accelerometer. They’re also adding side missions to vary your suffering trip.

Anyway, I have to get going now. I’ll see you, Banker. Sleep while you can.