Owchemy Labs’ Alex Schwartz is one of the bravest men I know. In the midst of GDC, perhaps the most inside baseball-heavy of all conventions, he told a member of the press that Dyscourse was a “survival game.” Of course, that phrase was immediately followed by caveats, but to use a genre descriptor that has become an enormous red flag takes an enormous amount of courage.

It also takes a great deal of faith in your game, which, as it turns out, is well-earned. Dyscourse is like Telltale’s The Walking Dead filtered through old-school LucasArts. There are branching narratives, witty dialogue, an eclectic visual style, and choices that will affect whether a character lives or dies. But there’s also survival. Except it’s not actually survival. Follow me so far?

“[Dyscourse] is a story that happens to be about survival,” Schwartz clarified. In Dyscourse, you play as Rita, an artist turned barista who has crash landed on a deserted island with a motley crew of “useless tourists.” By virtue of being the player character, Rita will determine the group’s focus, be it escape attempts or long-term survival plans. Is your time better spent gathering water or building a giant SOS out of driftwood? It’s a very basic risk/reward system, but what sets the game apart is just how different each playthrough will be.

There are no superficial choices. When a character is injured or insulted, that will affect how effective they will be. There’s even unique character models for exhaustion, described by Schwartz as multiple levels of “dishevelment.” Since each in-game day contains multiple opportunities for physical exertion and mental exhaustion, there’s a good chance you could end a day with a dead survivor, or at least a very incapacitated one. Post-day conversations allow you to potentially mend broken bridges. However, broken bones are another story.

According to Schwartz, the game contains an enormous amount of content. “There are about 80,000 English words in the game,” Schwartz said. “So if an American novel is about 100,000, our writer basically wrote a full novel.” A standard playthrough will only see around 15% of that 80,000. 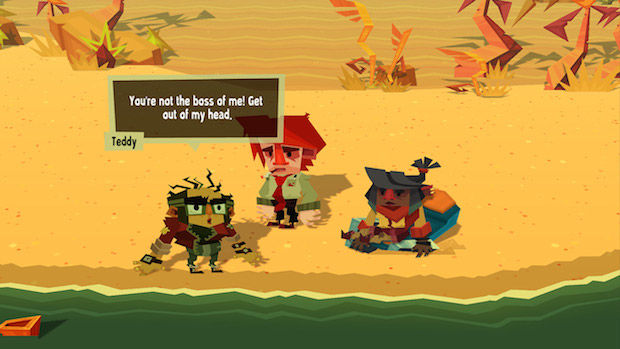 It also seems like the team at Owlchemy has succeeded in making their characters feel memorable. Schwartz recounted an anecdote from earlier in the week where a GDC attendee was praising a survivor’s competence, when a total stranger who had demoed the game earlier in the week stopped to accost the attendee. In the other person’s mind, that survivor was bringing the whole group down.

I played Dyscourse on an Xbox One controller hooked up to a PC running a “near-final” build of the game. It played quite well, leading me to ask whether the game was headed to consoles. According to Schwartz, they’re “talking to everybody” about bringing the game to other platforms, but right now they’re focusing on the Steam version. They have to be focused; the game comes out in just under three weeks.

I’ll certainly be giving Dyscourse a look when it comes out. The game’s sense of humor really works for me and the art style is memorable.

There’s also a free expansion planned, starring a host of indie developers (Tim Schafer, Rami Ismail, and more) who get stranded on the island on their way to GDC. In my mind, that’s the real reason to pick up the game. The branching stories and clever dialogue seems like a nice bonus.