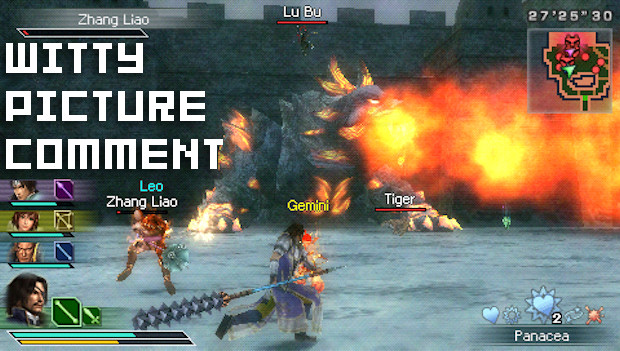 Even though I’m a Dynasty Warriors fan, I’ll gladly admit that the series has been one long rehash. That’s why I’m quite interested in Strikeforce, which hopes to use Monster Hunter style four-player co-op and character customization to reinvigorate the franchise on PSP. I briefly played it in Tokyo last year, and noted some rather uncharacteristically aggressive AI and a pretty big boss fight.

The game is out in North America on April 28, and although the chances of me finding other players with a PSP and a copy of the game are minimal, I’m still looking forward to checking it out in full. In the meantime, Koei let us know of a huge batch of screenshots, which you can look at with your eyes in our gallery.

My one hope is that Koei eventually realizes that home consoles have online functions, and that DW could be thoroughly reinvigorated with some online hack n’ slash action. It’s great to support the PSP, but come on — this game was made for the PSN and Xbox Live.

Burlingame, CA – March 11, 2009 – KOEI, recognized worldwide as the premier brand of strategy and action games, today announced that after an overwhelmingly successful release in Japan, DYNASTY WARRIORS®: Strikeforce is now ready to take on North America.

The multi-million selling Dynasty Warriors® series has long been renowned for pitting a lone warrior against an army of thousands. The upcoming and highly-anticipated action game reinvents the Dynasty Warriors brand of action into this year’s hottest multi-player experience on the PSP system.

DYNASTY WARRIORS: Strikeforce will be available at retailers beginning the week of April 28, 2009. Consumers can pre-order the game now at Amazon, Game Crazy, GameFly, and GameStop.

End of level bosses await intrepid heroes with a multitude of guises and deadly attacks while enemies spread throughout each stage possess much greater levels of intelligence and more powerful attacks. So now more than ever it’s imperative that players work together as a team and find ways to overcome the challenges and obstacles that stand between them and victory.

New “Fury” transformations give characters even greater supernatural abilities and attacks, including lightning fast speed and the ability to fly. Warriors can now take to the skies and face off against their foes in spectacular aerial combat.

Later this year, KOEI will offer new content for DYNASTY WARRIORS: Strikeforce. Additional quests will be available free-of-charge, exclusively through the PlayStation®Store.

DYNASTY WARRIORS: Strikeforce is developed by Omega Force and is for 1 to 4 players. Multi-player play is via ad-hoc mode only. This game is rated “T” (Teen- Violence) by the ESRB. For more information, visit www.koei.com/strikeforce.