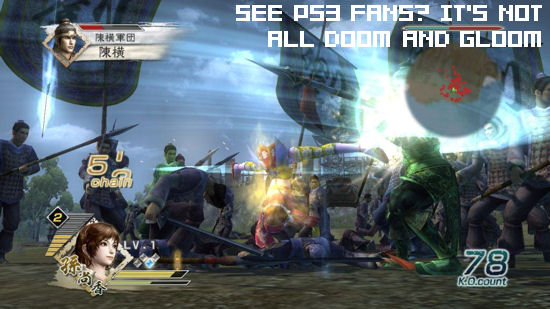 This should come as no surprise to anybody with a brain in their decaying skulls, but Dynasty Warriors 6 is a big deal in Japan, and has sold far better on the PS3 than the 360. Now isn’t THAT a shock? Compared to a meagre 22,000 copies of the game sold for the 360, the PlayStation 3 version has shifted a musou-worthy 188,000. DISHONOR IS HAD!

Koei Warriors is reporting that the game flew in at number two in the Japanese charts, which is actually a step down — the series usually takes the number one spot without fail, but was up against Mario Party DS, which had a sales headstart. It also claims that PS3 sales spiked on the strength of DW6‘s release. Good times for Sony.

Tipster Electro Lemon also directed me to Kotaku‘s comparison of the two versions side by side. Apparently, movie scenes look clearer on the PS3 and clouds look better, while in-game battles appear roughly the same, save for the 360 rendering things a little darker.

While Dynasty Warriors 6 doesn’t have a hope in Hell of doing those kinds of numbers in the West, it’ll be interesting to see where its sales actually go. There’s no contest between an American and a Japanese console in the latter’s home country, but could the traditionally Sony-loyal Dynasty Warriors give Sony a shot in a arm elsewhere? I be skeptical.