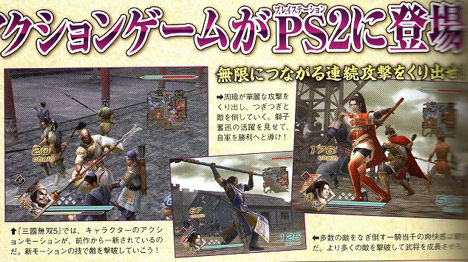 My brain is leaking while trying to find the logic in all of this, but Koei is planning to release Dynasty Warriors 6 on the PlayStation 2, and it’s actually going to be better than the PS3/Xbox 360 versions. Yes, the first current-gen Dynasty Warriors is going to be superior on last-gen technology.

Not even I can defend this one.

Billed as Dynasty Warriors 6: Special, the main draw here is that some of the shockingly rampant cloning from DW6 is being taken out. So far, it’s clear that Cao Pi, Ling Tong and Ma Chao will actually have their own weapons, movesets and musou modes, instead of being carbon copies of other characters.

I’m all for de-cloning. The cloning in DW6 was absolutely appalling (some characters were copied three times over) and if I’d have known it was that bad, I would have been more harsh toward the game. With that in mind, I still can’t understand why more effort is being put into the PS2. At the very least, I would like to see some sort of DLC address the clone issue for the Xbox 360/PS3 version. Apparently that’s not how Koei plays ball.

This is all backwards moon logic to me.