From the makers of Dead Island

Okay, take Dead Island‘s entire concept, subtract the role-playing mechanics, throw in freerunning features akin to Mirror’s Edge, and set it all in an open world that features a day-and-night cycle where things become way harder at night like in Minecraft or DayZ.

That’s Dying Light in a giant nutshell. Warner Bros. is publishing this Techland-developed game, and they showed off a demo for the new zombie survival title at a recent pre-E3 meeting. While the premise looked cool, I’ve learned the hard way not to get excited for one of Techland’s games until I’ve gotten actual hands-on time.

And when I said take Dead Island‘s entire concept, I mean that quite literally. It’s blatantly the Dead Island engine in use here, for better or for worse.

The premise of Dying Light is that a group of survivors have been trapped for two months in barricaded safe zones. There’s some kind of zombie infection, and your poorly voiced and acted character has to scavenge and loot during the day in this survival action game set in a vast open world.

The demo begins with your character seeing a plane make two cargo drops filled with supplies. We immediately get to see some of the first-person freerunning features in action as your character rushes towards the drops before it gets dark. Your character is quite nimble and can climb virtually anything from buildings to telephone poles. This freerunning mechanic extends to combat, allowing you to pull off moves and attacks quickly. Your character’s skills and abilities can be customized as well.

There are over 1,000 weapon possibilities, from plain melee objects to weapon crafting. One crafted weapon we saw was a machete combined with a taser so you can shock zombies as you slice them. Where have we seen that before? And yup, you’ll even have to repair weapons as they can get damaged. 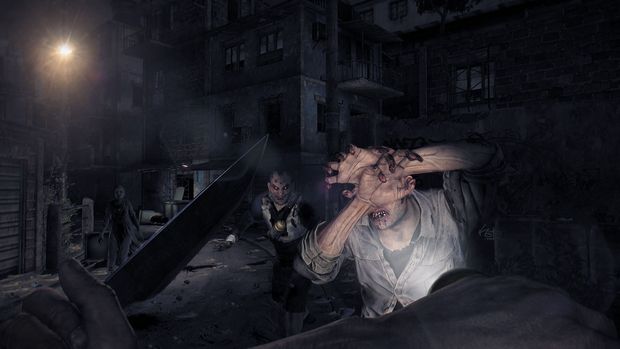 The area you’ll be exploring is filled with zombies, and they’re identical to those found in Dead Island. They’re slow, lumbering, and can be cut up into pieces depending on whatever melee weapon you’re using. The one difference is that there’s this X-ray effect in place, so you get to see where you’ve broken bones on your enemies. Kind of like in Mortal Kombat, except it seems out of place here. I mean, does it really matter if you break a zombie’s bone?

Zombies will also come in multiple flavors, such as one we encountered later that pretty much was the Tank from Left 4 Dead. It was huge and able to throw cars and other large objects at the player. Nothing original there, but I do love that you will be encountering some people who are in the process of turning into zombies. It’s fresh if a little jarring. They’ll act like a normal zombie, but once you inflict damage on them they’ll scream out in pain like a normal human would.

Oh, and guess what? You’re infected with the zombie virus too — this is a big part of the game. Somehow the virus has given you one ability that lets you detect enemies by sending out a pulse wave — essentially echo location. 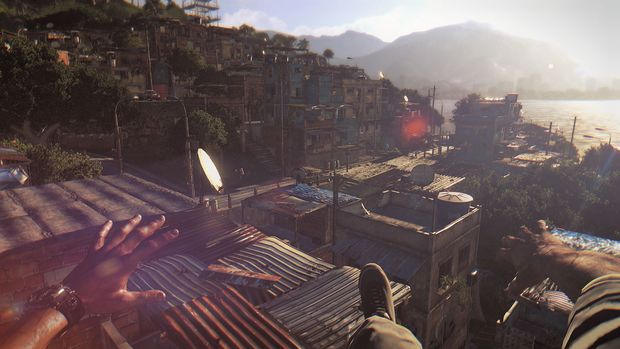 On the way to the drop, you’ll hear a little girl screaming, and you’re free to investigate the source or just keeping going with your mission. Side missions will be randomly generated for you to seamlessly take on, and in this case you’ll inspect a building to find a little girl hiding from her father who just turned into a zombie.

After this distraction, the player makes their way to the first drop, but a group of opposing heavily armed humans get to it first. You can’t take them on, so you head towards the second drop instead. There’s going to be a lot of freedom in how you approach battles, and in an instance like this you could lead a group of zombies towards enemy humans to give you an upper hand.

It’s nightfall by this point, and that’s when the more dangerous monsters come to play. After recovering some medicine, you’ll have to make your way back to your camp; you should be able to get back without ever encountering a fight or getting spotted. For the demo though, the player does get spotted and some kind of giant dog-like creature chases after you. This sequence shows off the best of the freerunning mechanics as you hop over obstacles and vault over zombies while fleeing from the creature. 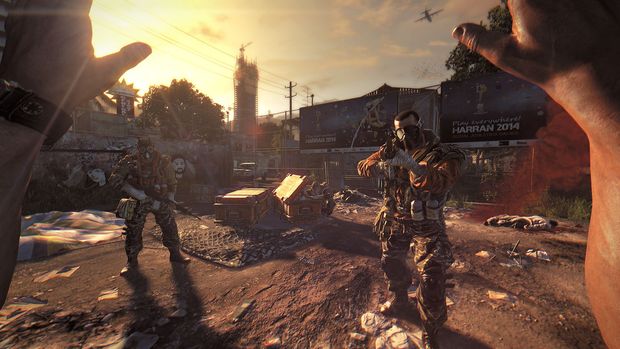 Dying Light has a lot of potential. The visuals look great, and what I saw looked highly detailed and pretty realistic, from the world to the zombies. The demo was shown off on a PC on par with what we can expect from next-gen consoles.

The freerunning stuff looks like it could be better than what we got out of Mirror’s Edge too, as there seems to be more freedom with what you can climb. That all said, I can’t get excited for this one until I have a controller in my hands and see for myself just how much freedom will be given to players.