After a few hours with Dying Light 2, we’ve seen some new heights, but still have a few questions.

The world of Dying Light 2 Stay Human isn’t quite the usual zombie post-apocalypse. Most zombie worlds involve survivors moving from place to place, holing up in whatever building might provide a moment’s refuge from roaming zombie hordes. But in a hands-on with Dying Light 2, we got to see the City for all it entails: a struggle not just for survival, but also to decide who gets to build over the rubble.

In the world of Dying Light 2, the infection has been around for a while. It’s not that zombies aren’t a threat; it’s just that they’re an understood danger factored into daily life. And in the City, there’s still plenty of real estate to expand to and even inhabit, especially if you stop looking out and start looking up.

We got to go hands-on with Dying Light 2 Stay Human for a few hours, playing two sections of the game over a cloud connection. My gameplay section started in Old Villedor, as protagonist Aiden was searching for a way deeper into the city, negotiating with the Peacekeepers (or ‘PKs’) and local survivors, many of whom gathered in a community dubbed the Bazaar.

Being dropped directly into the story, it was a little hard to track what the broader narrative beats of Dying Light 2 are. Aiden is clearly on the hunt for something, and whatever it is involves his sister in some way. Depending on certain dialogue choices, I was able to subtly coax some details out. But the real draw for me was in the side stories and individual characters.

The Bazaar’s plot follows Sophie and Barney, a pair of siblings who struggle to lead, both against the Peacekeepers’ domineering command of the region and working in the shadow of their mother. Their personal beats end up driving the main story in Old Villedor, and they work very well. 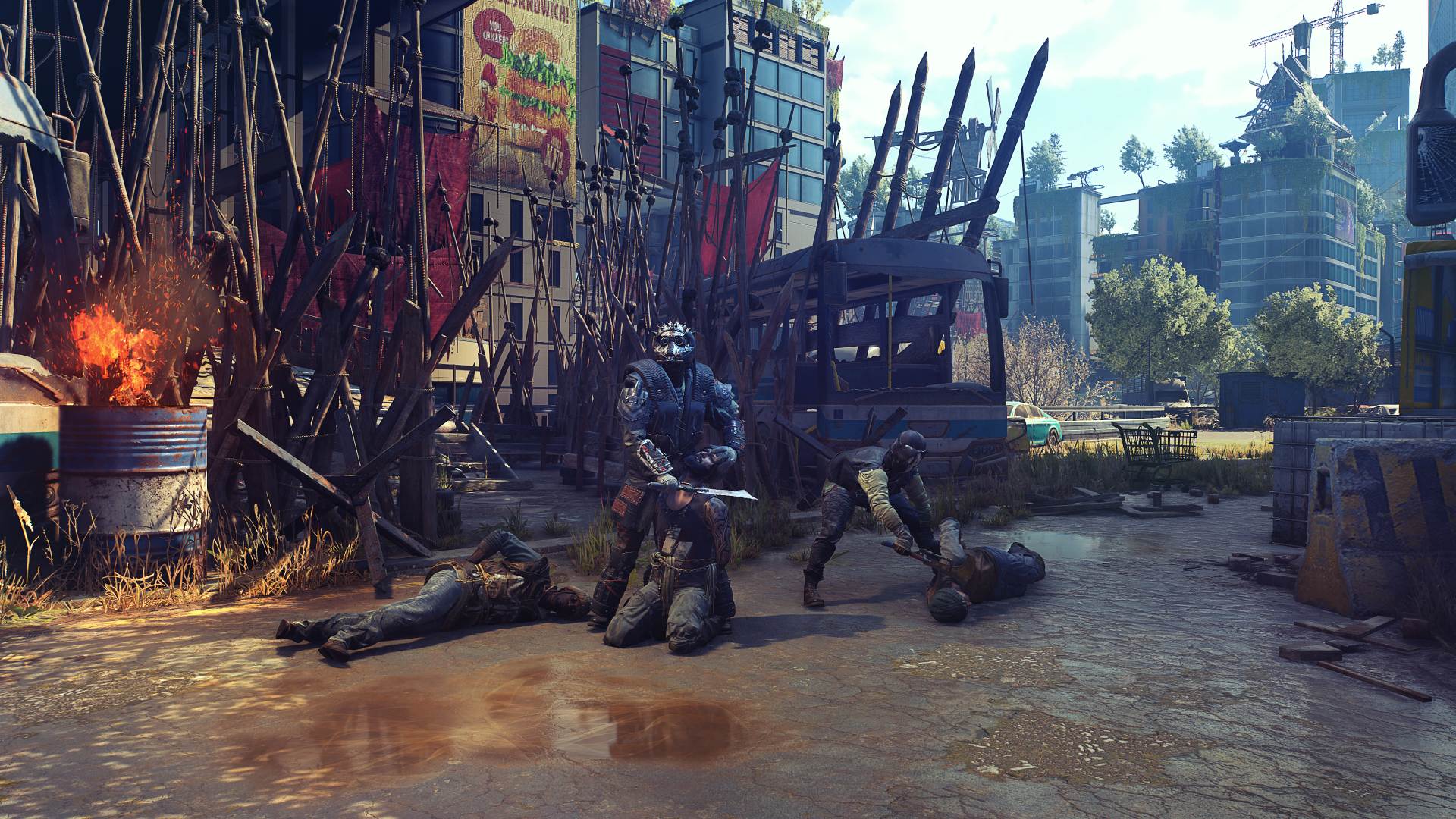 Even further off the path are side quests, found both during the day and at night. While the sun was out, one of the first characters I ran into while playing was a singer with not so much talent. She was trying to croon from the rooftops, but had stopped performing in the bazaar after losing her mink-fur stole to the wind. So, I volunteered to recover it.

The ensuing chase led me further and further up a massive building, until I was literally perched atop an antenna. I had the stole, and I got a pretty good look around the area while I was there. It was massive. And it was vertical, in ways I’d soon become quite familiar with.

One of the coolest things about Dying Light 2 to me so far is the actual world itself. The survivors living in the city have built up, constructing rooftop settlements and resources. As I ran along the roofline, I’d breeze by a garden, supply cache, or several survivors talking around a fire. This isn’t to say the streets are barren; the Bazaar itself is walled off on the ground, but even internally, it turns all the empty vertical space into room for more rafters and lofts.

And once you leave those walls, you’re on streets dominated by the infected. It can, at times, feel like a game of “the floor is lava,” as it usually benefits Aiden to stay off the roads. But it also makes the moments you dip down to ground level feel really tense, heightened even further if it’s because you’ve missed a jump from one platform to another. 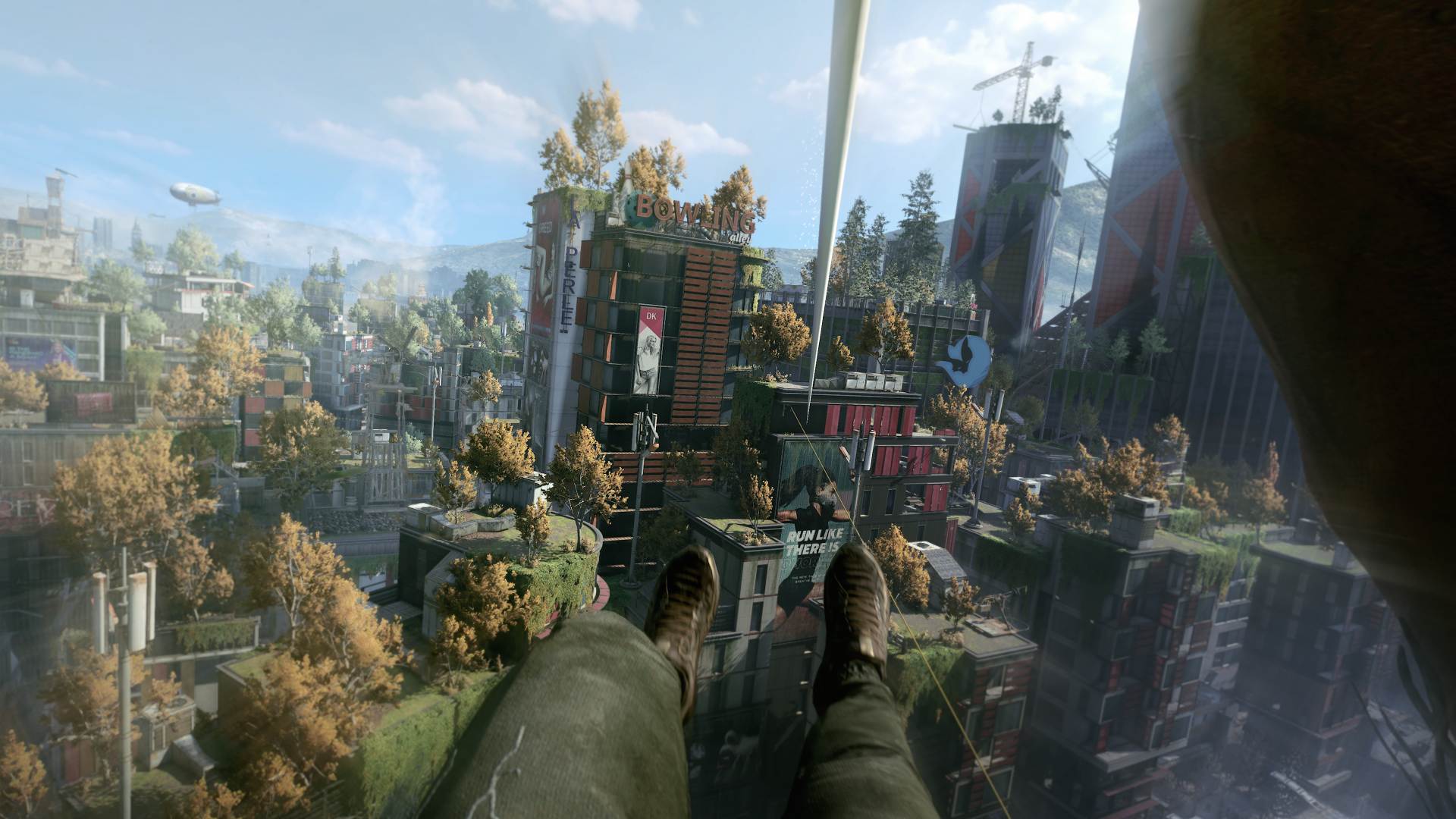 The first-person parkour-platforming works, for the most part. Due to the cloud-based nature of my play session, there were a few times I definitely chalked up to latency. In other instances, I did still feel a bit frustrated with trying to get Aiden to do what I wanted him to do. As parkour abilities stack up, I’d sometimes run into situations where I was wall-running when I just wanted to jump, or other stutters. When the traversal flows well though, it really does click like it did in the first Dying Light.

Windmills offer some of the best moments for this parkour action, as they each provide small vertical challenges to overcome. The reward for solving the moving platforms and tricky jumps is a new settlement, established under the newly re-established windmill. These havens end up providing a nice respite from the undead, and a way to turn the clock from day to night or vice versa.

When the sun sets, the undead become much more than mere obstacles. They’ll start to inhabit more areas, chase you farther, and can even initiate dangerous attacks from heightened, more powerful undead. Combat is important here, as it is everywhere else. Dying Light 2 focuses a lot on melee combat, with a wealth of close-range weapons to choose from with improvised attachments. There are still a few ranged options, like the stealthy bow and javelins, but I spent most of my time in frantic melee combat, parrying and dodging, using my parkour skill to occasionally grab the upper-hand when I’m outnumbered. Or, at night, simply fleeing out and away from the scene when things got too hot.

The benefit to heading out at night is, as always, more rewards. Nighttime brings the infected out of their own safe spots inside, which opens them up for looting if you’re stealthy and fast. Some side quests also appear at night. One I played involved searching for a woman’s lost lover, who she feared was in danger from her overbearing brother. The resolution of that side plot was surprising, and one of the highlights of my time in Dying Light 2. 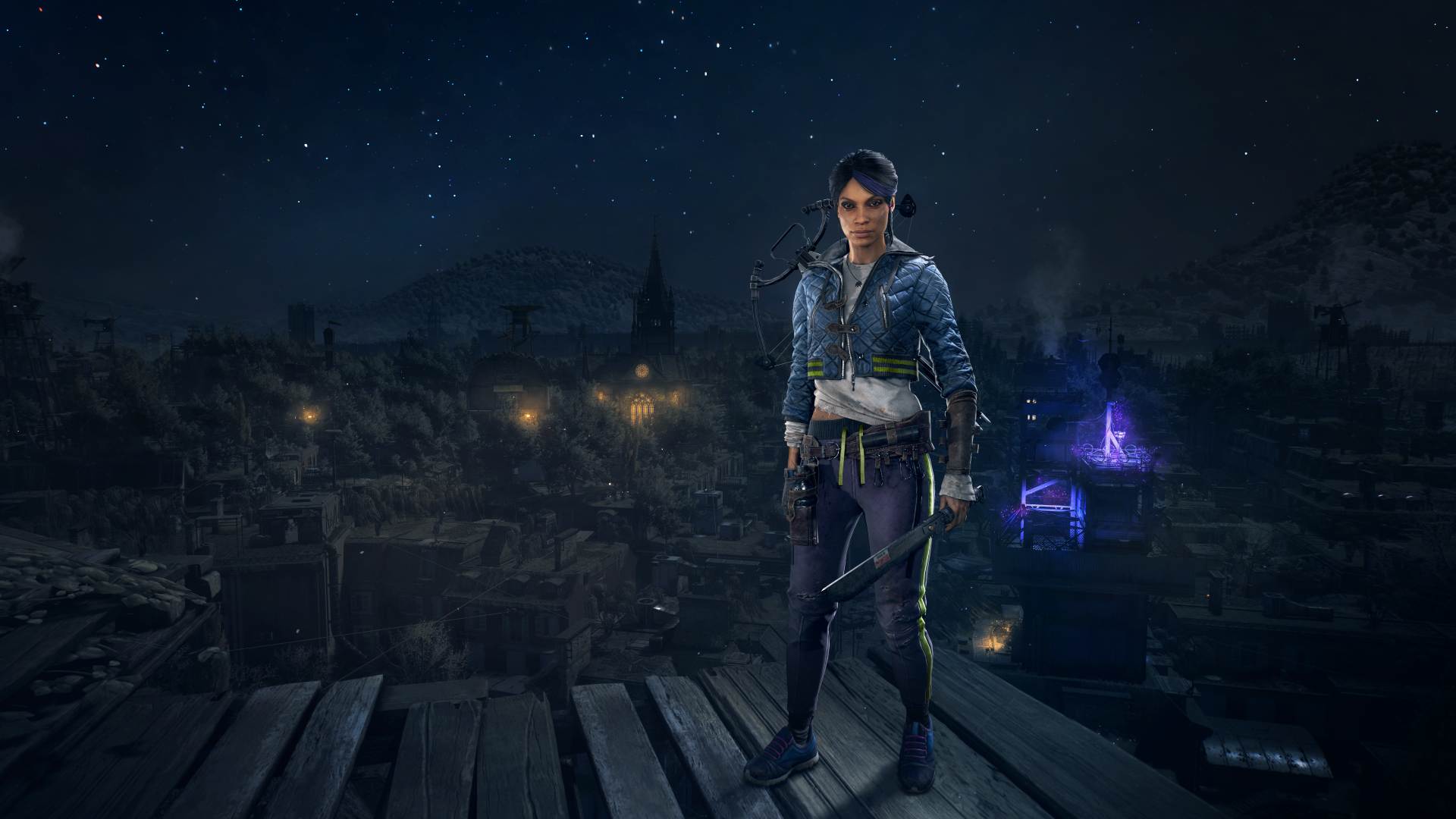 There were still some hitches, however, that pulled the experience down a bit. Some voice lines just didn’t play out, leaving some awkward moments of standing there waiting for the next line. Undead and inanimate objects would sometimes clip into the environment, in ways that aren’t too uncommon for open-world games. It’s nothing major though, and certainly points I’d hope Techland hits with the extra time they’ve allotted themselves.

Most of the Old Villedor section felt like a continuation of Dying Light 1. I spent most of my time doing lots of parkour action, searching for supplies, and managing the local politics as Aiden tried to play both sides for his own advantage. It was all very solid and fun, but Central Loop—the second section of my Dying Light 2 preview—felt like a slice of what Dying Light 2 is doing differently this time around.

First off, it strongly features Lawan, portrayed by Rosario Dawson. Yes, it’s a celebrity in a video game, but she didn’t seem overly utilized and fit naturally into the story beat. As we ventured around bringing power back to this section of the city, using cables to solve some neat puzzles, she gave Aiden a personal glider. And let me tell you, gliding is a blast. 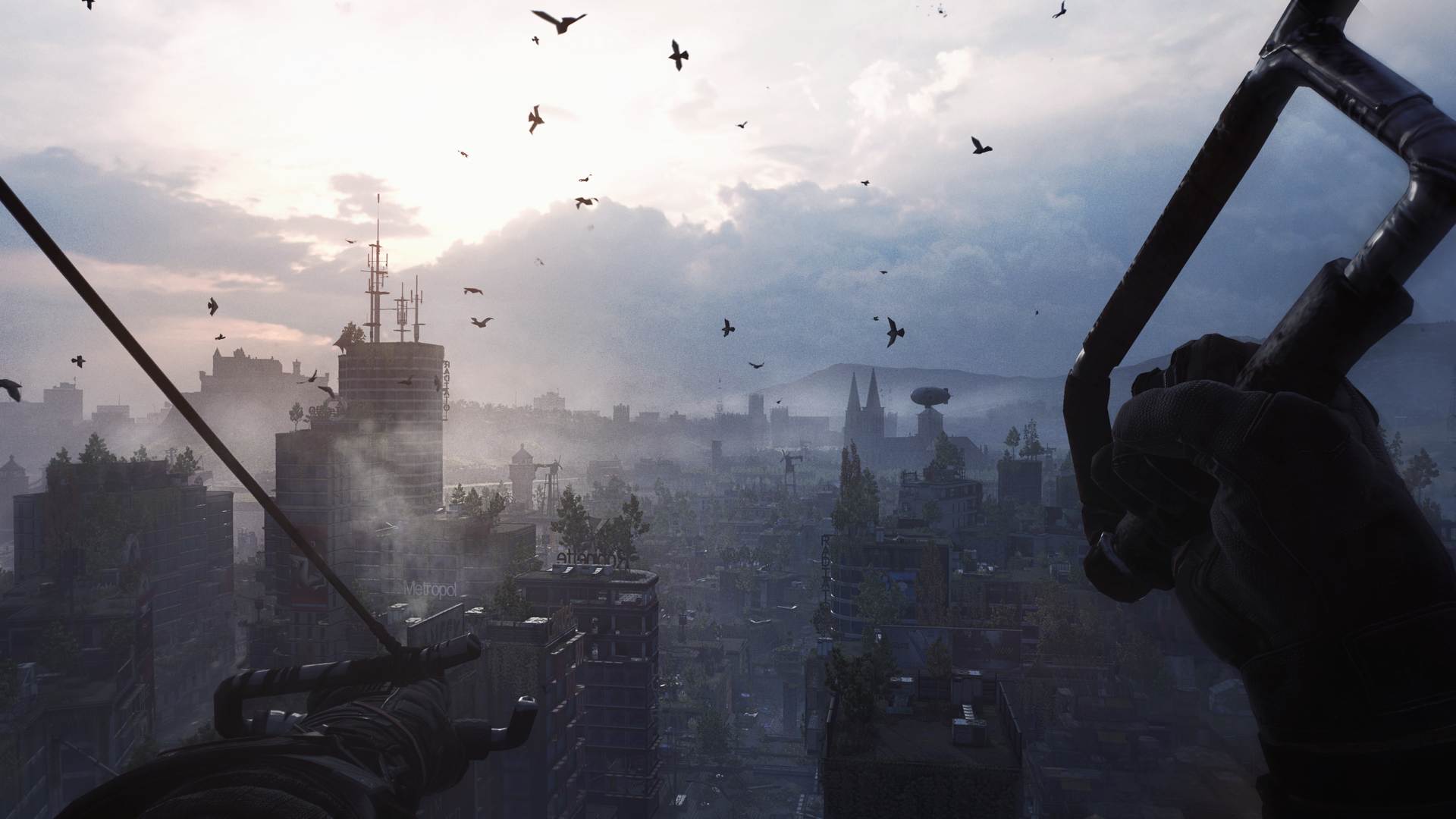 The Central Loop area is even more vertical by nature, as it takes place in the skyscraper section of the city. Here, massive buildings with glass windows tower up overhead. Navigating this area was less about building-to-building parkour, and more about using the glider to navigate large swathes of land, using wind gusts and careful handling to not plummet into the ground below.

It felt incredibly rewarding, and melds in with the parkour very well. It wasn’t long until I was leaping from one skyscraper, comfortably navigating treacherous winds to touch down in another. Once inside, I’d have to wall-run and leap my way around a horde of infected who were now acutely aware of my presence, and then leap out the other side to continue on my way.

This section culminates in a really fun rooftop defense segment, where you’re leaping from building to building in order to take out cannons that are firing on a local settlement. And again, what surprised me is how natural it felt. It didn’t feel like I’d ditched free-running for the glider, but like my world had expanded a bit more to accommodate new movement into the mix.

I’m still curious to see how the whole package of Dying Light 2 actually comes together. The pre-demo blast of story that got us up to speed for our slice of the game raised a lot of questions. And I’m really curious about how all these areas will be linking together, and what the long-term ramifications of choices will be. Some I made were small, like who gets to control a power substation. Others seemed much larger, with broader implications.

My main takeaway is that Dying Light 2 Stay Human certainly doesn’t feel like a retread. Old Villedor gave me a big slice of an improved blueprint, and Central Loop let me peer a bit into the new future. There’s some tuning to be done, but the world of Dying Light 2 definitely has my attention.