Techland has all the right pieces

I’m in a real weird place with Dying Light. I had always intended to get Techland’s parkour zombie survival game out of my backlog at some point, but its lackluster story has kept it permanently frozen on my to-play list. Now that I’ve come away from E3 having seen the great strides being made in Dying Light 2, I’m so warmed up to the sequel that I’m not sure I can get invested in the original.

You may not hear about Dying Light all that much, but the game was a “tremendous success” for Techland. According to DL2 lead designer Tymon Smektała, it has attracted some 13 million players. Three years after launch, there are “half a million players” per week still logging onto the servers.

With Dying Light 2, the studio hopes to keep what worked, fix what didn’t, and expand wherever necessary. For my purposes, the main takeaway is a more compelling approach to storytelling. The game is set “15 years since humanity lost its war with the infected.” You’ve just arrived in a fictional metropolis called The City, “probably the last human settlement still struggling to survive.”

Smektała spoke about the team’s desire to craft a “narrative sandbox,” one in which players will transform The City — their city — through actions, dialogue choices, or even just exploration. The video embedded above is an abbreviated look at the 20-minute-or-so demonstration I saw at E3.

“This is quite an ambitious undertaking so we knew we needed some help,” said Smektała. “And we got that help from Mr. Chris Avellone [Planescape: Torment, KOTOR II, Fallout 2, New Vegas], who’s the narrative designer on the project. He’s the master of nonlinear storytelling — he’s a legend in that field. He was able to share his experiences, his knowledge, for us to be able to pull this off. And we also are working closely with some of the members of the Witcher 3 writing team [at Techland Warsaw]. Those are the guys responsible for some of the best quests from that game like the Bloody Baron questline.”

The hands-off demo had the player character investigating a water tower, which played out like a navigational puzzle as they clambered their way up to the top with some creative acrobatics. Smektała described this sequence as a “parkour puzzle,” adding that “Sometimes you just have to [quickly] execute a difficult parkour move without a mistake.” In the case of the water tower, the player went slow and steady, making sure not to waste a single ounce of stamina on unnecessary moves.

The platforming looked tricky, both in terms of mentally mapping out a workable route and actually executing consecutive wallruns and jumps. Our demo player fell to his death, but to his credit, it was the last day of E3. Physics-based parkour objects with a mind of their own will spice things up. 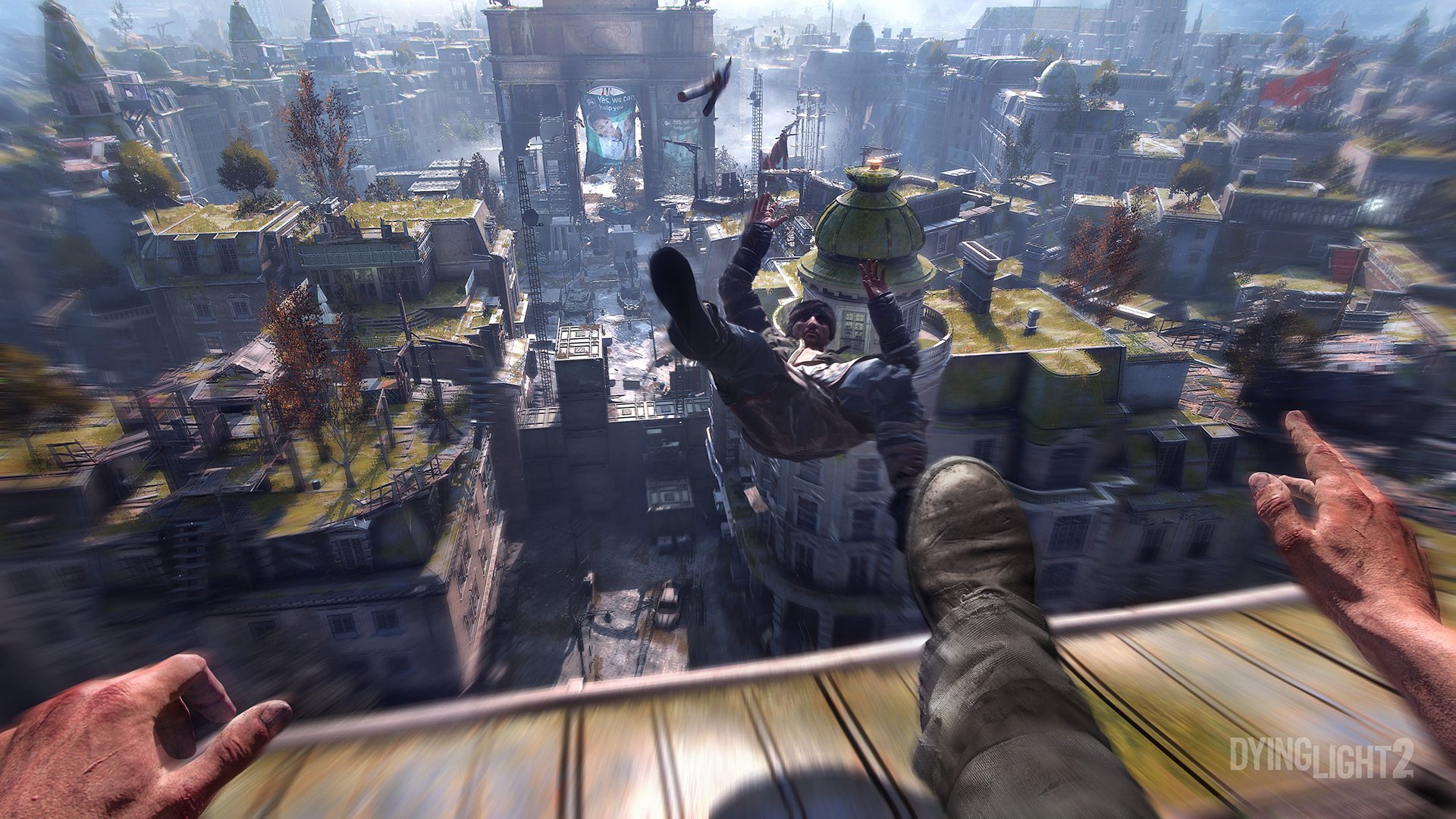 Techland showed the aftermath of two possible story scenarios atop the precious tower. One of The City’s factions, the Peace Keepers, had sent an emissary to scout it out. By the time you get there, he’s long gone. Instead, you find two questionable-looking men, Jack and Joe, who insist that “negotiations hit a wall” and “he hit the ground.” You can talk it out and come to an agreement, or you can fight them and find yourself in the good graces of the Peace Keepers. Both choices ripple out into the world.

If you side with ol’ Jack and Joe, you get a cut of their profits from the water, but the surrounding area will be unkempt and more prone to ne’er-do-wells. If you go along with the Peace Keepers, they’ll clean up the streets and offer free water, but they seem pretty quick to hang folks they deem miscreants. Moral dilemmas aside, your traversal options will also be impacted based on how things shake out.

The world of Dying Light 2 is “about four times as big as all of the maps from Dying Light combined,” so Techland should have plenty of room to create distinct pockets of society within The City. 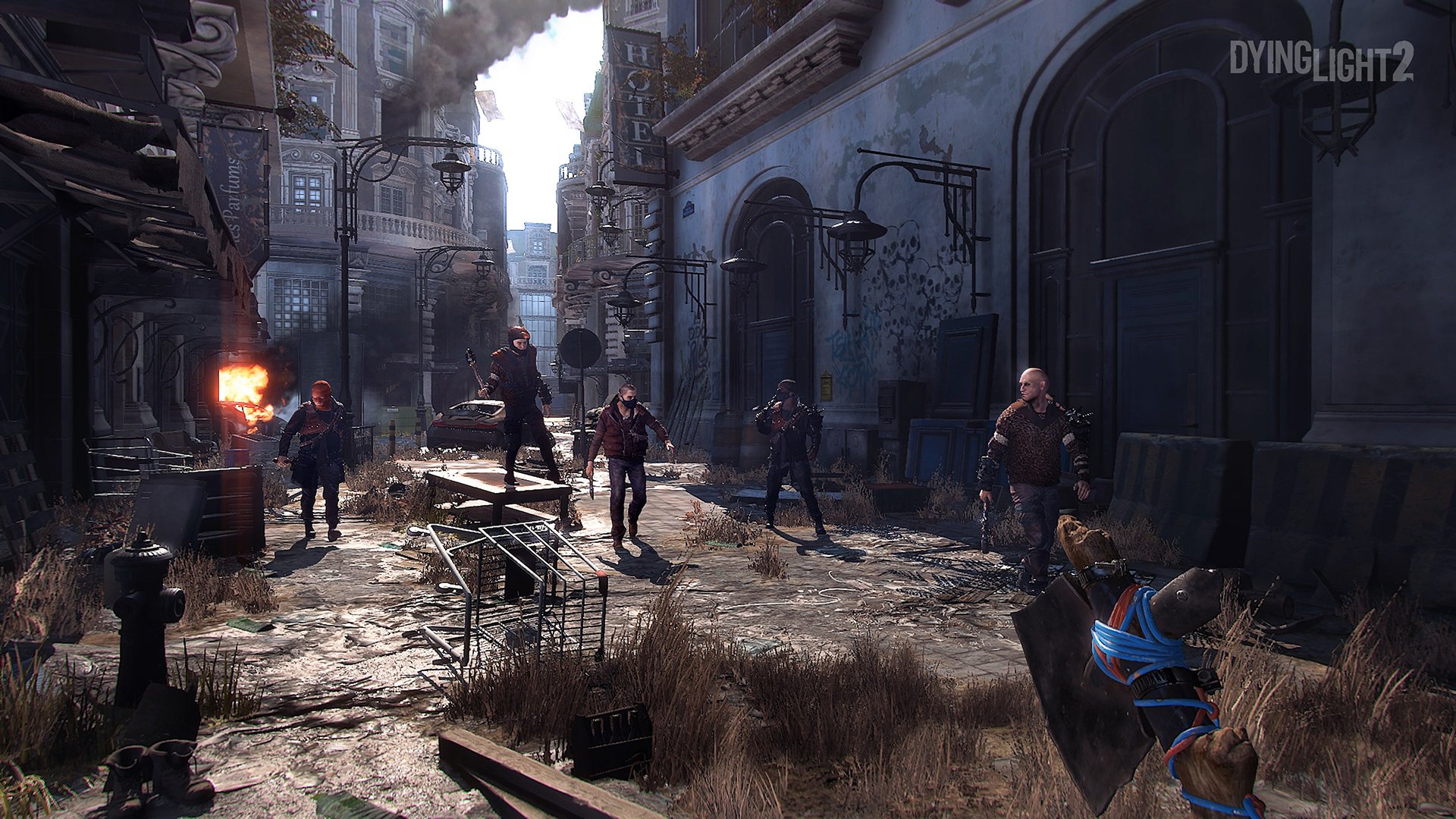 Dying Light 2 will retain four-player co-op support. “We designed it so your friends cannot mess the game for you,” said Smektała, “but they can witness how you make those choices and they will see the outcomes of those choices.” As such, when you’re in another player’s session, you’ll be able to make character progress — but you won’t be able to push your personal storyline forward.

Asked to elaborate about tweaks to the day/night cycle, Smektała said that “night was scary in the first one but it wasn’t complex enough. It was quite a one-dimensional experience.” In Dying Light 2, “it is more scary, but at the same time you have more control.” Techland’s E3 demo was set during the day, so we only ever saw infected huddled up and hibernating inside cold, dark buildings. Make too much noise around them or poke the nest, so to speak, and you’ll need to run like hell.

“This world is based on a lot of rules that we designed with the help of Chris Avellone,” explained Smektała. “One of those rules is that day is for humans and night is for the infected. They roam with huge hordes of the slow-moving ones. The fast-moving ones are in packs running on rooftops trying to get you. This is a game of two halves that work with each other.”

Admittedly, I only had moderate expectations coming into the Dying Light 2 demo, but I left feeling like we now have another great game on the 2019 release calendar. Even if the world-altering choices aren’t as numerous or substantial as Techland suggests, this one should be a no-brainer.