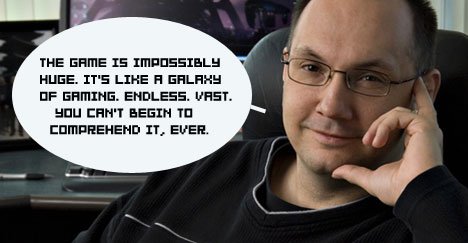 Kizuko recently interviewed the king of tasteful game promotion, Denis Dyack, and managed to find out a range of interesting information about Too Human, including that it can take between “15 and 80 hours to complete” and that all the loot in the game is “probably not possible to get – not for a single person.” Denis tastefully omitted that shooting your gun in the game is equivalent to using a gun as a ball-jointed doll with a spring loaded into its arm.

To expound on the completion time, Denis explained that the first playthrough can take about 15 hours, but to reach level 50, players would have to pour anywhere from 50 to 80 hours into the epic saga. Of course, he’s hardly out of ideas even though Too Human is about to come out, sharing this information about future titles:

“The story was done a long time ago,” he said. “The theme of the first game is discovery, the theme of the second game is revenge, and the third game, enlightenment.“

“And the trilogy and the whole idea of focusing on the Norse mythology and effects on technology we think is really going to turn people’s heads.“

You know the really twisted aspect of all this is that all those plans would sound great … if I didn’t know that they were said by the same guy who baited NeoGAF forum members to be “owned” by Too Human. Let’s hope that Dennis’ future projects reek of slightly less self-righteous supremacy.

[Via Bit-Tech — Thanks, Jonathan]