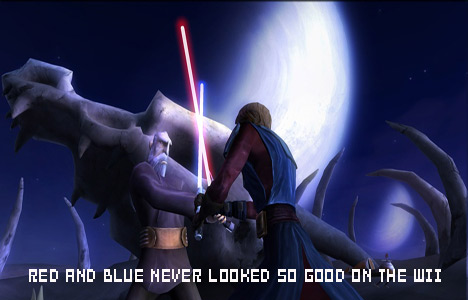 As Dale highlighted earlier this morning, LucasArts has no intention of attending this year’s muted E3 summit, but that doesn’t mean that good old Georgie blew his load with The Force Unleashed, and has nothing left to show. In fact, depending on one’s console(s) of choice, the best may be yet to come.

Thanks to Venture Beat, we finally know what that lightsaber battle game is that’s been shrouded in secrecy for so long: Star Wars: The Clone Wars — Lightsaber Duels, an exclusive for the Wii. If your curiosity has been piqued, and you wonder just how well the game is suited for Nintendo’s fabulous Wiimote, then you are going to want to pay close attention to Ken Fox’s recent interview with IGN:

“We’ve tried to make the lightsaber control as intuitive and fun as possible. It’s not a Lightsaber simulator, but when you swing your Wii remote left to right; your character does the same. You use the thumbstick on the nunchuck to move your character and swing the Wii remote to swing your Lightsaber. The buttons all do cool stuff like use the force, block and dodge, but the focus is really on putting the Wii remote in the players hand and saying ‘This is your Lightsaber!'”

Continued after the jump:

“I wouldn’t describe what we’re doing as one-to-one in the way that you might picture, but we really tried to make it feel like you get to swing your Lightsaber ‘manually’. In short, it feels like the most natural and convincing sword type experience I’ve had on the Wii. And on top of that, it not just a sword, it’s a lightsaber.”

Come on now, you weren’t really expecting the Wiimote to be capable of completely mimicking actual (were there such a grand thing in real life!) lightsaber battles… right? Nonetheless, LucasArts promises the finished product to be the best use of the Wiimote to date. With multiplayer being a given, this might be the game that reminds fans that the Wii remains a viable source for Star Wars entertainment. Are you buying it?

[Via Venture Beat and IGN — Thanks, Jonathan]